The Daily Nexus
Science & Tech
Anticipating Effects of Global Warming on Marine Biodiversity
April 9, 2015 at 6:00 am by Kendra Witt 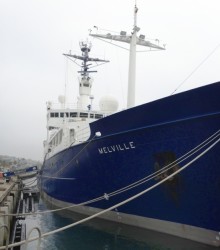 Hidden in its depths, the Santa Barbara basin contains a trove of ancient marine specimens, providing a glimpse at how marine biodiversity changes over geological ages. A recent study published by the Proceedings of the National Academy of the Sciences found that major warming events occurring at the end of the Pleistocene Epoch led to extensive reorganization of ocean floor biodiversity. The effects of natural climate shifts on marine environments could bear important implications for understanding the outcome of anthropogenic climate change in the future.

The research team, which included UCSB professor James Kennett, UC Davis postdoctoral scholar Sarah Moffitt and colleagues from the California Academy of the Sciences, extracted a sediment core from the Santa Barbara basin, a fossil archive representing the end of the last glacial period 16,100 to 3,400 years ago. The published study details the methods used to quantitatively assess the core, which contained over 5,400 metazoan microfossils of species such as clams, snails and sea urchins.

According to the paper’s co-author, Kennett, professor emeritus of marine and earth science at UCSB, the broad temporal span of the basin’s sediment record makes it an ideal site for examining the effects of deoxygenation.

“The Santa Barbara Basin sediment record is unsurpassed by anywhere else in the world’s oceans for studying high resolution climate change. There’s no other place in the world that’s as good,” he said.

Lead author Moffitt, a postdoctoral scholar with the UC Davis Bodega Marine Laboratory and lead author of the PNAS paper, valued the immense biodiversity present in the sediment core.

“I was surprised by the amazing wealth of biological diversity that was preserved in the sediments across all of these taxonomic groups that have never been described well in marine sediments before — particularly the presence of really beautiful trace fossils, which are evidence of predation and trophic interaction between species.”

Among many global consequences, anthropogenic climate change has been predicted to lower levels of oceanic oxygen, leading to widespread effects on marine biodiversity with unexpectedly slow recovery times. Similarly, the results of the study displayed how small fluctuations in oxygen levels cause long-lasting shifts in seafloor ecosystems.

“This evidence shows how very sensitive the deep sea is to oxygen changes,” Moffitt said. “It shows us that when Earth systems are perturbed, such as these ocean circulation systems, those disturbances can commit ecosystems to many hundreds, if not thousands of years of recovery.”

In the past, related studies of sediment cores have focused on a group of benthic protozoans called Foraminifera. According to Kennett, this investigation is different in that it examined the responses of a range of taxonomic groups.

“Nobody has taken a broader look at the benthic ecosystem by looking at a wider range of organisms — that’s what novel about this. It’s the first time anyone has done such a study quantitatively and tried to establish the responses of other organisms to forced environmental changes on the ocean floor,” Kennett said.

This investigation brings to light new evidence for the unaccounted effects of global climate change. Moffitt details possible short- and long-term responses the scientific community could have to the results of the study.

“In the short term, this research shows us that we should be evaluating what true climate commitments look like for environments and ecosystems that we care about. So what will the California current look like with less oxygen in the interior, with less oxygen for the organisms?”

Looking forward, Moffitt would like to see steps taken to lower the production of greenhouse gases.

“In the long term, this research shows that we need the reduction of global greenhouse gases and an international consensus around that issue.”