The Daily Nexus
Sign of the Times
Socialism for All
April 3, 2015 at 10:00 am by David Rubinstein 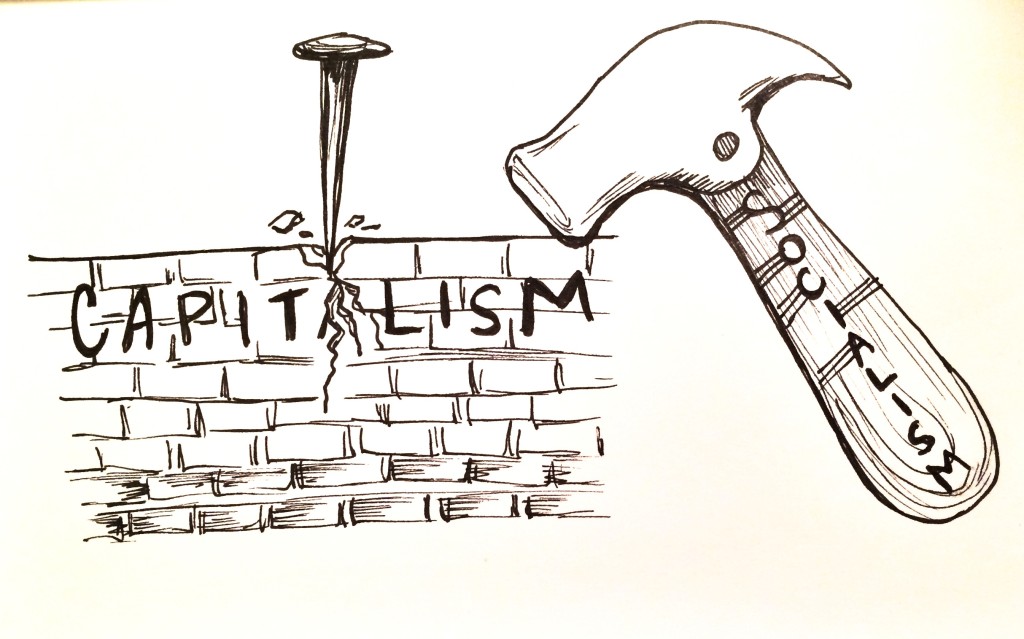 “AHHHHH he said the S word.” Yes I know; please don’t report me to the police — I promise I am not evil, but I’ll get to that later. It’s safe to assume that most college students feel discontent with the current political arena, so much so that we have almost given up on it all together. In fact, the 2014 elections had the lowest turnout in decades, a scarily unimpressive 36.4%. I worry that people get so dejected about how depressing things are that we never get to how things should be. But, if we must discuss how things are, let’s do that quickly to start off.

With the Department of Defense a pressing issue recently, let us start our examination there. The United States has set aside $813.9 billion for defense during the 2015 fiscal year. We can compare that to the $74 billion they have set aside for food stamps, and the combined state and federal $433 billion set aside for education. Running the vast prison system costs the taxpayers $48.5 billion a year, and we have more than 1.5 million people in jail at any time. Furthermore, black females are twice as likely to be imprisoned than their white counterparts (we won’t even get into the atrocities that transgender people, particularly trans women of color face in jail), and 3% of all black males will spend some time in jail during their lifetime, as opposed to .5% for white males. Private prisons (yes, those exist) account for 8% of all prisoners. Yet the most disturbing of all the prison statistics is that two-thirds of all prisoners released get rearrested within five years.

14.3 million people in America are either “food insecure” or “have low food security” and we have 45.3 million people living below the poverty line. Finally, let’s turn our attention to campaign spending in the 2014 elections: For the House of Representatives, Democrats raised 451 million while Republicans took in 586 million. The senate saw a little less spending, at 285 million for the Democrats and 315 million for the Republicans. This means that altogether (ignoring state and local races) Democrats and Republicans raised $1.637 billion dollars for just the 2014 elections.

With statistics that grim, and where government and media alike claim victory simply for not shutting down, it should shock no one that American enthusiasm in the political process is at record lows. Even though congress has a meager 14% approval rating, they have an 85% reelection rate. Why is that? This disconnect exists because we have been sold a false premise. We are made to believe that elections are between some mediocre partisan challenger and the incompetent yet name-brand familiar incumbent. Sure there’s always going to be one Elizabeth Warren, but as history shows, when you buy into a system that thrives upon utter stagnation and incompetence, it is hard to maintain that steam for very long. In fact, the current system itself is based on the fundamental assumption that the overwhelming majority of American people can be best represented by either a Democrat or a Republican. Muslims, Jews, Christians, atheists, agnostics, and Buddhists should all be either Democrats or Republicans. Bankers, coal miners, teachers, physicists, policemen and actresses, are all either red or blue. We claim America represents freedom, yet shouldn’t freedom manifest itself as a plethora of options?

If you want change — if you think the current political system is about as interesting as spending an entire life trying to determine spacing between sets of prime numbers (seriously people do that), then abandon the system.

Furthermore, it is accepted as hardline truth that capitalism rules the day, that capitalism is the economy of America and that America represents everything free and beautiful in the world, so therefore so does capitalism. A equals B.

Yet there lies an irony in the way an economic system that so loudly and forcefully claims to represent freedom (free markets, free trade, free choices) systematically suppresses any attempts at experimenting with and discussing other economic options. So we have two political parties and only one economic doctrine between them both. This is the reason why American politics are at a deadlock. Republicans get to accuse Democrats of being crazy communists and socialists (interchangeably of course) and Democrats, for some reason, accept the premise, take the bait and spend all their time trying to convince the world that they truly are capitalists, and it’s the Republicans that are crazy. This pushes any so called “radicals” to the fringe of the party where they can either risk losing their position, or beg for forgiveness, accept the lord and savior that is capitalism and crawl back the center.

HOWEVER! And this is a big however. This entire mess that we shamefully call politics is built upon that one premise: we must play by the rules, and choose between the limited options given to us.

If you want change — if you think the current political system is about as interesting as spending an entire life trying to determine spacing between sets of prime numbers (seriously people do that), then abandon the system.

And become a socialist.

I promise you socialism isn’t the scary thing you’ve been brainwashed into believing.

Where capitalism preaches it is us versus them, and you must win, socialism preaches that is just us. And that we therefore win by helping us.

It should come as no surprise to anyone that the most capitalist nation on earth is also the worlds leader in carbon emission. How can anyone actually act shocked that corporations place profit over the environment when they are almost encouraged to systematically place profit over humanity? When CEOs take in millions in salary and cut employees benefits, when the wealthy spend billions buying elections, yet claim they will have to fire everyone If we raise taxes, how can we possibly be surprised that corporations are not thinking about long term benefits for humanity. When Republicans praise businesses for being savvy for taking advantage of tax loopholes yet claim people who need government support to survive are horrible moochers, how can we expect them to represent the youth?

However, we must remember that cynicism and apathy are just as much a plague on America as is greed. In fact, the people in power rely upon that very cynicism and apathy of the youth. They know they can not stay in power if the youth give just half a damn. I get tired of well-meaning people telling me “sure, socialism is good in theory, but I just don’t think we’re ready for it.” This idea has always confused me. It is this strange notion that humanity is some entirely and completely separate entity from government, and that both are entirely separate from “us.” However, in reality, we are humanity, we are the government, so I refuse to accept that this is all we can be. I refuse to fall into hopeless cynicism and I refuse to accept the premise of this rigged game.

David Rubinstein wants people to think about that “social” in “socialism” and the “capital” in “capitalism.” What do we want to focus on?

Socialism isn’t “new.” Its old. Its failed everywhere its been tried. As Mrs. Thatcher said, its fine “until you run out of other people’s money.”

Oh yeah? Where has it been tried and failed? Cute quotes are not evidence.

Dude…Scandinavian countries are socialist. It’s workin’ for them.

Unlike capitalism, under which the top 0.1 percent NEVER run out of other people’s money.

One could argue we live in a socialist country already. About 50% of the US federal budget goes to Medicare and Social Security and this will grow significantly as the baby boomers hit full retirement age. The US military budget gets a lot of press but this only accounts for about 18% of the federal budget. And this figure also accounts for international security assistance. Another 11% of the budget goes toward programs that provide aid (other than health insurance or Social Security benefits) to individuals and families facing hardship. This works out to about 60% of the federal budget… Read more »