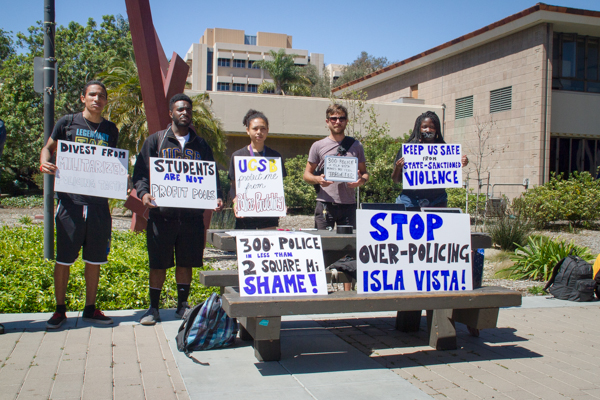 The UCSB Task Force Against Police Brutality and Black Student Union (BSU) held a silent demonstration at the Arbor on Wednesday to protest the Santa Barbara County Sheriff Department’s “Keep Isla Vista Safe” campaign as well as the increased number of police officers that will be in Isla Vista during Deltopia weekend.

The BSU developed the task force in January during BSU’s Week of Education and Action, and is comprised of various campus and community groups and organizations including BSU, the MultiCultural Center (MCC) Council, Copwatch and People Organized for the Defense & Equal Rights of SB Youth (PODER). The task force also released a list of demands on Wednesday, calling for “the demilitarization of police at major events such as Halloween and Deltopia.”

Anonymous members of the Task Force said in an email the protest and list of demands were aimed at resisting the increase of over-policing, militant practices and profit-based ticketing in I.V. and on campus.

“We came across the page ‘Keep Isla Vista Safe.’ This page proclaims to operate as a community effort to maintain order and safety throughout the streets of Isla Vista,”
the members said in an email. “Instead, this campaign boastingly intimidates students with memes regarding the increase of profitable restrictions and police presence.”

According to Task Force members, student demonstrations and demands have been presented to university administration in order to bring attention to the relationship between increased police presence and tension between students, I.V. residents and authority figures.

“When students see so many police officers swarming the streets of Isla Vista, walking around with their hands on their guns, it creates a hostile environment that makes students feel unsafe and defensive, as though they have already been profiled as criminals,” members said in an email. “This atmosphere is what produces unfortunate events like the riot that occurred during Deltopia last year.”

The Task Force’s demands call for “redirection of funds from tickets into restorative programs and educational safety courses” and insist “all law enforcement officers participate in a required cultural competency and diversity training,” aimed to educate officers “on the emotional, social and psychological effects of police presence experienced by students of color and other marginalized groups.”

Demonstrators in the Arbor wore black and placed duct tape over their mouths, asking passing students to sign a “stop over-policing” petition directed toward Chancellor Henry T. Yang. Members also called for students to participate in a photo project called “300+,” in which students wrote one descriptive word about their reaction to the planned presence of over 300 police officers in I.V. for Deltopia weekend.

“Students have expressed that Isla Vista policing makes them feel threatened, triggered, targeted, criminalized, nervous, unsafe, uncomfortable, and exploited,” the members said in an email. “We believe that the photos and expressions from the community highlight the general consensus from students and I.V. residents that large numbers of police do not make them feel protected or safe, but rather the opposite.”

According to first-year global studies major Ogui González Vilá, the increase of ordinances and restrictions during Deltopia weekend alienate students from police.

“I wish that there was just more collaboration between students and police in events like these,” Vilá said. “I know there are other alternatives to discourage people from attending Deltopia other than using police scare tactics.”

The Task Force on Police Brutality finally stated that their demands be “implemented within the next 3-6 months,” with Yang’s official response expected “no later than 5 p.m. on April 8th 2015.”

A version of this story appeared on page 3 the Thursday, April 2, 2015 print edition.