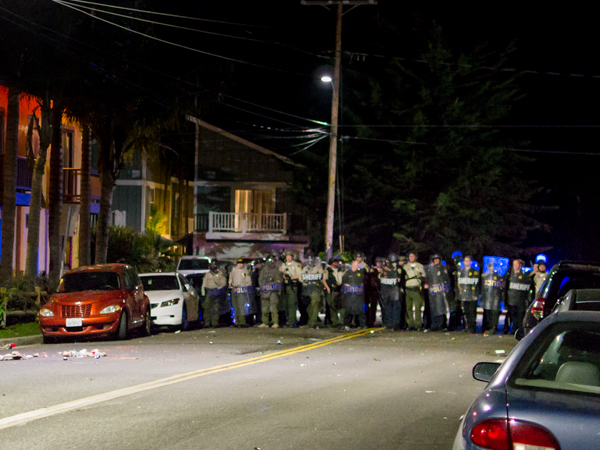 Last April, riots broke out in Isla Vista on Deltopia weekend after large crowds clashed with police, resulting in the use of tear gas and rubber bullets and the arrest of over 100 individuals primarily from outside I.V. According to a statement from Chancellor Henry T. Yang on March 20, over 300 police officers will be on duty in I.V. during Deltopia, including officers from the UCSB Police Department, I.V. Foot Patrol and other nearby stations.

Associated Students External Vice President of Local Affairs (EVPLA) Cameron Schunk said his office initiated UCIV in response to what he called an “over-policing” of Deltopia.

“The mantra has been, ‘If it’s out of control, we’ll just add more police officers,’ — that’s not good in I.V.,” Schunk said. “I’ll be the first to tell you that I think 300 police officers for Deltopia is too many.”

Schunk said the idea for UCIV came from a desire to include I.V. residents in existing efforts to regulate Deltopia.

“A lot of decisions about Deltopia locally get made out of the hands of residents,” Schunk said. “What I was looking at was how we best integrate ourselves to existing systems and create something that can grow over time as our community representation grows.”

I.V. Recreation and Park District board member Pegeen Soutar said students and I.V. residents will determine the outcome of Deltopia.

“You can do all the law enforcement and all the regulation you want, but the community itself decides,” Soutar said.

A noise ordinance will also be enforced over the weekend in which residents will be allowed to play music from 7 a.m. to 6 p.m. on Saturday so long as it cannot be heard from the street. Violations of the ordinance will incur fines of up to $500.

According to Schunk, UCIV has recruited student volunteers to assist I.V. residents and police by alerting students who violate the noise ordinance, helping shut down overly crowded parties, assisting intoxicated students and passing out water bottles in the street.

“What I see students doing is preventing police from writing these fines and helping students from getting fined,” Schunk said. “We’re hoping these [volunteers] will be able to provide some sort of structure to people who might otherwise be wandering the streets.”

According to EVPLA Community Safety Director Jake Gorham, the EVPLA office has praised fraternities for their participation in the initiative.

“A lot of fraternities have gone above and beyond,” Gorham said. “We only have three people in the volunteer group that aren’t fraternity members.”

Inter-Fraternity Council president Gregory Rousso said fraternities affiliated with IFC will assist UCIV by providing at least two volunteers to act as “liaisons” to prevent confrontations with the police.

“This will take the form of notifying houses to turn down their music, helping them shut down their overly crowded parties and other efforts to help out without the police having to give tickets and large fines,” Rousso said.

Rousso said he also informed the fraternity presidents to not host open parties and to not have events with loud music.

“At this point, it’s simply not worth it,” Rousso said. “We’re doing our best to have a positive impact in this year’s Deltopia and to keep it safe and local.”

According to Schunk, UCIV is not intended as a replacement for law enforcement efforts or to undermine police authority.

Gorham said while he hopes to see UCIV become a permanent A.S. program, its future depends on the program’s effectiveness during Deltopia.

“It’s nothing we’ve ever done before, so I really don’t know what will happen,” Gorham said. “We’re hoping, if it’s successful, to turn it into a program that happens more frequently, on the average night in I.V.”

Schunk said he advises students and I.V. residents not to invite friends to I.V. this weekend.

“For one year, ask your friends to come up any other weekend,” Schunk said. “In order to really take control of something like Deltopia, it’s going to take a whole lot of stewardship and sacrifice on behalf of I.V. residents.”

A version of this story appeared on page 5 the Thursday, April 2, 2015 print edition.