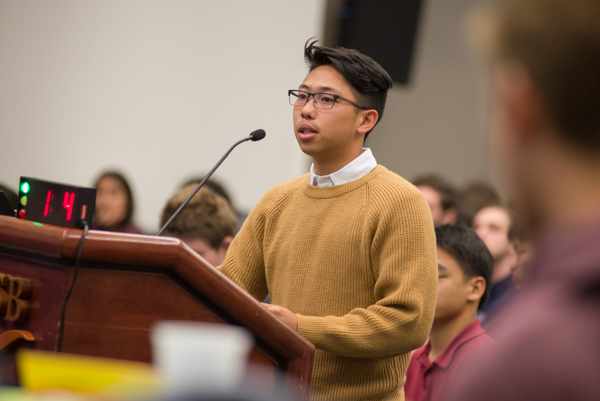 At the first Spring Quarter meeting, A.S. senators failed to finish their discussion on UC financial divestment, so External Affairs Board will continue today at 6 p.m. in the UCen. Lorenzo Basilio/Daily Nexus

The Associated Students Senate met Wednesday night in Corwin Pavilion where it discussed bills calling for University of California (UC) divestment from companies allegedly committing human rights violations in the West Bank and Gaza as well as a resolution condemning anti-Semitism.

The senators discussed University divestment from businesses allegedly profiting from human rights abuses in contested lands in Israel and Palestine. Seven UC campus Senates except for UCSB, UC Merced and UC San Francisco student senates have passed resolutions calling for financial divestment from such businesses and a similar resolution failed to pass at the university last year. The resolution sparked debate between students Wednesday about Israeli-Palestine relations as dozens of students gave their opinions on the resolution and experiences with anti-Semitism. A.S. External Vice President of Local Affairs (EVPLA) Cameron Schunk updated the Senate on developments with Isla Vista self-governance progress and A.S. Program Board commissioner Ben Simons urged students to attend university-sponsored events during Deltopia this weekend.

Member of the UCSB chapter of Students for Justice in Palestine (SJP) Anumita Kaur sponsored a bill that would voice the Senate’s support to stop UC investments and contracts with businesses allegedly profiting from human rights abuses in conflict areas in Israel and Palestine and said students’ tuition is funding to these corporations.

First-year physics major and SJP member Shahryar Mooraj spoke to the Senate about injustices committed against the Palestinian people.

“The fact is that Palestinians living in Gaza, in lands disputed with Israel, live in an apartheid state,” Mooraj said. “On a daily basis they are subjected to Israeli policies such as segregated bus lines, the continuation of illegal settlement building, home demolitions [and] housing discrimination.” 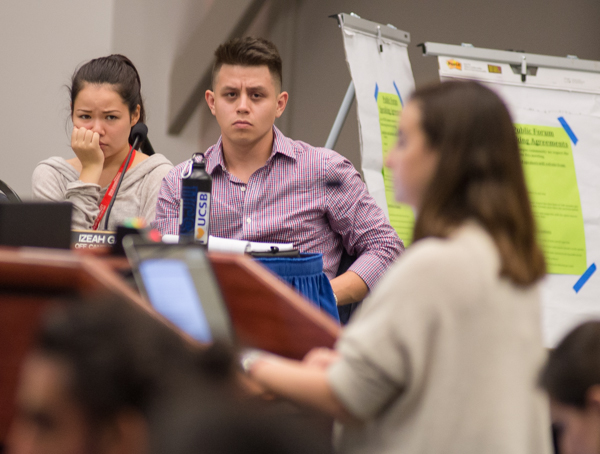 Third-year economics and psychology double major Guy Singer spoke out against the resolution and said the bill’s proposal coincided with the anniversary of the introduction of anti-Semitic laws in Germany.

“On April 1, 1933, exactly 82 years ago today, the newly empowered Nazi regime carried out their first nationwide plan to actually targeting Jewish businesses and professionals,” Singer said. “Perhaps if the resolution’s proponents had actually consulted with Jewish students when writing this resolution, I know I would have been happy to, they would have refrained from bringing up on a day that might be viewed as problematic.”

The resolution to divest from businesses allegedly profiting from conflict in the West Bank and Gaza will be discussed further today at 6 p.m. in the MultiCultural Center Theatre by the A.S. External Affairs Committee.

Senator Michelle Moreh then introduced a resolution condemning anti-Semitism and said she introduced the resolution “to raise awareness about the outgrowth of hatred of Jews around the world.”

“We still have swastikas being spray-painted on Jewish fraternities at other UC schools, we still have students denying the right to exist of the only Jewish state in the world and we still have a candidate for UCLA’s judicial board being discriminated against on the basis of her Jewish identity,” Moreh said. “We still have flyers posted around UCSB blaming the Jews for 9/11.”

UCSB Muslim Students Association (MSA) President and fourth-year biochemistry major Yasmin Sallak said she supports the bill and noted there is a distinction between anti-Semitism and criticism of the Israeli government.

“I want to do my part to make sure that Jewish students feel safe expressing their identity,” Sallak said. “When speaking about Israel I’d like to point out, just as the resolution does, that there is a significant difference between criticizing the being of Israel and critiquing Israeli policy.”

The resolution to condemn anti-Semitism passed with a vote of 23-0 with one abstention from second-year economics and accounting major and Senator Steven Kwok.

Simons outlined all of the on-campus events Program Board has scheduled to minimize the amount of students in Isla Vista during Deltopia weekend and said students should attend the events to encourage administrators to support similar alternative programming in the future.

“This needs to be a success in order for us to continue doing stuff like this,” Simons said. “There is no way the university will allow us to create events like this if this one is not successful.”

Schunk said the University of California Isla Vista (UCIV) volunteer program will help facilitate Deltopia and the lawful conduction of festivities this weekend.

“These students are acting as an independent body,” Schunk said. “This year, UCSB is taking ownership over I.V. and what happens in it.”

The program currently consists of around 50 students and three Greek organizations. UCIV is still accepting volunteers, who will receive free shirts and food if they participate, and will be holding an orientation Saturday morning.

“UCIV is a volunteer program,” Schunk said. “Every volunteer will have a backpack with water bottles, maps with all the locations and know where the water stations and resources are.”

According to Schunk, the problems surrounding Deltopia partially stem from distrust between law enforcement and students.

“The status quo is there is a lack of trust in student responsibility,” Schunk said. “We are hoping for a better bank of student-police interactions.”

Schunk said more planning and precautions were taken this year as a result of Deltopia last spring, and next week plans will be made for the 2016 Deltopia based off the weekend event.

“There was a lack of momentum last year,” Schunk said. “Everyone stepped back and said, ‘Wow that’s terrible that happened, we should never let that happen again’ but the conversation ended there. In addition, the week following will be a week of action and discussion. So what this week will focus on is discussion forums for solutions about problems we face this year and what to fix … or what went right and what we should expand upon.”

Schunk then moved on to discuss the progress of I.V. self-governance bill AB 3 and said the preliminary report for financing the bill is set to be completed by the end of May and the full report to be finished by July.

“We are getting financial feasibility,” Schunk said. “It will answer the question, ‘Do we have the money to move forward with self-governance?’ … It’s really good to see the community working together to provide benefit and support.”

Senate ended with brief updates on the upcoming installation of vending machines on campus and the progression of redesigning student ACCESS cards.

A version of this story appeared on page 6 the Thursday, April 2, 2015 print edition.

[Correction: This article incorrectly reported the location of today’s AS External Affairs Committee meeting as the Goleta Valley room of the UCen. The meeting will actually take place in the MCC Theater. The article has been updated accordingly.]

This Mooraj guy is an ignoramus. Every country on Earth agrees that Gaza is not part of Israel, and there are no “Israeli policies” there, let alone segregated bus lines or house demolitions. The reason why there is anti-Semitism at UC campuses is because the student government rolls out the red carpet to BDS: a group that cloaks itself in the language of human rights to spread hatred of Jews and the Jewish state. The reason why they exist is to convince people that the Palestinian goal of annihilating Israel and murdering every non-Muslim who lives inside it is the… Read more »

Trying to demonize, delegitimize and apply double standards against a pluralistic, tolerant and democratic state such as Israel, by siding with genocidal groups such as Hamas, Hezbollah and Iran, has nothing to do with human rights.

It is just raw, undisguised anti-Semitism.

b
Reply to  Arafat

The only time I ever feel anti-Semitic is every time you talk.

Arafat
Reply to  b

b
Reply to  Arafat

I don’t think there’s any debate about the well-known fact that you’re annoying and racist.

The BDS movement represents malevolent fascism that has no problem with dictatorships and autocrats but seeks instead to target the only democratic, free country in the Mideast, Israel.

BDS is an anti-Semitic, racist movement, plain and simple.

There are 49 Muslim majority countries in the world that identify themselves as Muslim and where Islam is considered the official religion of the state. But the BDS movement doesn’t seem to have a problem with that.

They have a problem with only one nation, the Jewish one, which they wish to be supplanted with yet another dysfunctional Muslim state.

“In other news, _____ Chapter of Students for Justice in Tibet have insisted that the university cease doing business with any Chinese company.” –

Imaginary news report that would never occur because the bigots who attack Israel don’t actually care about “occupation,” they want to destroy the Jewish State.