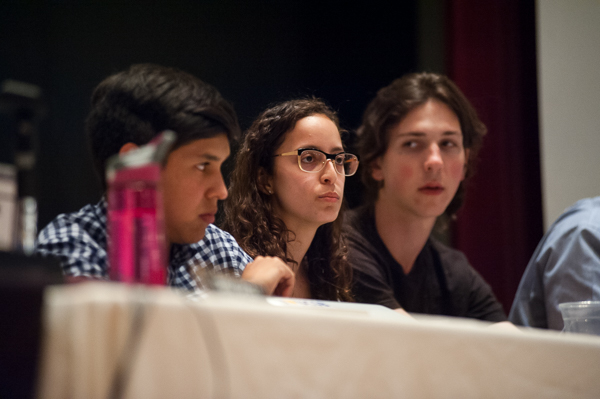 The Associated Students Senate External Affairs Committee tabled a resolution to urge divestment from companies profiting from human rights violations in “Palestine/Israel” for one week at a meeting of the committee in the Multicultural Center Theatre Thursday night.

The decision was reached after a public comment period dominated most of the meeting in anticipation of the Jewish holiday Passover, which begins tomorrow and lasts through April 11. The committee will revisit the resolution at its next meeting next Thursday.

The controversial resolution calls on the university, ASUCSB, the UCSB Foundation and UC Regents to divest from companies selling equipment to the Israeli government for use in “Israel’s military occupation and siege of the Palestinian territories.” The resolution specifically names Hewlett-Packard, Raytheon, Motorola, Caterpillar and General Electric as companies that should have profited due to their sale of various pieces of equipment to the Israeli government including biometric scanners, engines for Apache helicopters and various guided missiles.

The resolution cites the UC’s historic disinvestment from South Africa over its apartheid policies as precedent for continued divestment from companies doing business with Israel.

“ASUCSB will examine its assets and UC assets for investments in companies that a) provide military support for, or weaponry to support, the occupation of the Palestinian Territories, or b) facilitate the building or maintenance of the Separation Wall or the demolition of Palestinian homes, or c) facilitate in the building, maintenance, or economic development of Israeli settlements on annexed Palestinian territories,” the resolution states.

Second-year sociology major, Students for Justice in Palestine member and co-author of the divestment resolution Anumita Kaur read the language of the resolution calling for the university to take action.

Kaur also said it is distressing for students to know that their funds are being invested in companies engaged in military activities in the Israeli-Palestinian conflict.

Second-year biopsychology major Niki Elyasi said the divestment resolution would do nothing to address the flaws in Israeli state policy.

Kaur summarized her perspective of the goal of the divestment movement toward the end of her presentation and said, “We are just trying to wash the blood off our hands.”

A.S. Senator and third-year student Michelle Moreh spoke in favor of some of the more controversial aspects of Israeli policy addressed in the resolution, such as the military blockade of the Gaza Strip, which has been in effect since 2007.

“The reason there is an imposed blockade is because terrorists smuggle weapons into Gaza before that have been used directly to attack Israeli citizens, Moreh said. “If Israel does not restrain to a certain level what goes into Gaza, its citizens are in critical danger.”

Third-year psychology and economics double major Guy Singer said he is opposed to the passage of the divestment resolution because it does not include any input from the Jewish community.

“I want the Jewish community to be involved in some way, and they have not been. In fact, having to take this on this week has been a complete surprise to all of us,” Singer said. “What I’m here to suggest is we vote this bill down, we form an ad hoc committee of certain representatives from certain communities to put forward a bill that addresses the various needs of the communities.”

Second-year physics major Senator Liam Stanton said he was in favor of tabling the bill for next week and anticipated it will be voted on eventually by the full Senate.

“Either tabling it here or tabling it in big Senate, sending it there and then tabling it, is the appropriate thing to do, regardless of which side of the resolution you go on,” Stanton said. “I think of course it will get to big Senate.”

After further debate and discussion a proposal was made to table the motion for one week, with five of the six senators voting in favor and one opposed vote from Moreh, the motion passed.

Best of luck to UC Santa Barbra students for their efforts to divest from violators of human rights. We tried to do the same on the University of Michigan Ann Arbor campus last week. 15 votes in our favor, 25 against us. Next year we will do better. Good luck to you on this upcoming vote. Humanity and life-on-earth is with you.