The Daily Nexus
News
Former CIA Director, Secretary of Defense Speaks on US Policy
March 30, 2015 at 1:57 am by Peter Mounteer 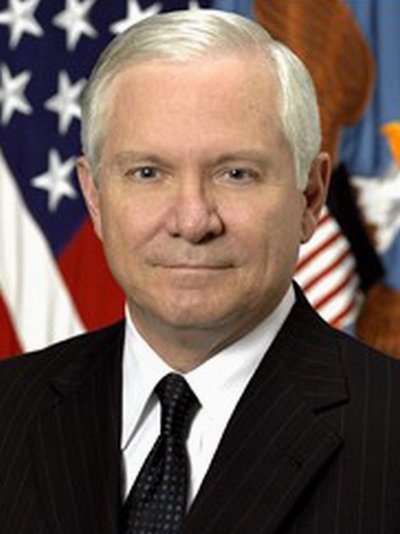 Former director of the Central Intelligence Agency and 22nd Secretary of Defense of the United States Robert Gates gave a lecture at the Granada Theatre last week on the U.S.’s current position in world affairs.

Drawing on material from his book, Duty: Memoirs of a Secretary at War, which was released last year, Gates discussed his views on how the U.S. should deal with Iran, China, the ongoing civil wars in Syria and Ukraine, cybersecurity threats and the presence of the Islamic State of Iraq and the Levant (ISIL), as well as his take on the current political climate in Washington D.C. Gates concluded his talk by taking pre-screened questions submitted by students in the global studies department.

Gates served as CIA director from 1991 to 1993 and U.S. defense secretary from 2006 to 2011, the height of the Iraq war. During his tenure, he oversaw the U.S. occupation and eventual withdrawal of large numbers of troops from Iraq and also presided over the continuation of the war in Afghanistan. He is currently the Chancellor of the College of William and Mary in Virginia.

During his lecture, Gates said the Obama administration’s stance toward foreign policy action regarding Iraq and ISIL has been insufficient in relaying appropriate messages abroad.

“Obama’s constant invocation of focusing on coming home and nation-building at home, his willingness to make substantial cuts to the defense and intelligence budgets, cuts made worse by the Congress and his unwillingness to enforce his own red lines don’t inspire much confidence in our friends, nor trepidation in our enemies,” Gates said.

Gates said he identified four “seismic shifts” in the Middle East, pointing out conflicts playing out simultaneously that affirm his belief the Middle East would remain a “cauldron” of violence and turbulence for the foreseeable future.

“In Syria, whatever odds there were in shaping a potentially decent outcome early on, maybe during the first six months of the civil war, are now long gone,” Gates said. “There is a significant gap between the president’s stated goals with respect to ISIS and his limitation on the American military role. I think his goal, to destroy ISIS, is unattainable, especially without American special forces.”

Last month, President Barack Obama issued an authorization for the use of military force request for approval by Congress that would allow the U.S. to engage in non-ground combat operations against the Islamic state for up to three years, subject to renewal.

Gates said he would prefer U.S. foreign policy mandate the undercutting of ISIL in Iraq in order to protect the West, primarily American “friends in Europe.”

“A more realistic if less wringing mission would have been to call for degrading ISIS and pushing it out of Iraq, denying these fanatics a long-term base,” Gates said.

On the topic of cyberterrorism, Gates said the main advantage to cyberterror is that it allows smaller, non-state entities to conduct more impactful terror operations than had been previously possible. Gates broke down the “cyber threat” along three lines: the collection of electronic intelligence on other governments for national security purposes, the same practice for economic advantages in the global economy and the denial of services to allow the destruction of infrastructure.

“Those wishing to cause us harm no longer need an industrial complex to martial deadly force,” Gates said. “Advanced weapons systems like a carrier fighter group required tens of billions of dollars of research and development, production and a significant technological base. Cyber capabilities have low barriers to entry.”

Gates also said while most nations do not engage in military or cyber-attacks against the U.S. due to risks regarding military retaliation, terrorist groups “have no such hesitation.” Because of this, Gates said, the U.S. should work with private sector firms “aggressively” to reduce threats from cyberterror, but not strive for a full-proof system that would entail “unacceptable” costs.

Gates then discussed Russia’s place in world affairs and its relationship with the U.S., which he placed in the context of the current international climate, comparable to pre-World War I era.

“The world we face more than 20 years after the end of the cold war more closely resembles the world before World War I,” Gates said. “Age old great power, nationalist, separatist, religious and ethnic conflicts have returned with a vengeance … there is no more salient or serious example of this than Vladimir Putin’s Russia.”

On Putin, Gates said Putin “violated the post-war principle” that borders between nations can only be changed on mutual agreement, with the Russian seizure of Crimea from Ukraine in early 2014.

“Putin’s seizure of Crimea … sends a strong message to other countries, including China, that they similarly can settle old disputes with their neighbors militarily,” Gates said. “All of this sets dangerous precedents threatening future crises and conflict around the globe.”

Despite this, Gates said he does not consider Russia a rising power because of a small economy and a population “in free fall.”

“Nuclear-armed and able to play the spoiler on any number of issues, Russia is still not a global rival in the making,” Gates said.

Gates then discussed China, stating while the Chinese have been investing heavily in defense, a global arms race with the United States is not on the Chinese agenda because “frankly, they’re a lot smarter than that.”

“They’ve invested heavily in cyber, anti-satellite capabilities and in highly accurate anti-ship cruise and ballistic missiles to hold our aircraft carriers at risk,” Gates said. “I do believe they seek naval superiority in East and South-East Asia, regional dominance.”

Gates closed his speech with a discussion on Washington and the problems he believes policymakers, primarily members of Congress, create with respect to national security.

“When it came to the defense budget I was continuously outraged by the parochial self-interest of all but a very few members of Congress,” Gates said. “Any defense facility or contract in their state, no matter how superfluous or wasteful, was sacrosanct.”

Gates said due to congressional redistricting processes carried out by politicians and an inability to pursue policies across multiple presidential administrations are the primary reasons for stagnation in Congress.

Prior to taking pre-screened questions from the audience, Gates closed his talk by stating his hope that the “remaining adults” in both political parties would be able to address the country’s numerous problems, which he listed as the national debt, immigration, tax reform and underperforming public schools, among other issues.

“Even though the United States faces enormous obstacles, most of them are self-inflicted,” Gates said. “So we have the power and means to overcome them, just as America has done in the past.”

I attended the lecture, have read the book and am in a book group that will soon be discussing the book. The review is well done and will be helpful.

Can you tell me if the talk will at some point be available to be seen as a video? Perhaps it will be included in the UCTV site.

I greatly appreciate your assistance with this inquiry.