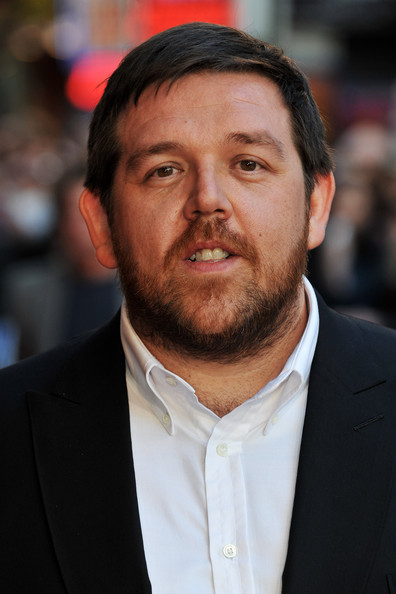 If you’ve been asked who Nick Frost is, chances are you’ve shook your head in confusion before being told, “You know, the fat guy from ‘Shaun of the Dead’ and ‘Hot Fuzz?’” Suddenly, your eyes light up as you realize who people are talking about. Well, shame on you then, you naughty person. Because there is much more to Mr. Frost than those films. There’s also more to him than his girth, although it did make him the perfect choice to play Santa Claus. I digress.

For the inferior specimens who have yet to embrace English culture, Nicholas Frost is an actor and comedian, known mostly for his collaborations with friends Simon Pegg and Edgar Wright. The three worked on “Spaced,” the surreal sitcom that helped bring Frost into the limelight. Their other major achievement is the comedic “Three-Flavours Cornetto Trilogy,” which includes “Shaun of the Dead,” “Hot Fuzz” and “The World’s End.” Frost considers his part as the bumbling policeman Danny Butterman in “Fuzz” to have been his most fun role.

In recent years, Frost has become a father. Due to the nature of his job, he’s able to take his son with him wherever he films, much to his delight. Currently, he’s working on a writing a memoir and performing in the sequel to “Snow White and the Huntsman.” His newest film, “Unfinished Business,” starring Vince Vaughn, Dave Franco and fellow Brit Tom Wilkinson was just recently released.

Last week, Frost hosted a conference call with several other reporters across the country. Here’s what he had to say to the Daily Nexus.

Alex Wehrung: Considering the surrealism of “Spaced,” the parody-like nature of the “Cornetto” trilogy, and the little more straightforward nature of “Unfinished Business,” what form of comedy are you most accustomed or comfortable being in?

Nick Frost: Um, you know, I’ve never considered that there’s a change of comedy. For me, if it’s funny, it’s funny. And that could be at a sitcom or at a funeral. Comedy is comedy. The bottom line is that laugh and how you get there. There are many, many different ways [to get that laugh].

I was never a fan of slapstick as a child. I understand that it’s a very beautiful, difficult thing to do well, but I never quite got it. There was a comedian over here called Frank Spencer [played by Michael Crawford] who had a really massive show called “Some Mothers Do ‘Ave ‘Em.” And I could never watch that much as a child, because I would get rather angry watching it.

AW: How was it working on “Doctor Who,” with Peter Capaldi, Jenna Coleman, Steven Moffat, and have you always been a fan of “Doctor Who?”

NF: I have always been a fan of “Doctor Who.” It was fantastic working with those guys. I didn’t see Steven, but he’s not there every day, so I hung out with Peter the most. He’s such a gentleman, and who knew, but he’s a real giggler on-set.

I worked out what his little funny bone was, and then it was really easy just to keep making him laugh all the time. Which was great, because there were a few scenes where we just couldn’t get through it, and we had to end up shooting bits kind of separately because we were laughing so much.

But you know too, my first time on the “TARDIS,” I saw the TARDIS, the set for the TARDIS, for two and a half weeks, and I made a point of not going on until my scenes were shot on it. And then I had the pleasure of Peter showing me around the “TARDIS,” which made my little 8-year old fanboy-willy go all funny.

AW: It was a dream come true, huh?

AW: How exactly did you end up working on “Unfinished Business?”

NF: Well, it was one of those very flattering phone calls you get as an actor. [It happens] when you’re kind of conferencing with Ken Scott and the producer, Todd Black, and they spend five minutes saying they really like you.

So that’s how it started, and I got Steven Conrad’s script, and it just felt right. I’ve been a fan of his work for a long time, and I just couldn’t turn that opportunity down.

“Unfinished Business” is in theaters now. While the movie may not be doing so hot amongst critics, Alex Wehrung still thinks Nick Frost is one cool dude.