The Daily Nexus
Spoken Word and Poetry
MCC’s An Evening of Self Expression Encourages Poetic Catharsis
March 10, 2015 at 6:40 pm by Janel Mendoza 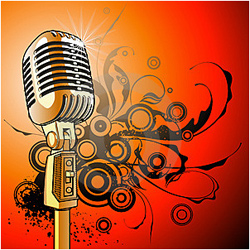 It’s not recommended to eat sweets before bed but for last Thursday’s open-mic, an exception could surely be made. Turning its seating area into a poetic foreground with the smell of red velvet cupcakes and vanilla lattes, the cozy ambience of dim lights and the sound of DJ Tempest’s tunes, Crushcakes & Cafe was the place to be as the UCSB MultiCultural Center hosted “An Evening of Self Expression.”

Master of Ceremonies Yosimar Reyes traveled from San Jose to Santa Barbara to host the intimate gathering. With slicked back hair and Jordan Spizikes, the artist stepped toward the mic and introduced himself as “a little poet … who usually writes about immigrants and little queers because they’re interesting and dramatic.”

The sign-in notepad got passed around while Reyes complained that only three people volunteered. He was right to call it “hella tragic,” and mentioned that he’d be forced to make the audience talk. He admitted that he was “oppressive like that.”

Stepping up, Karen Ortega claimed to be a “virgin to poetry” but, nevertheless, read her piece “My Mother.” For all the momma’s boys and girls, this one was a heart-squeezer. Ortega described her mom as a dreamer, lover and inspirer and reminded everyone to never take their mom for granted.

In between sign-ups, Reyes performed original pieces from his newly released book, For Colored Boys Who Speak Softly. His readings included “Mi Amigo” and “Dirty.”

Before his first poem, he admitted he “[likes] writing about love even though [he doesn’t] believe in it sometimes.” The poem was about a significant other who Reyes described as “super cute, super down, [and] super brown.” Even though this super dude left Reyes for one of his close friends, the poet used the tragic event to his advantage. “[An event like] that only gives you material,” Reyes said.

On the other hand, “Dirty” was about experiences he shared with his mom. Characterizing her as meticulous and cleanly, the artist narrated how intently she bathed her sons. He ended the piece powerfully. “Mommy, who was left alone to raise two brown boys dark as dirt, made sure that the rest of the world would never have an excuse to call [them] dirty,” he voiced.

Spoken word admirers and Goleta residents Kathleen Baggarley and Keith Mar have attended more than one of UCSB’s Spoken Word events. Known for their love of poetry, this time the couple brought their own poems to share.

In remembrance of her sister, Baggarley performed “Sherry.” At the age of 10, life was supposed to be about roller skates and climbing trees. But, on Christmas night of that year, adolescent Baggarley lost her 15 year-old sister in an accident. Now that the grieving has passed, she recognizes that Christmas “has also become a time to celebrate the living.”

Mar inspired the audience with “The Poem Inside You,” dedicated to his wife. He thanked her for helping him find the poem inside himself. He called to the people who fail to accept themselves. “Here’s to all the kids of color adopted by white parents who tell them ‘In this household, we don’t see color’ but who wonder [then, if their] parents really see [them]?” Mar questioned.

Thanking Baggarley and Mar for their courage, emcee Reyes recognized every audience member as writers, “even if [they’re] just writing essays and [stuff].”

Two performers went up next.

Emi Wong, representing Chi Delta Theta, performed a poem she discovered on the Internet. Having recently overcome an eating disorder, Wong addressed Kate Moss’ controversial quote, “Nothing tastes as good as skinny feels.” With a soft voice but passion-filled tone, Wong listed all of the tasty morsels we love to snack on during the winter — freshly baked cookies and steaming hot cocoa. The poem read, “You can take your skinny, your bones, your hunger. I’ll take life.”

Carlos Ortega performed “Why Me?” while he touched on past experiences with guns, drugs and violence. By the end of his poem, he had revealed a lot, extreme bits and all. “You’re gonna get to know me today,” he said. And get to know Ortega we did.

In an interview with the Daily Nexus, MCC Director Zaveeni Khan-Marcus said her favorite part of the night was the emcee. “[Reyes talked] about his life and his immigrant experiences and they resonated with [her].” Her instant connection was significant and note-worthy.

Khan-Marcus also encouraged UCSB students to attend the next quarterly open-mic. “The MCC is about representation” and, for the voices that are not heard, she stated that open-mics are a safe setting to self-reflect and self-express.

Reyes concluded the conversation with some advice. In a one-on-one conversation, the up-and-coming poet encouraged amateur poets. “Once you realize everybody’s a hot mess, everybody’s going through something, everybody has trauma, that’s when you let go of the fear and open up the wound to allow people to identify with that,” Reyes said.