The Daily Nexus
Volleyball
Men’s Volleyball Back in the Win Column After Cruising Past CSUN
March 7, 2015 at 12:15 am by Edward Moss 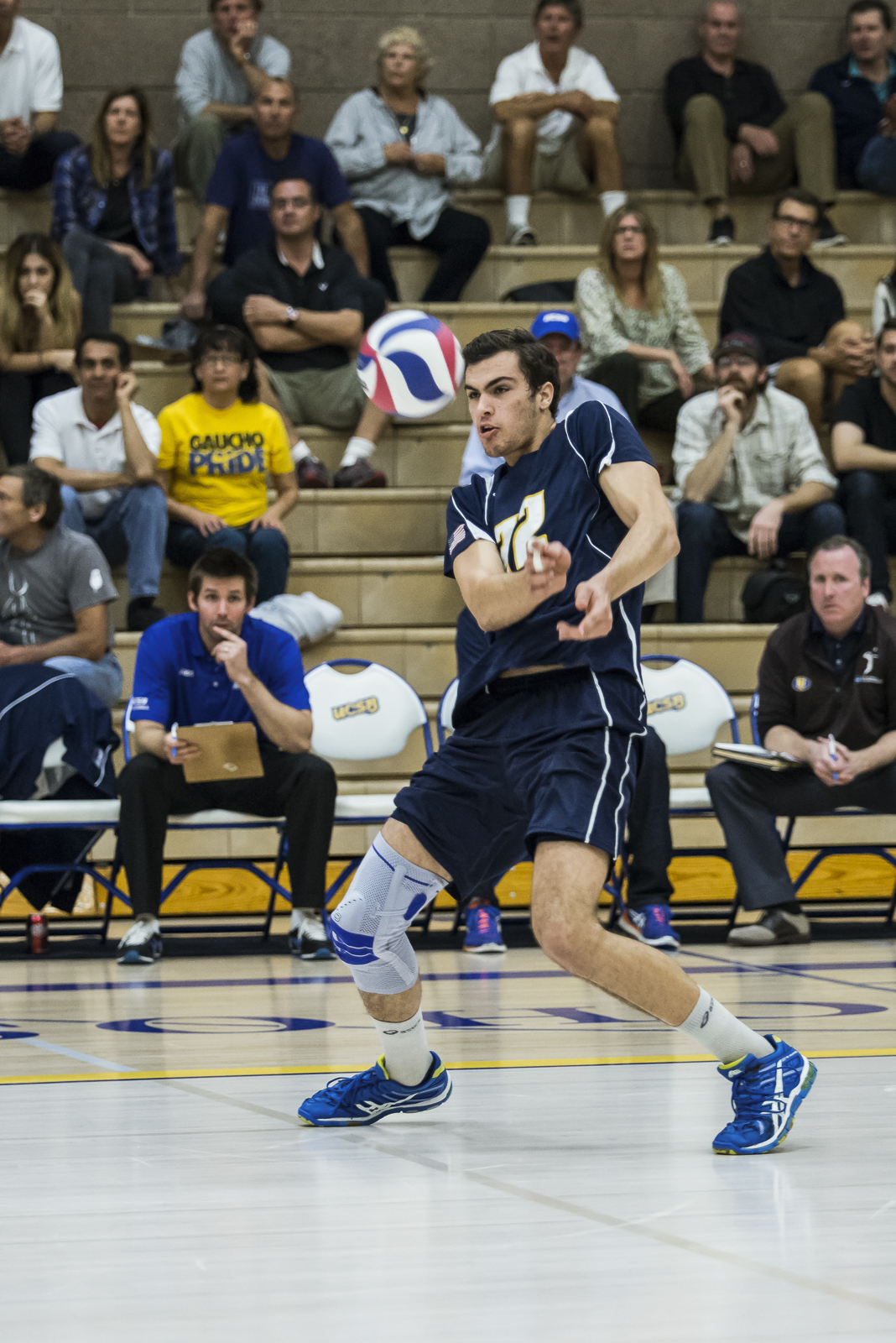 Sometimes the final score doesn’t reflect how a team played, and sometimes that’s a good thing. Amongst errors and lackadaisical play, the No. 8 UCSB men’s volleyball team defeated No. 14 CSU Northridge 25-18, 25-20, 25-16 last night in a match the Gauchos won’t be proud of, but one they were very happy to win especially after a devastating loss on Wednesday night.

“Nothing was clicking last game. Everyone pretty much had their worst game of the year, all at the same time,” redshirt senior outside hitter Weston Nielson said. “After playing our worst game of the season we knew we had nothing to lose so we had confidence and there was an atmosphere here tonight. I think we just came out and played a bit better tonight.”

After losing to No. 10 Long Beach State on Wednesday night, UCSB knew that if it wanted any chance to move up in the MPSF standing before the end of the season they would have to start beating the teams ranked below them.

Junior setter Jonah Seif stepped up as a leader with his all-around play to lead the Gauchos on the court. The All-American setter and third-year starter was all over the court tracking down passes and dishing out clean sets to his expectant hitters. In total he had 27 assists and he took matters into his own hands when his hitters went into a cold spell with four kills of his own as well as two service aces. He even added nine digs in an exceptional all-around performance that the Gauchos dearly needed.

“Honestly we didn’t know what to expect, how the guys would react and tonight was a good way to get out of that,” Assistant Coach Cullen Irons said. “It was an ugly win but it was still a win. We’ll always take that over an ugly loss. Jonah got the job done and that’s what we needed out of him. We’re happy about that.”

The three-set victory moved the Gauchos record to 12-7, 8-7 in conference play. For CSUN, the loss brings its record to 5-12 overall, 3-10 in conference play. UCSB is now back with a winning record in league play as it hopes to move up in the standings with seven league matches to go before the MPSF tournament.

The Gauchos passing improved tremendously from Wednesday’s match, mostly due to freshman libero Hayden Boehle’s strong play. Boehle seemed to be everywhere on the court as he led the team with 13 digs and received 21 serves without an error helping the Gauchos to a 63 percent sideout percentage in the match.

“[Boehle] played great tonight. There were so many times when you turn around expecting to not have a chance and instead you have a complete chance to score a point because he made a great play,” Nielson said. “I’m just really proud of the way he played tonight and he stepped up big time especially after how we played the last game.”

Nielson led the team with 11 kills and redshirt senior opposite Kevin Donahue was close behind with 10 of his own on a night where the Gauchos only hit .156 as a team. Redshirt junior outside hitter Spencer Buckley, replacing redshirt sophomore outside hitter Jacob Delson who was out with concussion-like symptoms, added four kills and nine digs in the winning effort.

The Gauchos have a week to get their game back to its full caliber with their next match against No. 9 UCLA on Friday at Rob Gym.