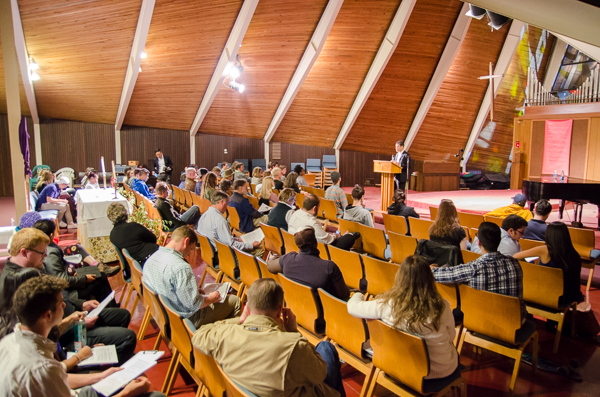 The office of Santa Barbara Assemblyman Das Williams held the third Isla Vista self-governance town hall of the year to determine the governance structure of a potential community services district (CSD) in I.V., which would potentially levy taxes in order to provide local services and infrastructure to I.V. residents.

Williams introduced Assembly Bill 3 (AB 3) to the state legislature in December and has since hosted over 25 meetings in Isla Vista to shape the content of his bill, which aims to establish I.V as a CSD by act of the legislature. A CSD is a form of local self-government, in which a given area can levy taxes to pay for certain municipal services through a locally elected board. The primary questions facing the group included the size and makeup of the governance board, how it would be formed and how members would be elected. Attendees split up into small groups and debated the finer points of these and other aspects of a governing board for the I.V. CSD.

Options for governance board selection included discussions on whether or not the CSD governing board would be composed of at-large members, representatives elected by the entire district to represent the entire district, or district members representing certain geographic portions of the CSD and elected by residents of those portions. Other contentious issues involved the ratio of elected-to-appointed members of the board, with significant disagreements regarding the ratio of appointed or elected board members, as well as the boundaries of the would-be CSD.

Williams began the meeting with a brief introduction on the goals of AB 3 and the public meetings occurring to flesh out the specifics of the bill language. The bill as it stands, according to Williams in a prior interview, should include language that provides powers for a CSD to contract for additional public safety services such as community service officers; a rental housing mediation task force; a municipal advisory council, which would allow the CSD to advise the county on additional policy for I.V.; and an area planning commission. The bill has until mid-March before it enters legislative committees in Sacramento, at which point it can still be modified.

Groups primarily disagreed on the makeup of the board by numbers, with boards as large as 11 members and as small as five proposed by several of the working groups. A group led by Associated Students Senators third-year anthropology major Carlos Lopez and second-year physics major Liam Stanton proposed a six member governing board with three ex officio non-voting members, possibly representing Santa Barbara City College, the university and the I.V. Property Owners Association, a majority of which would be elected by a margin of at least two members.

“As far as the composition of the board goes, we felt that having the majority of the board be elected was absolutely essential to democratic ideals,” Stanton said. “There should be two more elected members than appointed members at least.”

Stanton also said SBCC should be ex-officio but not voting because the college does not generate tax revenue for the would-be CSD. Lopez said the CSD board should be apportioned into voting districts with elected members ideally coming from different stakeholder groups in I.V.

Fourth-year psychology major and Open People’s Party chair Andre Theus said his group proposed a seven member board of four elected and three appointed representatives and favored an at-large basis for board representation and district boundaries including portions of West Campus and family housing.

“We don’t think there should be people elected from certain districts, whatever the geographical terms would be,” Theus said. “There’s a lot of talk only including the box or square of Isla Vista; I personally thought we should include … the housing of those students, West Campus and faculty, because a major portion of students in the next 3-5 years will be living and centered near Santa Catalina.”

“My problem is that UCSB has never cared about I.V.,” Rodriguez said. “They just bought up property so they can collect taxes in Isla Vista.”

Sasha Bates, a first-year history major and OPP candidate for off-campus senator, said although OPP does not take a stance on the CSD as a whole, he does believe the university should be part of the conversation.

“I thinks it’s completely absurd to say UCSB doesn’t care about Isla Vista,” Bates said. “Isla Vista gets its heart and soul from the student population.”

Bates said if I.V. does become a CSD, it should include the university as a stakeholder.

“I think UCSB should have some role,” Bates said. “UCSB is an integral part of the Isla Vista community, be it faculty or students.”

Lopez said he is personally in favor of involving the university in the CSD. According to him, incorporating the campus would help the CSD financially.

“A lot of the talks we’ve been having have UCSB being included in our CSD, and that would be a big income,” Lopez said. “In the last few years they have definitely picked up on the amount they are interested in helping the community.”

But Rodriguez said the university’s tendency to continue “pushing students off campus” has only lead to a housing crisis for I.V. residents.

“UCSB and the property owners got us here in the first place,” Rodriguez said

Molasses Jones, who lives in the Pescadero Lofts, said she is skeptical about involving the university within the CSD.

“Adding UCSB to the fold is a bad deal,” Jones said. “They’re going to take over this little area that has opportunities to self-govern and create the environment that it wants to create.”

Stanton said he favors elections by district divisions, and wants all members to be democratically elected rather than appointed.

“I’m personally opposed to having any appointed members on the board at all,” Stanton said. “I think one appointee, but if we’re going to have to have one, it should be a student or someone from the administration of UCSB or SBCC.”

Lopez said the district-based voting has the potential to represent different interests in I.V. and that different groups of residents, such as long-term, home-owning, low-income or student residents, tend to live in different parts of I.V.

Stanton, however, said he thinks there will be appointees on the CSD board due to pressure from the university and property holders or business owners who do not live in I.V.

“I think it’s inevitable we’re going to end up with one or two, because that’s the consensus,” Stanton said. “But I don’t like it.”

Bates said he hopes to see an increase in student involvement with the CSD process than he has seen so far, based on an observation that very few students were present at the meeting.

“It’s always better to have more students involved in the community,” Bates said. “Whenever students turn up I think more can be achieved.”

Another issue groups discussed at the meeting was how the CSD would represent I.V. property owners. Rodriguez and Stanton both opposed property owner involvement, but Lopez said it is necessary to include in the CSD.

Jones said she does not want companies who own property in I.V. to have control in the CSD.

“The way Isla Vista has been in the past few years, I don’t think anyone who doesn’t live in I.V. should be involved,” Jones said. “They’re just collecting rent.”

According to Jones, including appointed positions to the CSD from university or property representatives take away from the idea of I.V. “self-governance.”

“I don’t like the idea of giving control up to other people,” Jones said. “It’s called self-governance for a reason.”