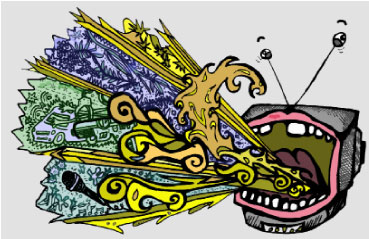 To the naked eye, it seems the general American public loves reality to which it can relate; reality television shows such as “The Bachelor” and situational comedies like “Family Guy” that mimic real-life America fill the TV Guide all day, every day.

According to a Barna Group study in 2014, 74 percent of Americans turn on their TV every day, and according to the A.C. Nielsen Co., the average American watches more than four hours of TV each day (or 28 hours/week, or two months of nonstop TV-watching per year). In a 65-year life, that person will have spent nine years glued to the tube.

So, with that many Americans watching television each day, why is the general public so misinformed about most scientific questions? Why do people choose to watch the reality of someone else rather than live their own?

Genetically modified foods, global warming, offshore drilling and increased use of fracking — these complicated topics are not attractive. Most would say that they would rather spend an afternoon keeping up with the Kardashians than get into a debate about one of these issues.

But in a world full of war, climate change and social and economic inequality, are people just starting to ignore problems?

Especially here in Isla Vista, people are more concerned with what alcohol to buy or which parties to hit than which countries are being overrun by corrupt government and war. Videos of simple social experiments with the goal of gathering information about how well Americans know the world around them litter the web, and it’s easy to see that the people are more knowledgeable about Miley Cyrus’ tweets than about Obama’s veto on the Keystone oil pipeline.

What’s frightening about these videos and statistics is the amount of people that disagree with science — more specifically, the thoughts of scientists. Tim McDonnell at Mother Jones published an article titled “This Chart Shows That Americans Are Way Out of Step With Scientists on Pretty Much Everything.” The article contains a graph that depicted some of the world’s biggest current issues and the discrepancy between the opinions of the American public and that of scientists.

Some topics didn’t have a very significant gap — as expected. For example, 68 percent of scientists compared to 64 percent of Americans believe that the space station has been a good investment for the U.S.

However, some of the differences were more concerning. Almost 100 percent of scientists believe that humans have evolved over time, whereas only 65 percent of Americans agree. Does this mean that almost half of the U.S. does not know who Charles Darwin was? Or are these people just choosing to think he was a crackpot?

The point I’m making? We’d rather submerge ourselves in the reality of Hollywood’s elite than choose to accept the reality of the world around us. It’s easier to relate to the real housewives than it is to relate to a congressman making decisions about bills and laws.

And by indulging ourselves in this alternate reality, we are sweeping the real problems under the rug. Much like how social media has ruined our social lives, reality TV has ruined our reality by allowing us to live life through someone else’s lives. Jim Morrison elegantly states, “The most important kind of freedom is to be what you really are. You trade in your reality for a role … You give up your ability to feel, and in exchange, put on a mask.”

So while Americans sit on the couch tonight to watch their favorite stars dance or a bloody crime scene investigation, just remember that 50 percent of the public doesn’t think that humans have anything to do with global climate change.

Which reality is more frightening?