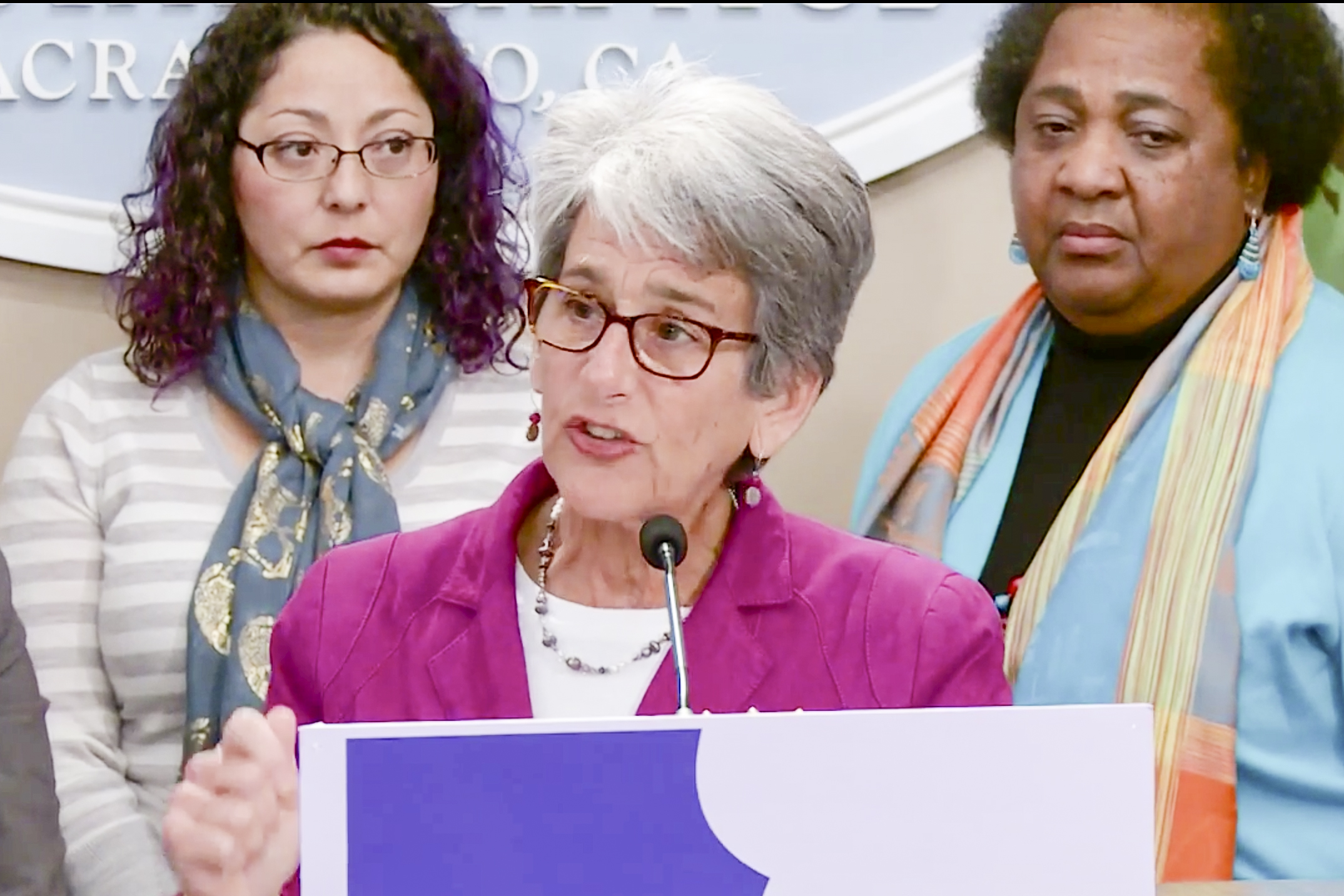 State senator Hannah-Beth Jackson addresses the crowd in Sacramento, CA.
According to Jackson, she has worked on the wage gap issue for years. Courtesy of California Senate Majority Caucus

Although the California Equal Pay Act was first enacted in 1949, working women in California continue to make less than men for the same or substantially equal amount of work. According to Equal Rights Advocates, a national civil rights organization based in San Francisco, the average woman working full-time in California in 2013 earned a median of 84 cents to a man’s dollar.

The gap is even larger for women of color, with African American and Latina women working full-time in California earning an average of 64 cents and 44 cents, respectively, for every dollar earned by white males.

According to Jackson, this is an issue she has been working on for a number of years, and actress Patricia Arquette’s acceptance speech at the Oscars helped shine a national spotlight on wage inequality.

“[Arquette] called for women to have wage equality once and for all, and this was a rallying cry that has energized a movement that has long been fighting for pay equity,” Jackson said.

Associate professor and Chair of the Feminist Studies Department Laury Oaks said Jackson’s bill comes at a public moment on the issue of gender discrimination given Arquette’s speech.

“Feminist and progressive politicians have been attentive to the wage gap for decades, and Senator Jackson is seizing this political moment following the buzz around Patricia Arquette’s Academy Awards speech that diverged from the usual script to powerfully advocate for fair pay,” Oaks said. “Raising awareness about fair and unfair pay is one step. Senator Jackson’s proposal takes the next, practical, legislative step.”

Oaks said the stereotypes and discrimination women face on a daily basis are major contributing factors to the still-existing wage gap.

“The association of women with unpaid labor in the home, sexism in the workplace that elevates men over women, discrimination against women for being mothers as well as workers and cultural assumptions about the value of ‘women’s work’ sustain the wage gap,” Oaks said. “The wage gap has persisted despite the sweeping legal changes that feminist advocates have worked for.”

Jackson said women currently in college need to be made aware of this issue as it will affect them as soon as they search for jobs upon graduation.

“The time for talk is over,” Jackson said. “We need to make a significant commitment to the women of this state, including the young women who are going to be coming out of college with a degree who should be able to compete in the workforce for the same dollars that their male counterparts are making.”

“I’m a cashier in a grocery store and I was doing all the strenuous work and got an injury within half a year,” Mahoney said. “All of the men there seemed to handle it better because men have more of the muscle makeup, and I was even getting paid less for the same work.”

Oaks said because students are the current and future workers, parents and political leaders of the nation, it is essential students support the bill in order to encourage a forward-looking social justice agenda.

“Paycheck fairness affects each and every one of us. Who would argue that their mother, grandmother, aunt, nieces or daughters should earn less than the equivalent pay that male family members earn?” Oaks said. “We all have a stake in arguing for Senator Jackson’s bill and federal legislation to reduce or erase the wage gap.”

According to Ruth Chance Law fellow equal rights advocate Marisa Diaz, students, along with all Californians, should support the bill because the gender pay gap “is an issue for every generation.”

“It will continue to be unless we work together to strengthen the laws on the books and to increase public awareness and engagement,” Diaz said. “The bill will go through an amendment process over the coming months and it will hopefully become law this legislative session.”

Jackson said jobs stereotypically considered “women’s work” are still paid less even if those women have the same or higher qualifications than their male counterpart.

“Many years ago, when we started looking at how women were paid in the workforce, we noted that women are put in different silos,” Jackson said. “Jobs that are deemed to be women’s work were paid less than jobs that were deemed to be men’s work, even if the amount of education, experience, responsibility, what-have-you were the same or even higher.”

According to Diaz, the organization has been working closely with Jackson to create and refine the bill and will continue to engage in legislative advocacy in support of the bill throughout the 2015 legislative session.

“[The bill] will strengthen the state’s existing equalpay law by eliminating loopholes that prevent effective enforcement and empowering employees to discuss pay without fear of retaliation. The California Equal Pay Act (CEPA), enacted in 1949 and last amended in 1985, contains out-of-date terms as well as loopholes that make it difficult to enforce in practice,” Diaz said in an email.

Key revisions included in the Fair Pay Act include the requirement of equal pay for work of “comparable character” instead of “equal” work, as well as eliminating the outdated “same establishment” requirement, replacing the badly-defined “factors other than sex” to justify unfair pay differentials with a list of specific affirmative defenses. Revisions will also discourage pay secrecy by prohibiting retaliation or discrimination against employees who disclose, discuss or inquire about their own or co-workers’ wages for the purpose of enforcing their rights under the CEPA.

Diaz also said Jackson’s bill will, if enacted, amend portions of the CEPA to make the 1949 law easier to enforce, which she said is important because of its relation to the rate of poverty in California.

“The persistent disparity in earnings across every occupation has a significant impact on the welfare and economic security of millions of women and their families in our state and contributes to the higher poverty rate among women — especially among women of color and single women living with children,” Diaz said in an email.

Jackson said she expects the bill to receive criticism from “the business community,” which she said can further delay the much-needed revision to CEPA.

“I think the chamber of commerce will say, ‘Well yes, we agree, but we don’t like the way you’re doing it,’ or ‘The marketplace should be the basis upon which the pay for women is achieved, or the pay for everybody is achieved,’” Jackson said. “The fact of the matter is that women’s work is historically undervalued and we continue to make less than men for similar work and we need to shift that.”

A version of this story appeared on page 7 of the Thursday, March 5, 2015 print issue of the Daily Nexus.

What will Senate Bill 358 do that these measures didn’t do: -The 1963 Equal Pay for Equal Work Act -Title VII of the 1964 Civil Rights Act -The 1978 Pregnancy Discrimination Act -Affirmative action (which has benefited mostly white women, the group most vocal about the wage gap – tinyurl.com/74cooen) -The 1991 amendments to Title VII -The 1991 Glass Ceiling Commission created by the Civil Rights Act -The 1993 Family and Medical Leave Act -The Age Discrimination in Employment Act -The Americans with Disability Act (Title I) -Workplace diversity -The countless state and local laws and regulations -The thousands of… Read more »

Hannah Beth Jackson, You are being paged by the people beyond our Glorious state of California to step up and continue on your work as a US Congresswoman.
You and Lois think a lot alike and you are so good at finding out what the people want and supporting them with your vote, not your own interests or your own opinion which is what all elected people are elected to do.. You do your job, now please consider running for Lois Capps seat which she is retiring from.
Sincerely,
Kelly Ann Pritchard
Isla Vista,
California 93117