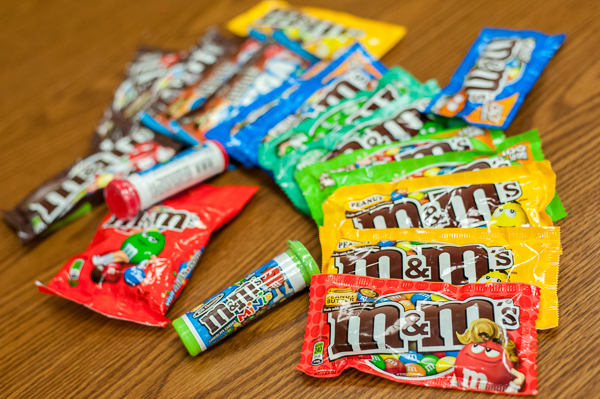 The Nexus might have a candy problem. Don’t judge us, or our cavities. Lorenzo Basilio/Daily Nexus.

Chocolate. It fills the cracks in the heart. Whether those cracks are caused by exam anxiety, post-breakup emotions or a season finale, sweets are a must. You tried to make all that discounted, post-Valentine’s day candy you hoarded last through finals, but alas, to no avail. Willy Wonka’s chocolate river has run dry and you’re left yearning for that sweet cocoa fix … and what better way to quench that thirst than with a bag of candy-coated morsels? Ah, yes, the classic M&M. But which to choose? With the recent comeback of the Crispy variety and all the old favorites still around, you may be tempted to sample the bunch. Let the Nexus save you the time and calories. Sugah Mama and her Candy Crew — Sweetie Pie, Peppermint Patty, The Candyman, Salty But Not Sweet, Let’s Choc’ About It and Chocolate Rain — have taken the liberty of critiquing every flavor of M&M’s available at I.V. Deli Mart for your pleasure and convenience.

The Candy Crew’s top pick, though only by plurality, is the Pretzel, M&M’s’ newest addition to the franchise. Back in 2010, some snack-food mastermind decided to appeal to the salty-sweet-loving world with these beauts. A chocolate-covered pretzel that melts in your mouth and not in your hand is surely the brainchild of an engineer and a foodie. With that irresistible salty-sweet crunch presented in a form that walks the line between delectable treat and casual snack, it’s easy to surpass the suggested serving size. The only question that arose from this tasting was, “Are there any more pretzel ones?” But, like anything great, Pretzel M&M’s have their haters. In this case, The Candyman can’t.

“The pretzel one is just like a pretzel. I don’t know why they even made M&M’s.”

Let’s Choc’ About It wasn’t much of a fan either, deeming them too “chalky.” All right, all right. Sugah Mama admits that the ratio could stand to be a bit less pretzel-heavy in favor of some cocoa, but it all comes down to this: Carbs, salt and chocolate? Oh you KNOW Sugah Mama is in.

Sugah Mama loves Crunch, Krackel and the Rice Krispie triplets, but while the crunch of a pretzel-chocolate pair is more than worth it, puffed-rice-filled M&M’s are not. Rightfully deemed the “poor man’s M&M” by Salty But Not Sweet, these treats are not worth the comeback hype. Sugah Mama’s hopes were high, but the ratio is off and the flavor is lacking. If it’s texture and taste you seek, got for the Pretzel. These M&M’s are underwhelming. Still, the Candy Crew doesn’t hate them. Sugah Mama stands by Let’s Choc’ About It when he says, “Not enough chocolate, but I’d still eat the entire bag.”

When faced with the choice of Peanut or Peanut Butter, the Candy Crew overwhelmingly favored the classic nut. Now, now, don’t get your knickers in a knot. Sugah Mama — a self-proclaimed peanut butter fiend — was as surprised as you are. Perhaps it’s the crunch factor that’s so appealing. Maybe it’s the illusion of putting something of vague nutritional value in your body. It could even be that Peanut M&M’s take us back to a simpler time of high school play intermissions and afternoons at Grandma’s house. Regardless, when tested side-by-side, the Peanut variety are undeniably more enjoyable. Not to mention, the “real peanut butter” just doesn’t cut it for the Candy Crew.

Sugah Mama: “How’s the Peanut Butter?”
Salty But Not Sweet: “It’s like when you’re around drywall dust and it gets in your mouth a little bit.”

If you like Junior Mints and hate happiness, Sugah Mama’s got just the thing for you. In the words of Let’s Choc’ About It, Mint M&M’s are “like a York, but worse.” To be fair, Sweetie Pie did point out that this variety is the most aesthetically pleasing, especially with St. Patrick’s Day on the horizon. A bowl full of these smooth, cool green morsels would make a great visual addition to any table. Still, while Sugah Mama is a freckled, potato-loving, tried and true Patty to the core, these Irish eyes aren’t smiling. Eating a Mint M&M has the same effect as eating a spoon-full of toothpaste full of chocolate-candy bits. The flavor of brushing your teeth with none of the satisfying, clean feeling. Come to think of it, though, that may be just what you need after whiskey, corned beef, Guinness and cabbage have all graced your palate. Sugah Mama will let Mint M&M’s off easy just this once in the spirit of the season.

Peppermint Patty: “The dark and the regular taste exactly the same … but I still like the regular ones better.”
Can’t go wrong with the original. ’Nuff said.

Dark chocolate lovers be warned: Dark Chocolate M&M’s are made for the masses. This is not the exotic 85 percent cacao with a candy coating you hoped it would be. This is the M&M for suburban mothers who justify eating sweets by reading articles on how dark chocolate and a glass of wine each day is beneficial to your health. In a blind taste test, it is doubtful that the average Joe could differentiate between Dark and original. Let’s Choc’ About It and Sugah Mama herself, both dark chocolate enthusiasts, agree that eating a family-sized bag of these would be better than the ever-so-slightly sweeter milk chocolate kind. However, if it’s true dark chocolate you seek, M&M’s have fallen flat.

Sure, variety of flavor is important, but there is certainly something to be said about that simple, magical candy-to-chocolate ratio. Ain’t nothin’ wrong with the normal-sized ones, but dayyyuummm Mini M&M’s have truly got it goin’ on. Whether it be for ice cream sundaes or just poundin’ ’em back, these lil babies are irresistible. With that said, make sure you’ve got a fair supply. Sugah Mama does not recommend Minis at the movie theater — they’ll be gone before the first preview is over. Let’s Choc’ About it speaks for most of us when he says, “I eat regular M&M’s. These I take down in a swig.”

The Candy Crew’s general thoughts on this one: “Why?????” The candy-to-chocolate ratio that makes Mini M&M’s slightly better than the classic makes these slightly worse. These “Ogre Sized M&M’s” were originally invented as a promotional shtick for the “Shrek” movies back in 2007. Why Mars decided to bring them back last year, Sugah Mama has no earthly idea. Aside from maybe decorating baked goods or causing one to feel like a slightly smaller human being, these candies have no pleasurable use. The Megas aren’t even outstandingly large. As Salty But Not Sweet disturbingly puts it, they’re “the size of a small areola or a very large nipple.”

When you’re buying a bag of Mega M&M’s, you are essentially buying fewer, shittier candies. Don’t waste your time. The Mega M&M raises more critical eyebrows and questions than it does spirits. The verdict: #NotWorth.

If you, like Rihanna and just “wanna lick the icing off,” you may find these M&M’s quite satisfying. These treats are intensely sweet, and finishing a bag on your own would likely lead to mild-to-severe regret and an unfortunate aftertaste. Still, Sugah Mama is unafraid to admit that these are her new guilty pleasure even though a better name for this brand may be “Chemically-Flavored Canned Frosting.”

“It’s like eating an M&M, but then there’s a hint of weird hydrogenated-oil frosting at the end,” Chocolate Rain mused.

These M&M’s are likely meant to appeal to the 12-and-under age range, but we all crave some of those multi-syllabic, unpronounceable ingredients sometimes. Sugah Mama, for one, is a fan of Oreo’s constitutionally ambiguous take on birthday cake. In short, Birthday Cake M&M’s will gain you fewer judgmental glances than a tub of icing and a spoon, so they’ve got Sugah Mama’s endorsement.

Sugah Mama admits that she and her Candy Crew have been a bit hard on these M&M’s, but it’s tough love. When finals are hitting you hard and all you’ve got in your pantry are Mint M&M’s, remember: Disappointing M&M’s are better than no M&M’s. Still, Sugah Mama hopes you’ll invest your candy money a little more thoughtfully next time. And with that, the Candy Crew signs off.