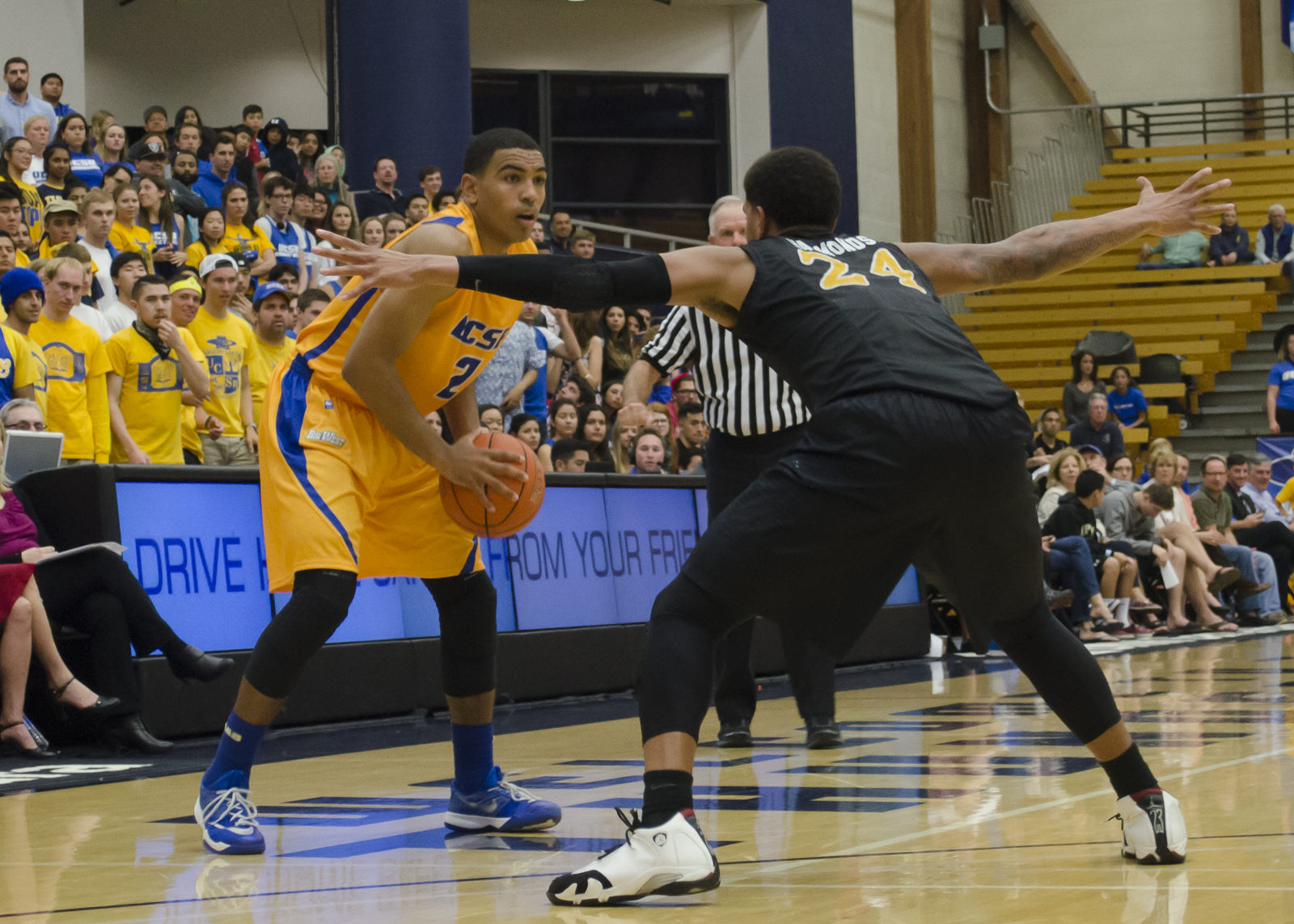 Gabe Vincent received the pass on a broken play in front of more than 4,000 spirited fans in the Thunderdome and even more watching on television. With 40 seconds left in the game and UCSB up by a point against Hawaii, nine seconds remained on the shot clock. Vincent knew he had to gamble.

Guarded man-to-man, he saw a lane, zoomed past his defender, split past two more defenders and set his feet at the top of the free throw line.

Then he rose up with two guys on his grill, threw up the shot falling away and banked it in. He did it with grace and ease despite all that could have gone wrong.

The bucket was the game-winner in the Gauchos’ 75-74 victory that marked a turning point in the season. UCSB would go on to win six of its next seven games after that to put the team where it is now, a half game behind UC Irvine for second place in league.

In the postgame press conference afterward, he spoke with ease not seen in most 18-year-old freshmen that have just won the game for their team. He made light of the magnitude of the discombobulated play with teammate Zalmico Harmon.

“That’s what [Harmon and I] run before practice,” he joked.

Listed at 6’3” and 190 lbs., Vincent has the physique of any normal Division I basketball player, though his talent is far above that. Becoming the first true freshman to start a season opener for UCSB since 2008, Vincent’s sharp shooting and all-around facets of his game have made him an instant-impact freshman on a team in position to win the Big West.

“I can do a little bit of everything, but shooting is probably my best attribute,” Vincent said. “I try to facilitate, I try to do all those little things, so my game is pretty rounded, but it could definitely get better without a doubt.” 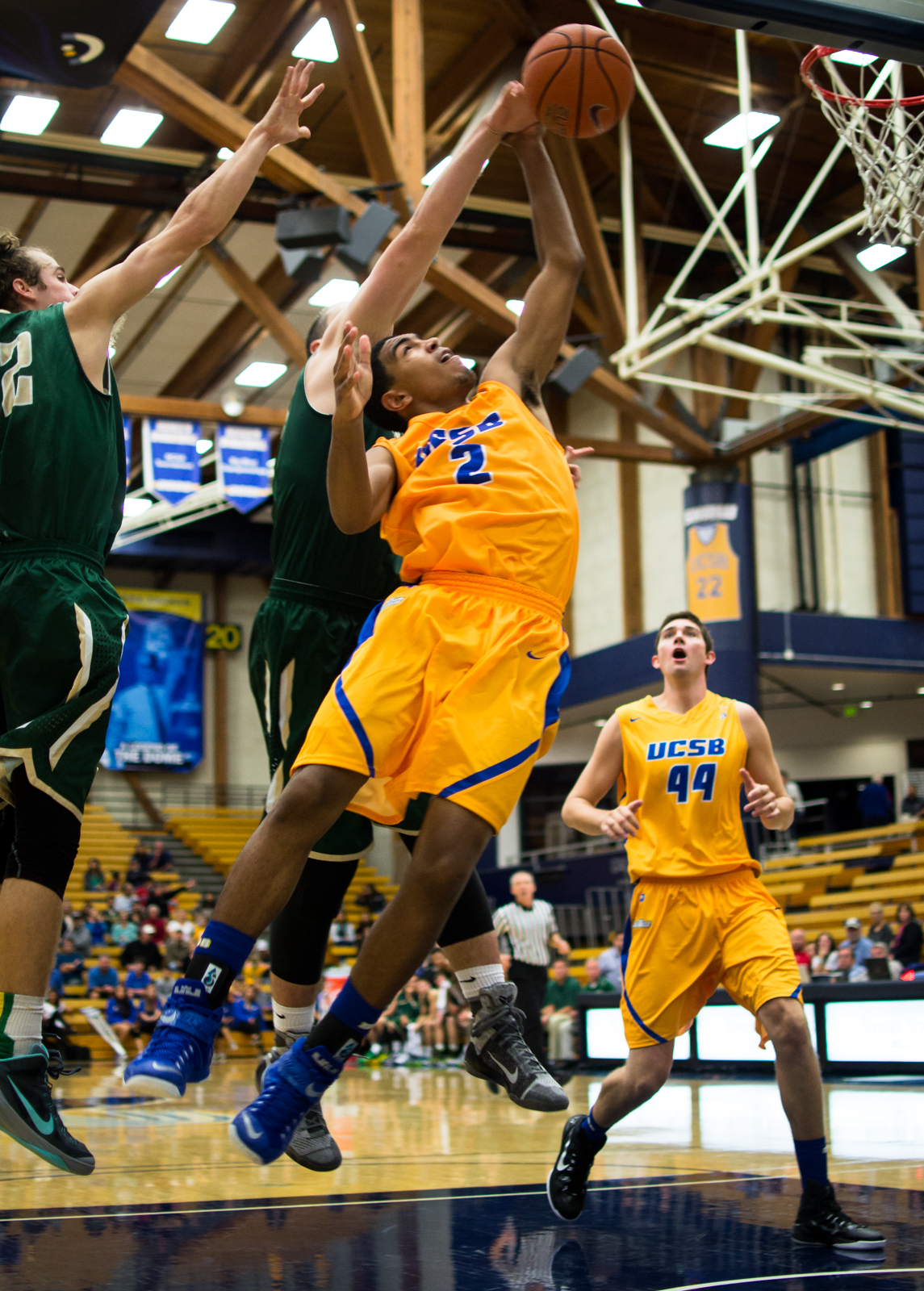 The son of two psychologists, Vincent did not begin to take basketball seriously until the sixth grade. Daily Nexus File Photo

Vincent will need to get better when — not if — he becomes the best player on the team in the years to come. He’s only a few months removed from his senior year of high school, yet he plays like a senior with plenty of poise. He’s had to: to handle the pressure of making a game-winning shot, to have made his collegiate debut on the road against college basketball powerhouse Kansas, to start right away at the off-guard position on a team loaded with veterans.

The youngest of three siblings, he grew up with parents that sometimes brought their work back home. Both his parents are psychologists, an experience Vincent described as “different”.

“They’re in my head constantly without me even knowing it,” Vincent said. “… They know the answer before I can even answer it most of the times.”

His parents had the right read on their son’s talent for basketball as well. Since he was in the sixth grade, Vincent began playing AAU ball, travelling to play in competitions.

He split time playing for St. Mary’s High School in Stockton, Calif. and the Oakland Soldiers on the AAU circuit. It was with the Soldiers that Vincent took the next step to improving his game, playing alongside another talented freshman this year, Arizona’s Stanley Johnson, and against players such as Duke’s Tyus Jones.

Vincent’s place as the starting shooting guard was cemented before he even committed to Santa Barbara, according to Head Coach Bob Williams. He impressed the coaching staff that much. The problem was convincing him UCSB was the right place.

“I wasn’t really interested in Santa Barbara at first because I heard about the whole party scene,” Vincent said. “It didn’t seem businesslike at first.”

While the Gauchos were lobbying hard for him, he was wielding offers up and down the West Coast his junior year of high school. Offers from the University of Portland, Pacific and Utah State came in. In total, he was offered scholarships from 10 different schools, but not until he visited UCSB did his perspective on the campus change.

“I just fell in love,” Vincent said. “As soon as I took my visit I said this is where I wanted to be.”

With persistence from Assistant Coach Ryan Madry, Vincent signed in late September 2013 and proceeded to average 22.8 points, 6.1 rebounds, 4.0 assists and 3.1 steals as a high school senior.

Now with only Saturday’s game against Cal Poly left in the regular season, Vincent has for the most part shed the mistakes he was committing early in the season. What has helped his transition is how quickly he’s gelled with the team. In the season opener against Kansas in front of 16,300 screaming Jayhawks fans, it was just him and his teammates on the court.

“I was still able to understand everyone on my team. It was almost as if I had been around them enough to that they were the only voices I heard,” Vincent said. “… The crowd just seemed like white noise.” 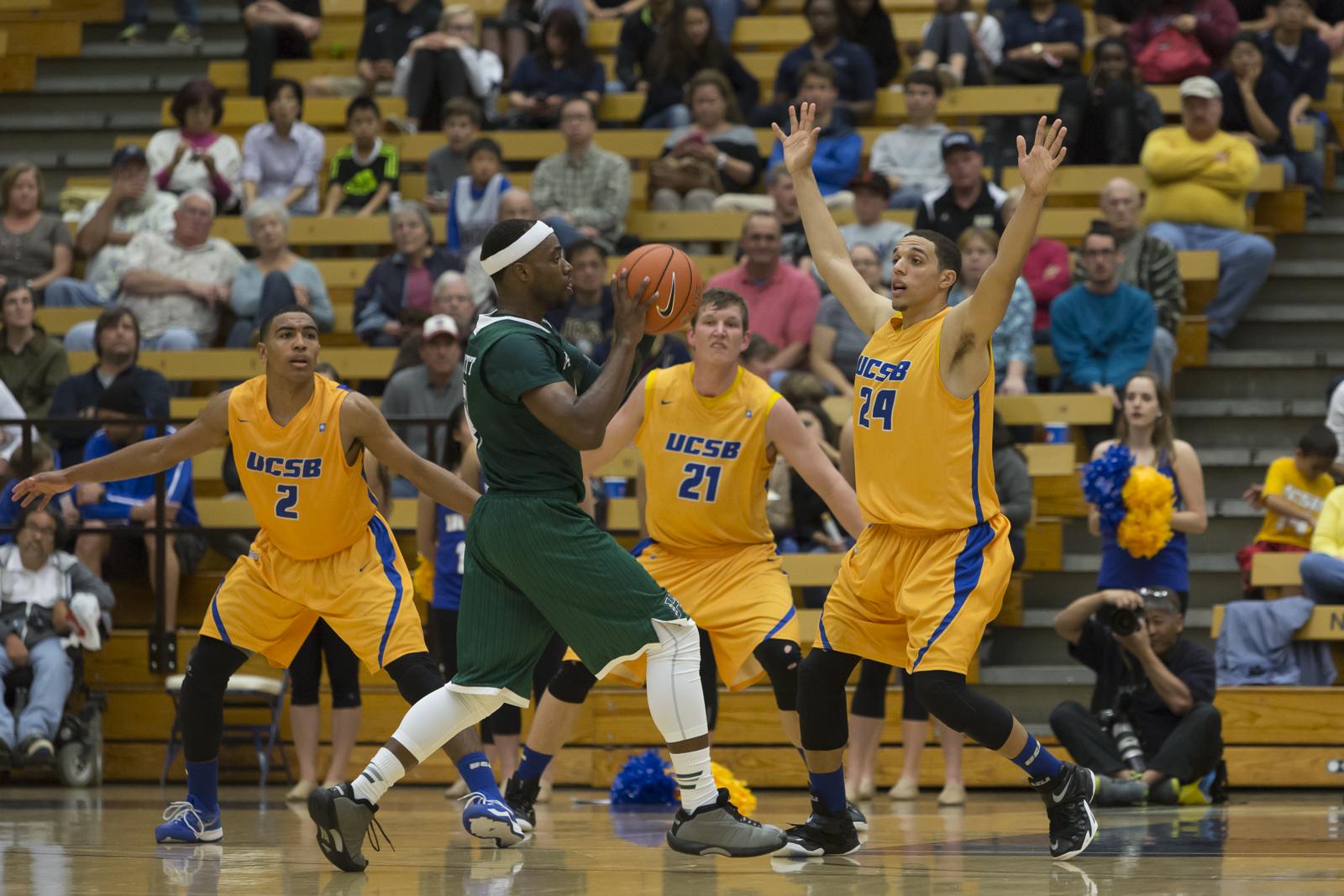 This season has seen him demonstrate his future potential. Against No. 22 Southern Methodist University in Dec., he knocked down the game-tying three pointer that sent the game into overtime. His best game offensively came Wednesday night at Hawaii, where he scored a career-high 25 points on 8-13 shooting from the field.

It is not surprising to hear how Vincent talks about his role as the team gets ready for the Big West Tournament next week. He knows the one-and-done nature of postseason play and realizes he needs be ready when the time comes.

“We’re playing for something else, so it makes everything more important. It raises the stakes,” Vincent said. “I just think it’s import for everyone to embrace their role and not fight it.”

So what keeps one of the frontrunners to the conference’s Freshman of the Year honor grounded? Eyes to the sky. That’s Vincent’s motto to remind him how he got here. He anticipates he might be the future of UCSB men’s basketball. Nonetheless, he remains even-keeled about the situation.

“It’s the elephant in the room sometimes, but I try not to think about it too much,” he explained.

For now, however, UCSB is more than satisfied with Vincent driving past defenders, setting his feet, snapping his wrist towards the basket, watching if the ball will go in. And Gabe always with his eyes to the sky.

A version of this article appeared on page 11 of March 5, 2015’s print edition of the Daily Nexus.