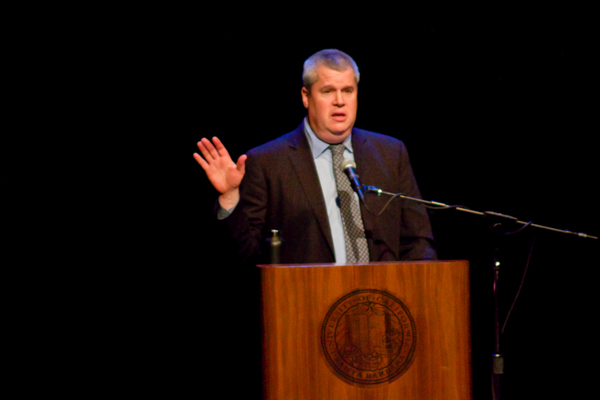 In San Francisco in 1980, Daniel Handler was a 10 year-old boy with a voracious appetite and fervent passion for literature. He can still hear the thuds of disfavored books as he threw them, unimpressed, against the wall. That contempt was rivaled by the sentiment he harbored for the books he loved, the ones which inspired him to become a writer. He namely credits The Egypt Game by Zilpha Keatley Snyder as his favorite book, one that he’s read countless times.

Now in his 40s, Handler is a hugely successful author, novelist, screenwriter and musician (he sometimes plays accordion for the indie-pop group Magnetic Fields). He was invited to Campbell Hall on Monday, Feb. 23 to deliver a lecture titled “Who is Lemony Snicket? And Other Wrong Questions,” which was part of UCSB’s Arts & Lectures winter season.

The author works under his own name, as well as the mysterious moniker “Lemony Snicket.” The pseudonym dates back to his post-collegiate days working at the Computer Science Department of the City College of San Francisco. Handler passed time by writing enraged letters to the city council about any and every new initiative that was to take place, all beginning with “How Dare You!” and all signed as Lemony Snicket.

His most widely known work is perhaps the children’s books A Series of Unfortunate Events (and yes, they did get picked up for a Netflix Original Series). During his talk at Campbell, a Q&A opened up and blooming lines of inquisitive students formed. When asked what his motivation behind writing A Series of Unfortunate Events was, Handler responded in a deadpan style and said that he just thought it was fun thinking up horrible situations to put children through.

Perhaps the most remarkable thing about these books is how much stories about three orphaned children who are constantly being tormented by life’s unfair circumstances resonate with fellow children. Many of the students asking questions thanked Handler for making children’s books that delve into deeper impressions of strife and injustice that often accompany early youth.

Rather than trying to weave morals into his books (something that drove him to throw others against walls years ago), Handler says the most important quality he wants his stories to possess was articulated to him in a letter from a child: “I’m always curious when something happens.” Looking back at the insanely fabricated plotlines he construes, this makes perfect sense.

In fact, most of Handler and Snicket’s works, even those not intended for children, target feelings of injustice amongst youths. This is inherent throughout his first novel, The Basic Eight, the plight of the Baudelaire orphans in A Series of Unfortunate Events and up to his most recent novel, We Are Pirates. We Are Pirates tells the story of two 14-year-old girls who cultivate an unlikely crew and steal a ship to live like pirates in the San Francisco bay.

Handler’s talk essentially told the story of his life and how he became a writer, accommodating the many hopeful young writers in the audience. He is a master at dramatic pauses that add humorous effect to his speech and he takes a not-so-small delight in being mildly morbid and cynical. Even so, he is offhandedly thoughtful, and values being respectful and kind. It is easy to see how his works are all merely reflections of a dark and ominous worldview, one that is evidently wildly relatable to kids.