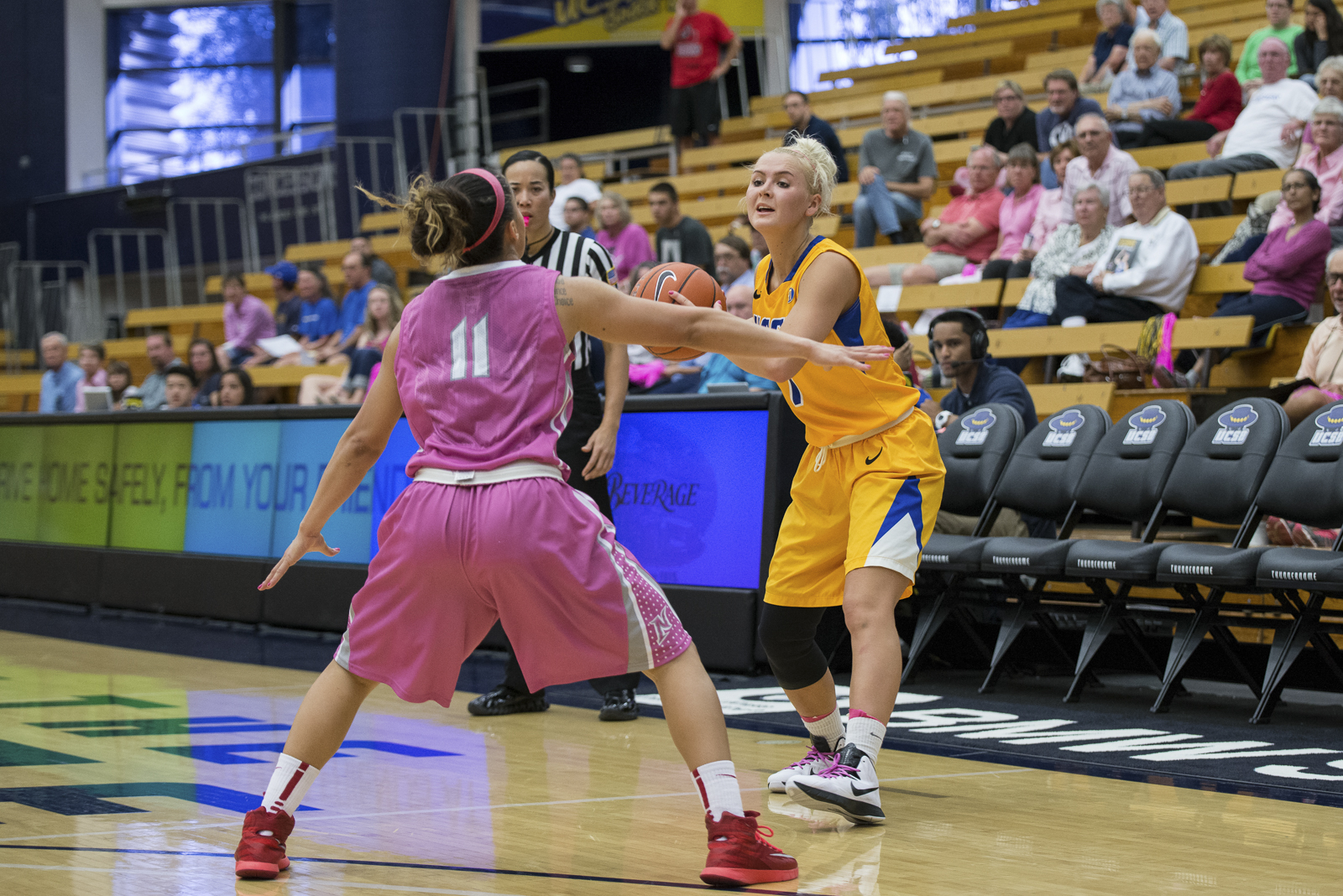 Kristine Brance looks for an opportunity to pass the ball. Eric Swenson/Daily Nexus

Although the UCSB women’s basketball team has been eliminated from postseason contention, it has saved its best basketball for the final stretch of the season. The Gauchos will close out their 2014-15 campaign with a home game against Hawaii today before their season finale at Cal Poly on Saturday.

An upset win on the road over UC Davis last Saturday gave UCSB just its second win of the year, improving its record to 2-25 overall and 2-12 in the conference.

Hawaii comes to town with the best record in the Big West at 20-7 overall and 12-2 in the conference. The Mustangs enter in third place with a 14-13 overall and 9-6 conference mark.

Junior guard Jasmine Ware has taken over as UCSB’s top offensive player, scoring in double digits in three of her last four games. At 9.9 points per game during Big West play, she leads the way for her team which ranks last in the conference in a number of offensive categories, including points, field goal percentage and assists.

Tonight, Santa Barbara will face a Hawaii team which has been nearly unstoppable in the New Year. After dropping their first two conference games, the Rainbow Wahine have won 12 straight to take their place at the top of the conference.

Hawaii ranks second in the Big West in points, averaging 68.5 a game. The Rainbow Wahine do much of their damage at the free throw line, where they rank first in makes and attempts. This could be a problem for a Gaucho team which has consistently been outshot at the line, as they enter in last place in both categories.

The Rainbow Wahine are first in the Big West in blocks with 3.6 per game, led by senior guard Shawna-Lei Kuehu with an average of 1.3. Kuehu is also her team’s leading scorer, coming in averaging 12.4 points a game on an efficient 49.8 percent shooting, good for third in the conference.

On Saturday, UCSB will close out the regular season against rival Cal Poly. The Mustangs will have a huge advantage in rebounding, coming in at second in the Big West averaging 42.2 a game. Rebounding has been a point of emphasis for the Gauchos as they have only outrebounded their opponents three times this season in 27 tries. UCSB is last in the conference in rebounding margin with a mark of -9.3.

The Mustangs own the conference’s top passer in senior guard Ariana Elegado, who averages 4.7 assists per game. Elegado is also the only player on her team averaging double digits in scoring, coming in at 14.9 points a game.

UCSB is set to tipoff with Hawaii tonight at 7:00 p.m. in the Thunderdome. The Gauchos will then close their season out against Cal Poly on the road this Saturday at 2:00 p.m. in Mott Athletics Center.