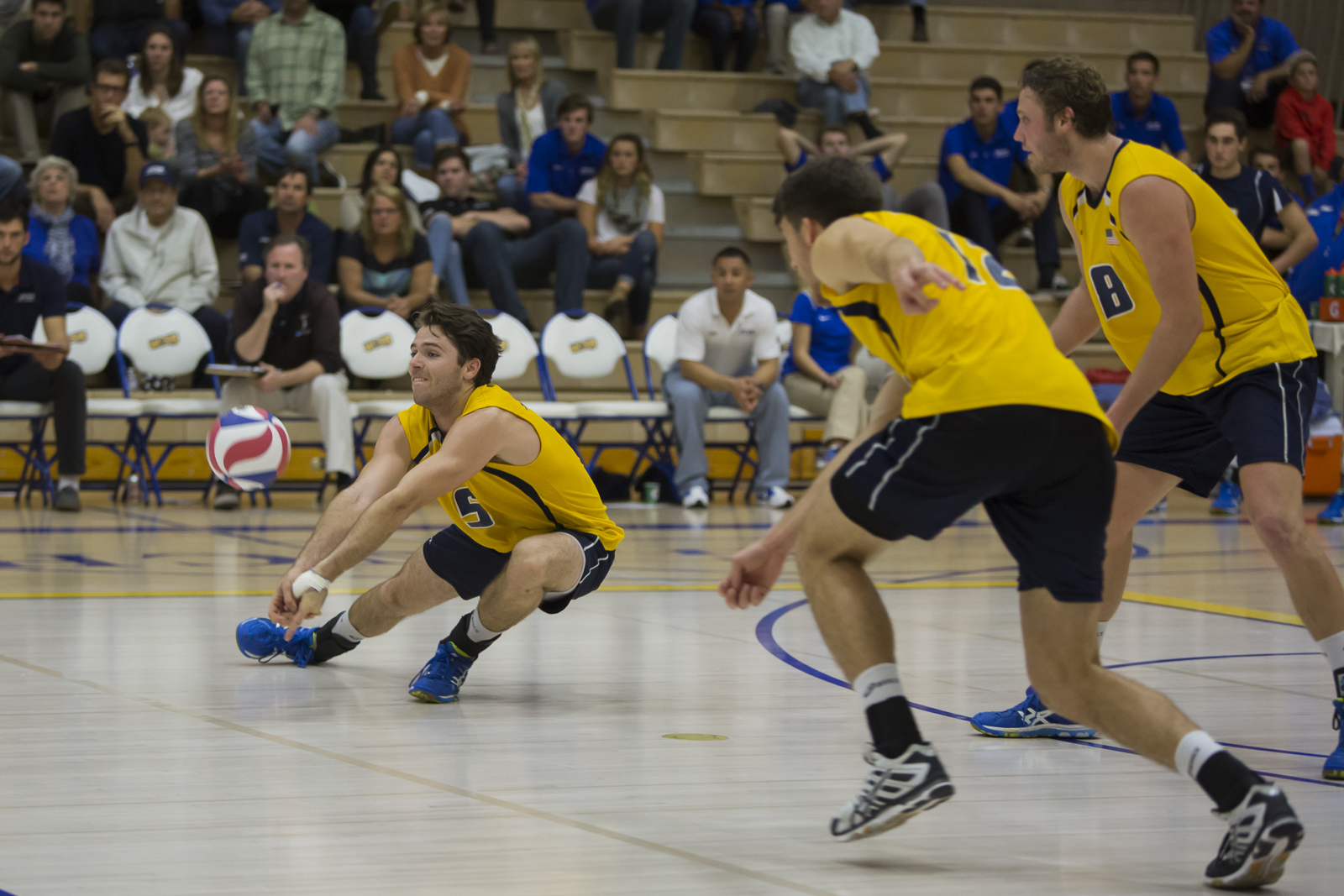 The No. 8 UCSB men’s volleyball team’s historic run of 14 straight games won came to an end Saturday night against No. 3 UC Irvine with a 25-21, 31-29, 25-18 loss to the Anteaters the night after a win over UC San Diego. The loss ended a five-match winning streak and the Gauchos hope it will only be a small roadblock as they continue to make their way up the MPSF standings.

“[UCI is] top of the conference; that’s a really good team,” junior setter Jonah Seif said. “I think we can beat that team. Things will be different when they play us at our home gym.”

The loss to the Anteaters brings the Gauchos’ record to 11-6 overall and 7-6 in conference play. UCSB struggled offensively throughout the match, hitting only .173 overall, the team’s second worst hitting match of the season. Redshirt senior outside hitter Kevin Donahue led the team with 15 kills, yet he took 39 swings, giving him a .205 hitting percentage.

Middle blockers Jake Staahl and Ryan Hardy had success, but they weren’t set enough due to Santa Barbara’s average passing. Hardy, a redshirt junior, had six kills on 10 swings and Staahl, a redshirt senior, added five kills on nine swings.

The Anteaters are extremely strong at the net and they showed it Saturday night with 14.5 blocks. UCI’s explosive offense hit .433 in the match, led by sophomore opposite Tamir Hershko’s 12 kills and junior outside hitter Kyle Russell’s 11 kills from 20 swings.

Sophomore opposite Michael Saeta dished out 40 sets and he also put down four balls out of five attacks, and senior libero Michael Brinkley had an amazing night with 12 digs to pace the defensive effort as he seemed to be tracking down shanked balls and extending points constantly.

“We didn’t put enough service pressure on them,” Seif said. “Overall, we didn’t get them off the net [without serves] and they were able to run a good offense.”

The Gauchos put up a fight throughout the night, keeping up with UCI in the first game at 9-9 before the Anteaters went on an 8-4 run to take a lead they would not relinquish. The second game was the longest for the Gauchos this season and it was one they would have liked to have had back.

Up 24-21 they had three chances to win the set, but after errors from Donahue and redshirt senior outside hitter Weston Nielsen, and a kill from UCI’s senior opposite Zack La Cavera, the game was tied. Russell got the game-ending kill at 30-29 and it was too much for UCSB to handle as it lost the next game 25-18.

The loss on Saturday came the night after the Gauchos won a relatively easy match against UCSD 25-14, 25-15, 25-15. Redshirt sophomore Jacob Delson led the team with 11 kills and Staahl added six kills to go along with four blocks.

“On Friday we were doing everything well. We passed well, we served well and we had a lot of one-on-one opportunities at the net,” Delson said. “On Saturday we still passed well but we couldn’t finish and you can’t expect to win any games against a team as good as Irvine.”

The Gauchos hope to start another winning streak on Wednesday when they take on No. 10 Long Beach State at Rob Gym at 7 p.m.