After numerous falls and months of delay, university pledges to pay for project’s full cost 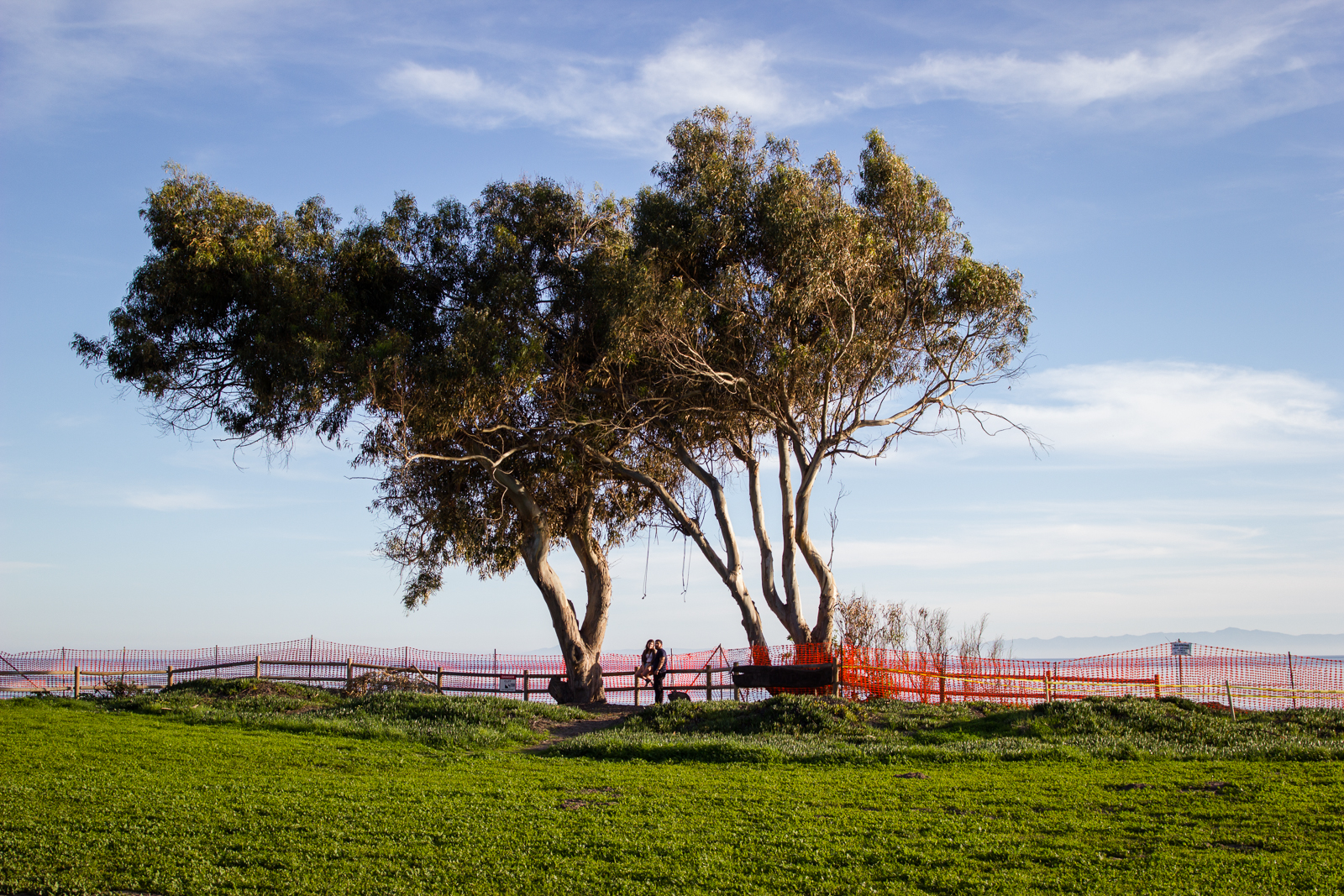 Isla Vistans lean against the old wooden fence along a stretch of Del Playa bluffs, with temporary orange fencing behind them. A more permanent solution—of wood fences up to four-and-a-half feet tall—will be supported by $70,000 from UCSB, the university announced Tuesday. Brendan Mansfield/Daily Nexus

UCSB announced Tuesday that it will provide $70,000 to Santa Barbara County for the construction of permanent fences along the bluffs in Isla Vista.

The university said it will cover the entire estimated cost for the installation of the fences and has agreed that if the project comes in under budget, the remaining funds will be used by the county for maintaining the fence. The fences will run from the end of Del Playa Open Space Park to Walter Capps Park and will include all parks owned by the county and the Isla Vista Recreation and Park District (IVRPD). Once the fence is completed, the county will assume responsibility for future maintenance and repairs.

Associated Students External Vice President of Local Affairs (EVPLA) and fourth-year psychology major Cameron Schunk said Chancellor Henry T. Yang’s involvement in the fencing project since the death of multiple students from cliff falls in 2013 has largely contributed to the university’s decision to provide funding to the county.

“Chancellor Yang has been deeply involved in this project since the beginning, when Molly Morrison founded Fence Isla Vista, and since we lost students to cliff-related deaths and injuries,” Schunk said. “Yang has taken a very active and involved role in this entire effort so I think part of it was him pushing it and making it a top priority.”

Fourth-year biological sciences major and Fence I.V. founder Molly Morrison said she founded her organization, which aims to improve current fencing standards along the cliffs on Del Playa Drive, after her friend and Cal Poly SLO student Giselle Ayala, along with three other students, died after falling from the cliffs since April 2013.

“I think it’s extremely vital to make these occurrences as preventable as possible,” Morrison said. “I do believe the personal responsibility is also an extremely vital aspect in these scenarios, but there is work to be done on both ends to help end these tragedies.”

Morrison said she believes the university decided to fund the project due to Santa Barbara county’s historical lack of funding to improve fencing along the I.V. cliffs.

“It’s not so much that they have been inactive, but that it has taken so long to find a source of funding that should normally be very fast, as fencing is one of the largest safety concerns in Santa Barbara area,” Morrison said. “[UCSB’s contribution] is extremely helpful, as it is funding the entire project. I am so grateful for the generous donors who have dedicated their resources to help make this place safer.”

According to IVRPD general manager Rodney Gould, the university’s contribution to the project is critical to its timely completion because the project was not a budgeted expense for the district and therefore was difficult to fund. Gould said construction should begin shortly given the end of the permitting process.

“I know the funding has been received by the County and they are in discussions with a contractor,” Gould said in an email. “My best guess, and it is only a guess, is that construction will begin in the next few weeks.”

Schunk said the fences installed along the bluffs will be three-ring wood fences up to 54 inches high with diamond-shaped, nylon-coated chain links to prevent someone from being able to climb over the fence.

“The idea for the small diamonds is so you can’t fit your hands or toes into it easily and climb over it,” Schunk said. “The thing to keep in mind is we aren’t going for a high security fence because we’re looking at prevention.”

Third District Supervisor Doreen Farr said the university and the county have been working on installing I.V. bluff fencing since last Fall and that the recent funding will finally ensure the project’s completion.

“I asked the chancellor last October in a letter to fund a couple of county projects, starting with the bluff fencing, and the county said that we would do the maintenance once it was installed,” Farr said. “It’s on our agenda for next week so I’m really happy to see that it’s finally coming together.”

Farr also said the county wants to make open park spaces on DP as safe as possible in light historical cliff falls resulting in the death of multiple students since 2005.

“We warn people about the danger of the bluffs and although there have always been some kind of a fence up there to deter people, they either obey the signs or go around the fencing and walk on the other side,” Farr said.

According to Farr, many individuals do not take into account that the cliffs’ eroding nature make their edges particularly dangerous for people treading the Del Playa bluffs.

“People also need to understand that the geologic material of those bluffs are very erosive so they’re constantly crumbling away. I think that’s another reason why people might make the mistake sometimes and think there’s more property on the other side of the fence than there really is,” Farr said. “So we’re constantly monitoring it from a public safety standpoint from the beach side as well as from the upper side.”

Santa Barbara City College (SBCC) trustee and UCSB alumnus Jonathan Abboud said while the university’s contribution is helpful, he hopes it is more than a one-time effort to improve safety in I.V.

“I hope this influx of funds towards I.V. and level of attention is not temporary because of the events last spring, but history tells us it is,” Abboud said in an email. “I’m optimistic that this time around we can come up with a long term solution that keeps everyone involved and helping better Isla Vista.”

[Correction: A previous version of this article incorrectly quoted Cameron Schunk stating a preference for a high security fence. Schunk actually said the fence were for prevention, not high security purposes. This article has been updated accordingly.]

I have long felt that addressing safety along the cliffs in Isla Vista would require student leadership. My heartfelt appreciation to Molly Morrison. There have been too many young people lost to deaths from cliff falls, including our son Noah. Ignorant comments about the reasons these deaths occur are part of a culture of ignorance and indifference that has caused Isla Vista to become a risk filled environment where dozens of young people have died from a variety of causes over the past fifteen years, including at least six from cliff falls in the last decade. I’m glad a fence… Read more »

We are deeply grateful that UCSB and Chancellor Yang are fending the fencing in Isla Vista. That said, the main focus of the fencing should be Del Playa/Sea Outlook Park, where there is a broken, open-ended sand box at the edge of the cliff that looks like natural bluff. It is not, and it is deadly. The bluffs have eroded underneath the black plastic, which, in some places, is all that holds up the sand. It’s not the vast expanse of bluffs that is unsafe. It is the man-made hazard, the unnatural cliff edge in the public park in the… Read more »

My deepest apologies for the misspelling of Sierra Markee-Winkler’s name.

While people are free to say what they will, demonizing our children sadly shows the same pattern of ignorance and indifference that has kept Isla Vista a dangerous place. The fact that there have been few if any cliff falls since the temporary fence went up and no deaths suggests there is benefit to erecting a permanent fence. The view is clearly a higher priority than human life to many or something would have been done years ago. As to the issue of alcohol consumption, Isla Vista is a community with 23,000 kids in a half square mile that hosts… Read more »

Asking an adult 22-year-old to take responsibility for their alcohol usage is not `demonizing a child’. An alcohol BAC above 0.25 reflects very bad judgement. Accusing Isla Vista or other associated localities of a `pattern of ignorance and indifference’ displays massive ignorance of years of thankless hard work by many in the Isla Vista community, dating back to the 1950’s. Isla Vista is simply a wonderful community that parents of tragedy are displacing their grief on to. Coastal access may be a minor issue to some; wealthy folks like David Geffen and Vinod Khosla see it that way. But the… Read more »