The Daily Nexus
Opinion
Saving the Public University
February 26, 2015 at 5:00 am by Chris Newfield 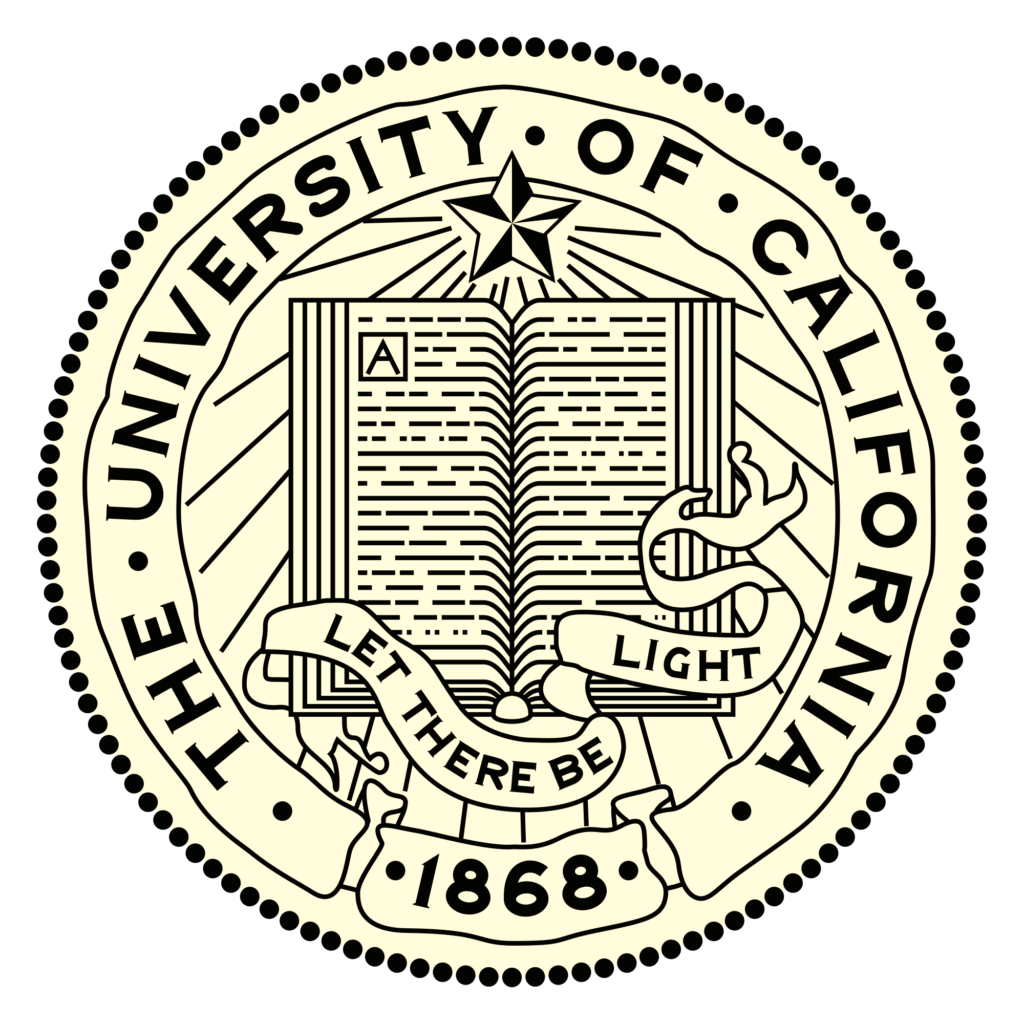 Caitlin Trude: Could you discuss the University of California’s proposed tuition increase in a few words?

Christopher Newfield: No! [Laughter]. The simplest explanation is that repeated state funding cuts have blown several large holes in the UC budget, and the UC central administration only has tuition, plus service cuts, to patch those holes. While enrollments go up and costs go up, California state funding overall has gone down. California higher ed lost almost a third of its state revenues between 2008 and 2013 (the national trend was almost as bad). To put it another way, if UC’s budget had grown with state personal income since 2000, we’d have over $5 billion in state general funds rather than under $3 billion. Somewhere around a third, or maybe half, of the $2.2 billion state funding gap has been made up with huge tuition hikes — tuition rates have more or less tripled since 2000. Politicians have shifted the cost of getting a degree from society as a whole to students and their families. This is the messy, halfway privatization of UC.

But UC policymakers have also been involved in this process. For example, in 2004, the Office of the President (UCOP) signed a “Compact for Higher Education” with then-Gov. Arnold Schwarzenegger that built 7-10 percent annual tuition increases into a deal for stable state funding. Until Gov. Jerry Brown came along to freeze tuition (after imposing more large cuts), UC had raised tuition 18 times in the preceding 20 years. So over the years the university taught the state that whenever it cuts one of the university systems, that university system will get most, if not all, of the money back by charging students more.

This use of the power to hike tuition has let both the state and the university off the hook. It let UCOP off the hook because senior officials didn’t have to push hard for public funding on the ground of the priority of UC’s public educational mission. It let politicians off the hook because they could cut higher ed, keep health care going and not have to raise taxes to appropriate levels to pay for the services people actually want. Politicians correctly assume that if you cut the budget for elder home care, there will be lots of elderly people lying in bed without someone to help them get dressed for the simple reason that they don’t have the money to hire someone privately. So better to charge students and their families, who can either pay directly or pay with debt.

The University has helped Sacramento be selfish and lazy. We didn’t fight like dogs for public funding for the public mission of teaching and research — both of which cost a lot of money when done right, and simply can’t be covered with private funding other than high tuition — so politicians could continue to offer people and businesses artificially lower taxes or even tax cuts in exchange for votes by using the University as kind of a piggy bank. They broke into the University budget bank in bad times, cut the budget that way, and then never paid it all back but just gave back little bits of it, which is what we’re seeing now with Jerry Brown’s four percent annual increases in the wake of 20 percent cuts. I think the state just borrowed UC’s money in 2009 and 2011 and should pay back the full amount — and reinforce the tuition freeze. But obviously Sacramento doesn’t agree with me!”

Education depends on feedback, and that’s where public cuts do real damage.

Q: In one of your blog posts, “The Stakes of the Tuition Wars,” you mention that the quality of education would be compromised as well. Can you expand on that just a little bit?

A: Even if we get the tuition money or its state equivalent, it isn’t enough. We’re not getting back to ground level in terms of operating revenues. This means we can’t shrink class sizes again, and we can’t hire more professors to teach the additional students that we’re taking without getting paid by the state. We’ve been cutting corners since 2008, but there were two previous rounds of cuts that had already done major damage to UC’s offering.

Just to give you one example, one highly-ranked math department in the UC system stopped grading each problem in every problem set in their math courses after the early 1990s cuts — they no longer had enough money in the department budget to hire enough readers. So you assign three problems and you grade one of them while checking to make sure that the other two were done. Education depends on feedback, and that’s where public cuts do real damage.

The reason I’m very concerned about this is that in the 21st century, in a global economy, American students need to be better trained than they were 50 years ago, not given a cheaper version of the factory education of 50 years ago. A lot of high-skill jobs that we used to assume would offer high wages are now being offered with low wages, when an employer can find somebody in India who has better math skills than you did coming out of UC Santa Barbara or UC Berkeley to do the job for a fifth or a tenth of the salary. Do we really want to let this happen? Of course we don’t, but that’s the road that cuts and our continuing austerity are sending us down.

Universities aren’t responsible for the economy or the job market, but we do have an obligation, I believe, to help students develop not only competence but also creative capabilities. We can’t do that if we’re offering a factory education with factory-style funding — ironically, for three times more tuition than 15 years ago.

The dream of the public university was that the state and the country would not have an educational caste system in which the people who could go to your school, Azusa Pacific, or to Occidental or to Stanford or to Pomona College, would get a first-tier education while their peers at UC Irvine or Cal State Northridge would get something standardized and depersonalized. In a system tiered by quality, the Pomona or Stanford graduate, on average, develops the capabilities (and connections) that make them eligible for company boardrooms and leadership in their professions, while standardized educations don’t. I’m opposed to a system in which my students spend their lives taking orders from Stanford or Pomona graduates because they went to a UC school. That’s not my idea of fairness or democracy or what public education is about. Hence my obsession with mass quality — top quality for 20,000 and not just 2,000 students at a time. 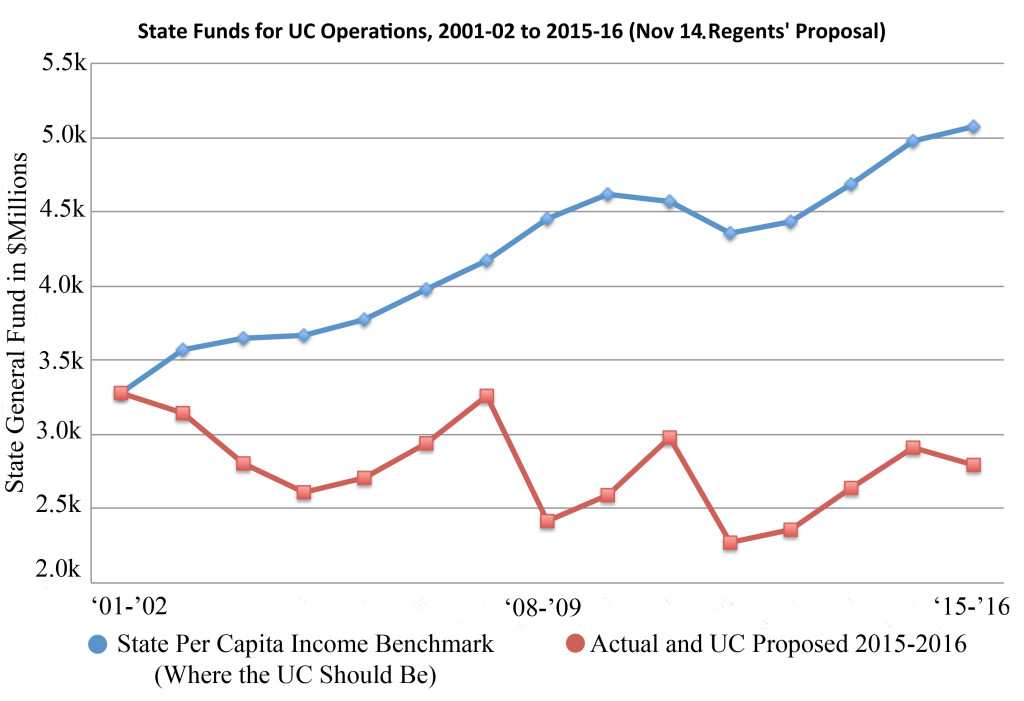 Q: I have seen the quote “My diploma is not a receipt” used as a part of the protest/campaign against increasing tuition costs. What does this quote mean to you, in terms of the cost of education?

A: I think it means “My diploma should have intellectual and educational content.” In other words, that we need to focus on the educational dimension — the practices and the experiences and the teaching and learning and research that goes on — and not just see it as transaction; a contract where I pay you the money and you give me a diploma, which I then exchange for a job.

Q: Do you predict that students will continue to protest until a change is made?

A: Yes, off and on. I do think that there’s real anger and there’s real distress. This past fall, students put the educational quality issue on the agenda. So they’re not just angry at the administration for proposing this fee increase, they’re also angry at the state for having cut, cut, cut and reduced quality even while they force the University to charge more — the famous “pay more to get less.” The student critique is pointing in two directions: two fronts, not just one. And that, I think, is potentially a very rich context in which to continue to protest, and not only protest but also to analyze and discuss and do consciousness-raising with the general public. I think the parents are a key constituency that hasn’t really been addressed.

I’m not sure my faculty colleagues realize the full impact of today’s level of debt. UC does better at keeping debt down than many schools — be glad you’re not going to NYU! I didn’t realize until doing research for a post on student debt that parents who make over $40,000 start to borrow thousands of dollars a year, and when you hit incomes of $80,000 to $100,000, many parents are borrowing $20, $30,000 per year. There’s this hidden debt that parents are taking out, which I just think is shocking. There’s a myth that low-income students are taken care of by financial aid but that’s also untrue: they can easily borrow over $5,000 a year and graduate with more than $20,000 in debt with effectively zero family resources to help pay that off. We as a society — I feel strongly about this — have a moral obligation to cultivate and support the rising generation that is our future. Given the result, you’d think we see them as a profit center for the financial industry, and as a place for older, wealthier taxpayers to save money. That is not an ethical position to me. It’s embarrassing. People write books about the World War II folks, calling them things like “The Greatest Generation.” I don’t want us to be remembered as “The Greediest Generation.”

We need to want to pay the taxes that are actually a more efficient way of getting people to use public higher education, and to get the most out of it, than is this tuition system that we have.

A: We can fix this. It’s affordable. We could cut tuition in half, at the Cal State system and the University of California system, and restore the amount of money that’s basically been taken out of the system since 2001, for a cost to the median taxpayer of $50 a year (see the report at Keep California’s Promise). People think “Oh, we should lower fees but it’s just not affordable anymore; we don’t have enough money.” That’s just not true. What’s true is that we can do it if we want to; we just need to want to. We need to want to pay the taxes that are actually a more efficient way of getting people to use public higher education, and to get the most out of it, than is this tuition system that we have. So it’s doable; we CAN fix this.