The Daily Nexus
Sports
Perseverance On and Off the Court
February 26, 2015 at 6:00 am by Michael Jorgenson 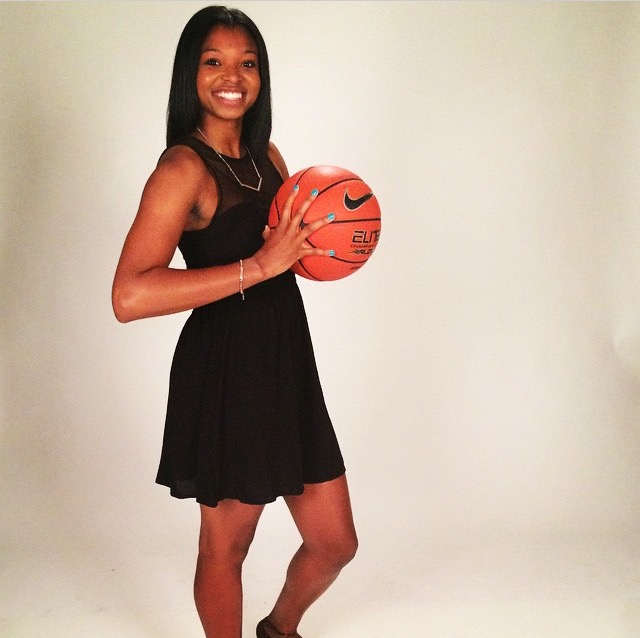 Coming off a devastating ACL injury, freshman forward Chaya Durr has been a bright spot for UCSB/Photo courtesy of Chaya Durr

For many young athletes hoping to play at the college level, the senior year of high school is the most important one of all. It’s where the good talents are separated from the great ones, where all those college scouts who haven’t been paying attention to you get their last chance to see what they’ll be missing out on if they don’t act fast enough. For freshman forward Chaya Durr of the UCSB women’s basketball team though, that chance never came.

After spending much of her sophomore year at Sacramento High being the first name off the bench, Chaya became the team’s leader in her junior year. She consistently dominated opponents with her long and versatile body type and filled the stat-sheet on both sides of the floor, resulting in her being ranked as high as No. 38 in the nation among wing players.

Coming off a tournament in Oregon in which she played what she described as “the best games I’ve ever played in my life,” Durr and her AAU team flew to Tennessee to play in another tournament. Then, at the top of her game and right before her all-important senior season began, disaster struck.

“I was just trying to get to the basket, I was dribbling the ball and I fell,” she said. “I wouldn’t necessarily say anybody hit me, I was just off-balanced, and that’s when I went down. It was really painful.”

There are a select few injuries that every athlete dreads, and even without contact, Durr was handed one of the worst cards she could’ve drawn: she had torn her ACL and would miss her entire senior season.

“I was really devastated,” she said. “I almost couldn’t stop crying because it was still really painful for a few days.”

Although she would have to sit out for the next 11 months, Durr tried to take whatever positives she could from the situation.

“I was thinking maybe it’s meant to be,” she said. “One of my friends told me that it was a minor setback for a major comeback, so that really motivated me a lot to rehab as much as I could when I could.”

Luckily for Durr, who went to high school with current Gaucho teammate junior guard Jasmine Ware, UCSB’s presence was there every step of the way.

“In recruiting Jasmine, we were able to watch Chaya play when she was in ninth and tenth grade,” Gauchos Head Coach Carlene Mitchell said. “We knew that she would be one of those athletes that could be a program changer. We really felt that, so we were able to get her to campus early, get to meet our kids and see what our program was about.”

Despite being faced with an injury that could have drastically impacted the next few years of her life, Durr’s dynamic play prior to her senior year had already earned her a spot at UCSB.

“Unfortunately for her, but maybe fortunately for us, she did tear her ACL and we’ve been there since day one,” Mitchell said. “That’s probably how we ended up with her, a top 30 player in the country with athleticism, work ethic and a blue collar mentality. The sky’s just the limit with her.”

With her final year of high school in the books, it didn’t take long for Durr to make her decision on where she would play in college.

“I committed to Santa Barbara right after [the injury] happened,” she said. “Santa Barbara was the place I had wanted to be forever. My biggest motivation was to get strong for college, because I am going to that next level and it’s going to be bigger and better competition.”

After a lengthy rehab process, Durr finally returned to the court prior to her freshman year, making her first appearance in a UCSB uniform against Occidental in an exhibition game. In just 14 minutes, she scored nine points to go along with 10 rebounds and two steals, immediately proving her value to her new team.

“It was our first game, so of course I was nervous, but I went out and I played really well,” she said. “At that moment I knew coach could trust me; that I could get in and get it done.”

In a season with more downs than ups for a struggling Gaucho team, Durr’s strong performances have been some of the few bright spots this year. After seeing limited time during the first month of play, she again showed her worth in a home game against Washington State, recording her first double-digit scoring performance with ten points. However, it was on the defensive side where she truly shined, as she recorded five steals, tied for the most of any Gaucho this season.

“Defense is my thing. It’s all I really care about,” Durr said. “That’s always been my favorite thing since high school. I know that when I play good defense and I’m getting steals that that leads to the offensive side.”

Another month later against CSU Bakersfield, Durr recorded multiple career-highs with 15 points and eight rebounds, further proving that her ACL was no longer an issue.

“The knee is way in the past,” she said. “I forget I even tore it at some point.”

Unfortunately, against Cal State Northridge just one week later, Chaya suffered a concussion, causing her to miss the next nine games of Big West play. Once again, the injury was extremely untimely.

“When she went down with her concussion, she was probably in the form that we saw in high school,” Coach Mitchell said.

In her return game against Cal State Fullerton, despite only playing six minutes, Chaya may have helped provide the spark that would see the Gauchos win just their first game of the year.

“Right when I got in, I got two back-to-back rebounds, which is what our team was struggling with,” she said. “I was just really excited to be back. I probably couldn’t stop smiling, it was just really tough sitting out even a month because I know what it feels like to sit out and it’s not a good feeling at all.”

With just four games remaining and the Gauchos still with a chance to make it to the Big West Tournament, they will take every contribution they can get.

With Durr finally back and healthy once more, both her play and her infectious personality could be just what UCSB needs to extend its postseason.

“Mentally it’s really hard to come back from injury, but you can never tell because of how happy she is and the fighter she has inside of her,” Ware said. “She’s there when you need her the most. If I threw a bad pass or something, she’s going to try and save it for me. She’s just a real team player and there’s nothing more you can ask for.”

Success might not necessarily be coming to UCSB this season, but with a versatile team player like Durr set to grace the Thunderdome court over the next few years, the future is bright for the Gauchos. With her big injury now behind her, the stage is set for Durr and her team to show everyone what they can accomplish together.

A version of this article appeared on page 11 of February 26, 2015’s print edition of the Daily Nexus.

Good stuff Chaya! We are proud of you, continue to improve each & everyday! We love you!