The Daily Nexus
Music
Zion I Shares Wisdom and Feel-Good Music with Velvet Jones
February 22, 2015 at 2:10 pm by Chinelo Ufondu 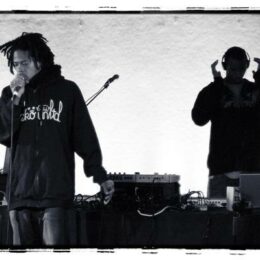 Johnny Cash’s infamous middle-finger photo covered the wall of Velvet Jones, alongside other posters of historical performances. On Friday, Feb. 13, another show went down in history at the esteemed venue: the second stop of the Rapture tour, the world tour of Oakland hip-hop duo Zion I. Those that took the stage with the literal dynamic duo included other NorCal artists Kev Choice, Dame the Drummer, Los Rakas, Locksmith and a special appearance by J. Lately.

The very first opener, Chuck D., began his set on a sentimental note by playing “Amazing Grace” in dedication to friends who passed away recently and helped him achieve two years of sobriety. When the song concluded, he surged into his performance with a personality that filled the lackluster crowd. Chuck D. kept everyone entertained with references to hip-hop greats like Biggie, Kendrick and Eminem, and also asked what was going down on Valentine’s Day. Many in the audience chanted “Fuck it,” to which Chuck D. simply laughed and replied, “You’re all my Valentines.” Afterward, he gave a shout out to Nutella “because it’s fucking delicious.” Yes, it is, Chuck D., yes it is.

The next performer, going by the name J. Lately, quickly segued into his performance. The man-bunned rapper took the stage with hypnotic beats and clever lyrics. The Berkley-native has established himself with three EPs featuring his classic boom-bap style and laidback flow. J. Lately’s unique ability to put everyday life into a relatable perspective allowed him to connect with those at the Velvet Jones.

Next was Richmond-based rapper Locksmith, a familiar face who I happened to run into while walking along State Street. Locksmith’s first official album, A Thousand Cuts, came out in 2014. Locksmith’s powerful performance was secured within two songs. It was his first time ever performing “For Now,” a song based on the idea that, though life can be overbearing, the key is to keep going. For him, drive comes from love for the art, and Locksmith counts his blessings to come to peace.

The second song was inspired by his experience with sexual abuse.

“Though I was scared as I wrote the song being able to put it out there, I felt liberated,” Locksmith said in an interview with the Daily Nexus. “The thing is also not everyone has access to a platform such as mine, but number one thing to do is speak.”

In response to the recurrent sexual assaults that occur here at UCSB, the seasoned rapper jokingly, but with an earnest air, curtly replied, “Transfer to Berkeley.”

Finally Zion I took that stage, placing the crowd into another state of being. After opening with “Juggernaut” off their latest EP, The Sun Moon and Stars, the duo threw it back to their earlier days with “Coastin” and “Trippin.” Powerful stage presence and electro-bass elements gave the audience a unique hip-hop experience.

The Zion I movement is purely “soulful, feel-good, uplifting shit,” according to frontman Baba Zumbi. The idea of feel-good shit could be clearly seen during the performance when a fight broke out in the crowd. Mid-song, Zumbi shouted, “Let’s all keep it unified and harmonious.”

Zumbi kept this same mentality in one of their latest collaborations for the song “Unity,” a song in response to the violence in Ferguson.

“I could easily rap ‘fuck them, fuck the establishment’ but you cannot conquer hate with more hate. Love will always conquer hate,” Zumbi said in an interview after the show.

The seasoned rapper was humbled by all the UCSB students that came out that night.

“I find [the student attendance] truly a blessing. Most of the people that listened to us in the beginning have family now, so they can’t come out to shows. But, I mean, the people in the crowd were born when we first started putting shit out and I truly thank them for supporting us,” Zumbi said.

Zumbi ended the conversation with advice for the younger generation.

“Read between the lines and follow your heart. Like my grandpa told me, ‘always make plans for yourself or someone will make it for you.’” And with that wisdom, the Velvet Jones garnered another bit of priceless history.