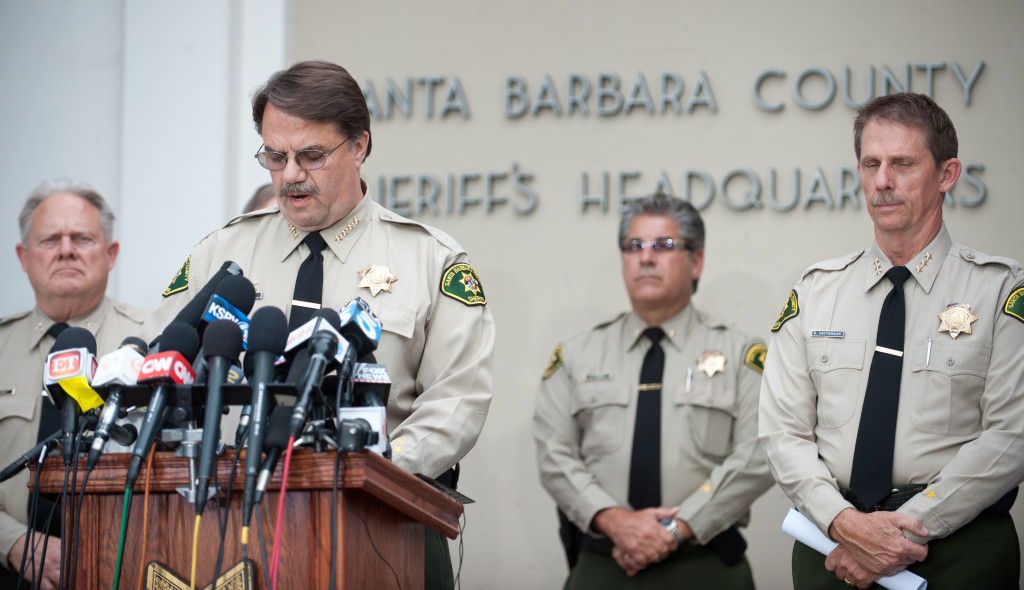 On Thursday, the Santa Barbara County Sheriff’s office released its final investigative summary report on the Isla Vista mass murder that left six UCSB students dead and another 14 injured on May 23, 2014.

The release of the report marks the end of the investigation into the events of last Spring’s mass shooting. The report describes the events leading up to Santa Barbara City College (SBCC) student Elliot Oliver Robertson Rodger’s shooting spree, including his history of mental illness, the level of preparation Rodger took to plan the attacks in the preceding months and step-by-step details of how the tragedy unfolded. The report aims to provide answers as to why the events occurred and insight into what can be done to prevent similar crimes from happening in the future. 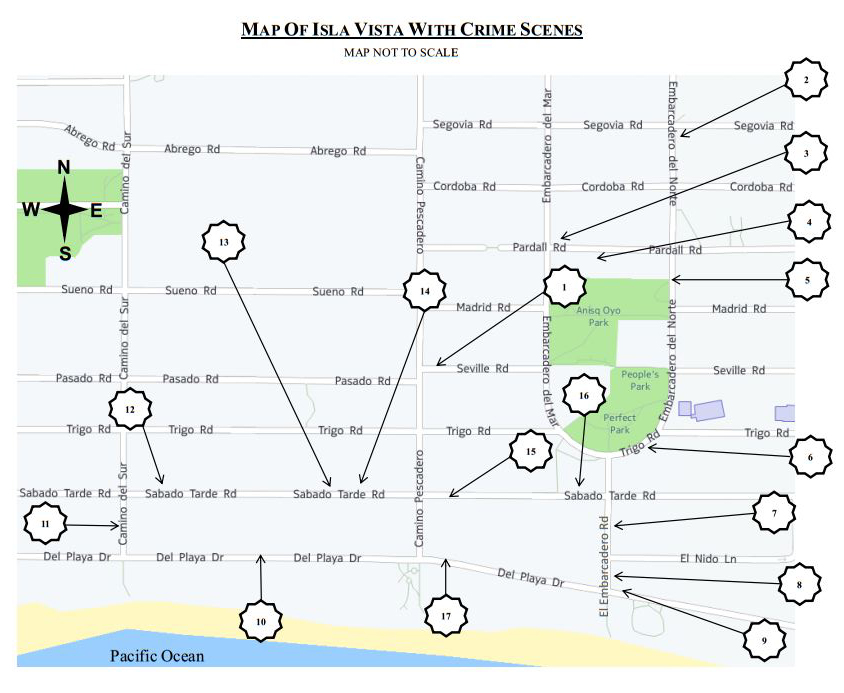 A map, released with the report, detailed the order and locations of May 23rd’s incidents. Image Courtesy of Santa Barbara County Sheriff’s Office.

Rodger emailed his 137 page autobiographical manifesto to 34 people, including his therapist, professors, parents and acquaintances, about 10 minutes before beginning his rampage at around 9:27pm on the night of May 23.

According to the report, the first known video surveillance of Rodger on the night of May 23, 2014 was recorded when he bought a drink at the Starbucks on Embarcadero Del Norte at 7:38 p.m. At approximately 9:30 p.m., Rodger was heard banging on the door of Alpha Phi Sorority house further down on Embarcadero Del Norte. Alpha Phi sorority house resident and UCSB student Megan Gibson said she heard the aggressive knocking at the front door “for approximately three minutes” but did not let Rodger in.

After not being granted entry, Rodger then shot first-year Veronika Weiss, fourth-year Katherine Cooper and fourth-year Bianca DeKock on the sidewalk across the street, killing Weiss and Cooper and seriously injuring DeKock.

According to the report, 19-year-old SBCC student Kyle Sullivan was walking east on Cordoba Road toward Embarcadero Del Norte when he heard the gunfire and females screaming. Running to the women, he noticed an injured DeKock conscious and calling her mother on the phone. Sullivan and other individuals ran to SB County Sheriff’s Deputy Patrick Genovese at Freebirds, and the deputies and civilians then ran to the females suffering gunshot wounds.

Noticing DeKock was talking to her mother on her cell phone, Sullivan continued to comfort DeKock and lay down next to her. While Genovese was busy communicating on his radio and holding DeKock’s wounds, Sullivan was able to communicate with DeKock’s mother and reassure her that her daughter was going to survive.

The report states that several civilians were standing around and asked Genovese how they could help, to which the deputy told them to check for a pulse and start chest compressions, which they did. UCSB Police Department Sergeant Dan Wilson, Corporal Greg Pierce, Officer Brad Prows and Sheriff’s Deputy William Coffman arrived to assist Genovese with the victims, and a civilian identified as Maxwell Potter approached the scene and used his sweatshirt to apply pressure to one of Cooper’s gunshot wounds.

Afterward, Rodger drove around Segovia Road and Embarcadero Del Mar until he reached Pardall Road and fired several gunshots while driving toward I.V. Deli Mart, fatally wounding undeclared second-year Christopher Michaels-Martinez, who was in the doorway of I.V. Deli at the time. 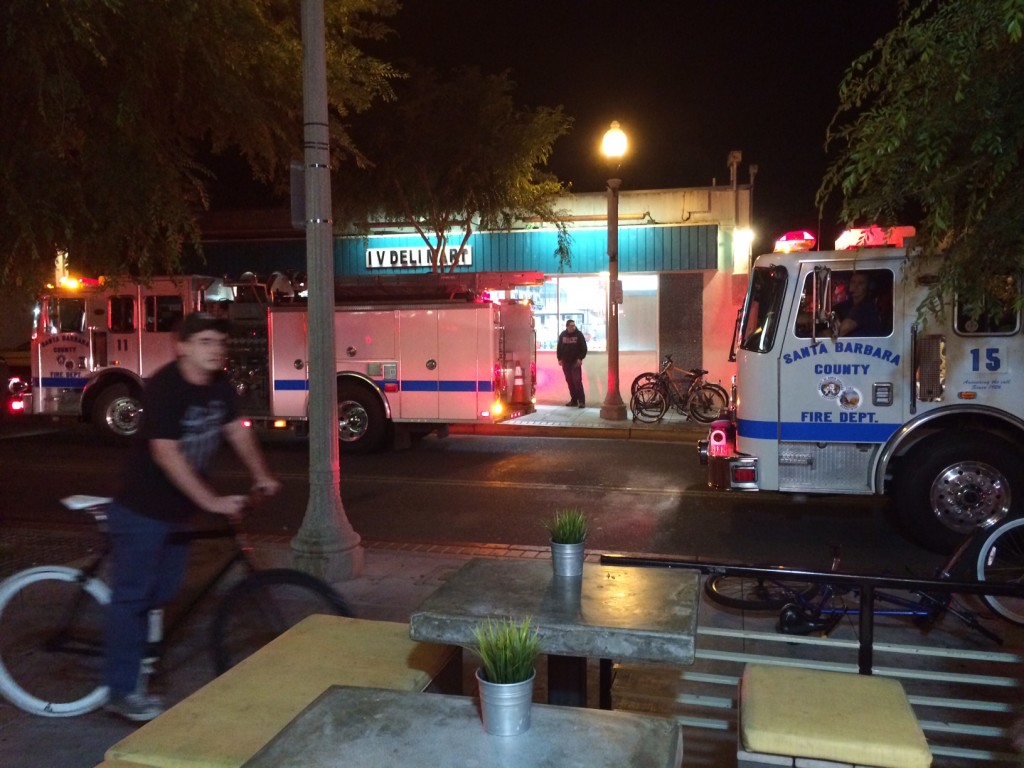 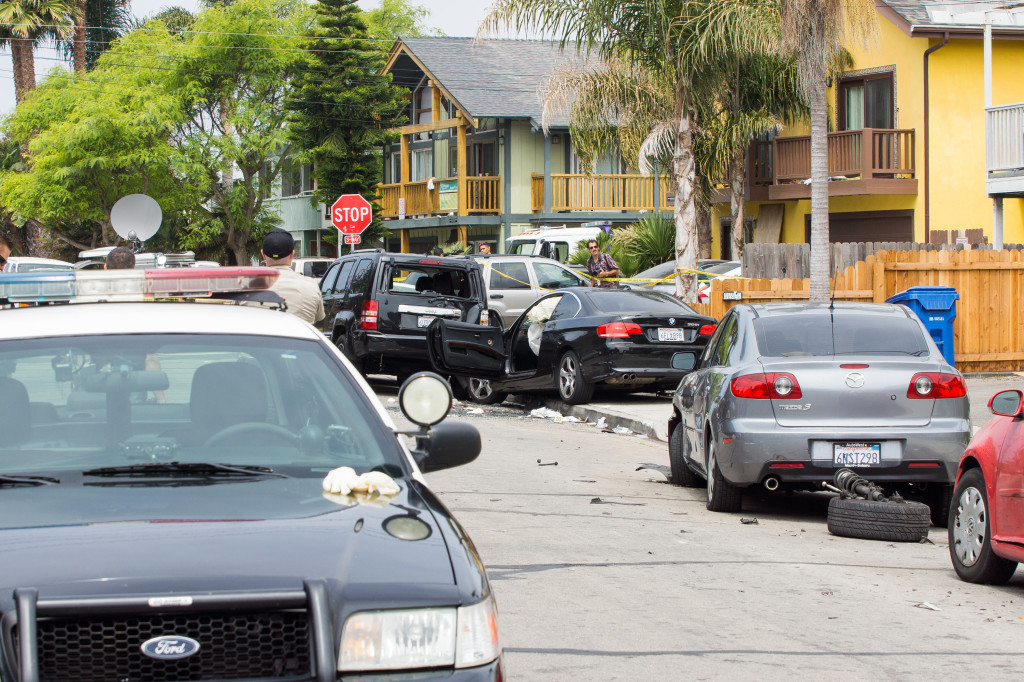 UCSB students Matthew Smith and Antoine Cherchian both survived multiple gunshot wounds on 6573 Sabado Tarde. At Little Acorn Park, the perpetrator drove onto Sabado Tarde after exchanging gunfire with Sherrif’s Deputy Christopher Johnson, Sgt. Welch, Detective Flick and Deputy Walker at Little Acorn Park. All officers were shot at several times with no injuries, according to the report.

Turning onto El Embarcadero toward Del Playa and at 9:35 p.m, Rodger’s vehicle crashed at Del Playa and Camino Pescadero. An investigation of the car saw that Roger was down, and the cause was later confirmed as a self-inflicted gunshot wound to the right side of the head.

UCSB student Keith Cheung was later found, briefly arrested, then un-handcuffed after officers realized Cheung had been struck by the perpetrator’s vehicle and was not a suspected collaborator. Cheung survived the collision.

Evidence suggests the suspect attacked and murdered Wang, Hong and Chen separately, and in that order, and then made attempts to hide the bodies, the report states.

“[Wang’s] body was partially covered by a blanket, towel and clothing, as if the suspect had attempted to conceal him from the view of anyone entering the bedroom,” the report states. “The murders of Wang, Hong and Chen are consistent with the suspect’s manifesto. The suspect wrote about his plan to lure victims into his apartment, which he would use as a ‘torture and killing chamber.’”

According to the report, Rodger had an extensive internet search history that indicates a particular interest in luxury automobiles, celebrities, Nazis and techniques for killing in various ways with a knife, with other search terms including “Adolf Hitler and the law of attraction,” “Nazi curbstomp” and “Holocaust of black people,” according to the report.

“The suspect’s in-depth research included information about Joseph Goebbels and Heinrich Himmler, two infamous members of the Nazi hierarchy,” the report states. “Himmler’s date of death was May 23rd; however, this fact appears to be purely coincidental.”

Among the items found in Rodger’s room were two knives and a machete, a sledgehammer, two gun cleaning kits, a drawing of someone being stabbed with knives, pharmacy paperwork for medications and the suspect’s printed 137-page manifesto and handwritten journal. Two knives and 55 shell cases, along with 548 rounds of live ammunition were recovered from Rodger’s vehicle during the investigation. Autopsy reports detail Rodger had taken benzodiazepines and alprazolam, anti-anxiety medications, earlier that day.

The report discloses Rodger had received treatment beginning in his adolescence and up until his death. He was diagnosed with Pervasive Development Disorder – Not Otherwise Specified, an autism-spectrum disorder featuring significant challenges in social development. When asked in 2013 how he managed his anger over his peers, “living a better life than him,” the report states Rodger replied that he “just holds it all in.”

According to the report, Rodger moved to Isla Vista on June 4, 2011 to “gain independence and improve his social skills with peers.” He enrolled in SBCC and lived in multiple apartments with various roommates that he did not previously know.

“Despite the move to Isla Vista, the suspect continued to have difficulty interacting with his peers,” the report states. “The suspect became increasingly angry over his self-perceived rejection by females. … One of the suspect’s primary difficulties was meeting people and initiating conversation. He was especially upset that he remained a virgin.”

Despite the move, Rodger continued to receive treatment for his mental health issues.

“While living in Isla Vista, the suspect received services from three social counselors through a Santa Barbara-based agency,” the report states. “The suspect’s goal was to integrate with the Isla Vista/college culture, which he defined as having a girlfriend and being accepted by the community where he lived.”

Rodger emailed his 137 page autobiographical manifesto to 34 people, including his therapist, professors, parents and acquaintances, about 10 minutes before beginning his rampage at around 9:27 p.m. on the night of May 23.

“This is it,” a journal entry from May 23 reads. “In one hour I will have my revenge on this cruel world. I HATE YOU ALLLL! DIE”.

The suspect’s bed sheets had numerous slash and stab marks on the corner, which authorities state reveal that Rodger rehearsed his attacks prior to killing his victims.

“Several areas of this blue-colored fitted sheet contained dried blood consistent with drops and smears. Several pillows on the bed also had numerous stab marks in the pillow cases,” the report states, “The presence of this damage suggests that the suspect may have been practicing his stabbing/slashing movements in order to rehearse and prepare himself for the attacks against his victims.”

According to the report, Rodger’s previous interactions with law enforcement included Rodger reporting damage to his vehicle, a fight in a house on Del Playa Drive, a citizen’s arrest of Rodger’s roommate Hong for the alleged theft of $22 worth of candles and a confrontation with a couple at Goleta Beach, which occurred in early May 2014.

According to the report, Rodger acted alone when planning and committing his “heinous crimes,” and the investigation will not be referred to the District Attorney of Santa Barbara County for criminal prosecution because the suspect is deceased. The report marks the end of the investigation.

State Senator for Santa Barbara Hannah-Beth Jackson said the I.V. community needs to focus on providing aid “with compassion and without stigma” for individuals with mental illnesses.

“We should be encouraging people to seek treatment,” Jackson said. “You have mental illness to add to the easy access to firearms, and a society that has sadly allowed violence to become glorified, whether it’s in video games, or websites or places where people can go and feed off of that anger and hostility.”

According to the report, Rodger moved to Isla Vista on June 4, 2011 to “gain independence and improve his social skills with peers.” 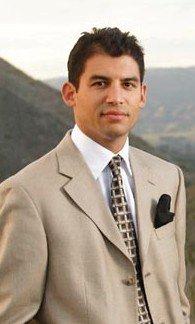 Santa Barbara Assemblyman Das Williams said the fact that Rodger viewed I.V. as a “lawless” community cannot be “glossed over.”

According to Williams, the tragedy has caused discontent among I.V. and Santa Barbara County residents regarding the “defeatist attitude” with how problems I.V. are addressed.

“I think it’s a large reason why people are pushing for AB 3 to create a community services district in Isla Vista,” Williams said. “The most important one would be the ability to contract for additional public safety services, including such things as community service officers.”

According to Associated Students External Vice President of Local Affairs (EVPLA) Cameron Schunk, legislation proposed as a result of the events that unfolded on May 23 is one way to prevent similar crimes from occurring in the future.

Schunk said one specific piece of legislation created in wake of the tragedy is Williams’ Assembly Bill 1014, which allows law enforcement officers and family members to request restraining orders against persons believed to be a threat to themselves or other, barring possession or purchase of firearms for 21 days, after which a court hearing determining the issuing of a one-year gun restraining order should be held.

“We were deeply negatively affected by lax gun ownership regulations,” Schunk said. “I think we can all agree that Elliot Rodger should not have had access to firearms. However, it’s clear that not only did he have access, it was relatively easy for him to get access. … As a community we have to move forward from it. But these pieces of legislation empower us to do that.”

Schunk said he thinks that if I.V. were a “completely different community … that there would have been less of an appeal” for Rodger to have come to committed the May 23 killings.

“There was a purpose in coming here specifically,” Schunk said. “He saw this place as an opportunity to live that archetypal wild college lifestyle. Sometimes at the end of the day I question if that is the image we want to portray.”

The entire 64-page report from the Sheriff’s office can be read here.

I kept the receipt from 8:53 at the ice cream store around the corner from where I parked, which was down the short street from his apartment, so I might’ve walked right by him as he was sending the last stuff online from his car. Then I walked down Embarcadero, through the “U”, past the 7-11, through Pardall– stopping a minute or two in front of the Deli, to see if there was any snacks I wanted (didn’t), then getting back to my car. I completely missed the whole thing by minutes. The first thing I would later realize was… Read more »