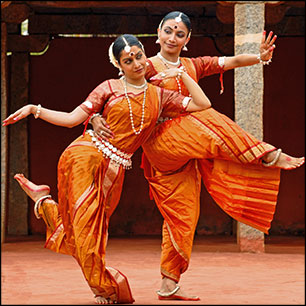 The devastation in Surupa Sen’s face as she danced Khandita was so genuine that Lord Krishna became a palpable onstage presence. Beautifully garbed in white and gold, Sen danced as Rädhä, the lover and direct counterpart of Lord Krishna, when she discovers his infidelity. She gracefully chastises Krishna and denies him the affection he seeks from her to the harmonious music of a violin and bamboo flute. Though the intricate mudras, or symbolic gestures, of Sen’s hands told a more precise tale, to the audience in Campbell Hall on Jan. 29, the story was communicated through her expressive face. An English translation of the original Sanskrit poem preceded all dances of the evening, allowing the audience to experience the detailed versions of the stories without needing to understand the mudras.

When asked to express their feelings about the show at intermission, second-year dance majors Rachel Epling and Mary Forbes positively gleamed in admiration of the dancers’ skills.

“It’s so inspiring, I’m really enjoying it, all the geometric shapes … the articulation of their rib cages … and the slight vibration thing! It’s so amazing!”

It was difficult not to feel the same level of excitement as this enthusiastic pair while watching the gaze of the dancers flick back and forth between their hands and each other with playful intent. This was particularly noticeable in the performance of Śrīmatī, performed by Sen’s fellow dancers Bijayini Satpathy and Pavithra Reddy. According to the introduction of the piece, Śrīmatī “tells the story of the journey of a woman from youth to adulthood.”

Sen, Satpahty and Reddy are part of Nrityagram’s repertory company. Nrityagram is a dance village dedicated to the preservation of India’s classical dance styles, especially Odissi.

Odissi positions are based upon 2,000-year-old sculptures in the Temples of Orissa, and Odissi dances imitate the sculptures coming to life. The feminine “S” curves that define Odissi are singular to this style of classical Indian dance and are created both in the vertical body, using the dancer’s knees, chest and head to create curves, and in the path of the dance, seen in the curvaceous manner Odissi dancers walk, creating “S” patterns on the floor with their steps.

The beauty of such a walk was not lost on UCSB’s dance students, among them Katie Winans, who had the opportunity to take master classes from the Nrityagram company. In these classes, the students learned basic techniques including the Odissi walk. Winans expressed her admiration for Satpathy, who led the classes, since teaching a dance style so foreign to UCSB cannot have been without challenges.

“[Odissi is] such an in-depth technique; it’s a dance form they’ve been doing their entire life … [but] it’s so fun [to take the class] because even just learning the basics gives you a sense of what it’s about,” Winans said.

Odissi today is only a 75-year-old recreation of the ancient style, and much of it is based in the Natya Shastra, almost analogous to a dictionary of the language of the body. Indian dancers learn the book by heart in the form of sung verse to gain a grasp of the vocabulary from which their choreography can communicate.

Sen, Satpathy and Reddy danced as a trio both to open and close the evening’s program, first in a dance about Pärvati, the lover of Shiva, and finally with an Ode to Shiva himself. Though sensuous and poised at all times like the statues they embody, the agility of the dancer’s feet, heard and accentuated via the bells around their ankles, was as incredible as percussionist Sibasankar Satapathy’s ability to keep up with the speed of the beat.

The dancers also took to the air at times, most notably in Dhīra Samīré, performed by Sen and Satpathy, when their orange and red costumes seemed like dancing flames as they flew past each other only to calmly land in perfect stillness, a tribute to the intense training the dancers of Nrityagram undergo. Shows of such physical prowess and control dispel any doubts that the Nrityagram dancers were worthy of anything less than the standing ovation they received upon the close of the program.

For more information about Nrityagram, the village, the dancers and Odissi, visit nrityagram.org