The Daily Nexus
Sports
UCSB Faces BYU in Series Finale
February 16, 2015 at 5:31 am by Sarah Stigers 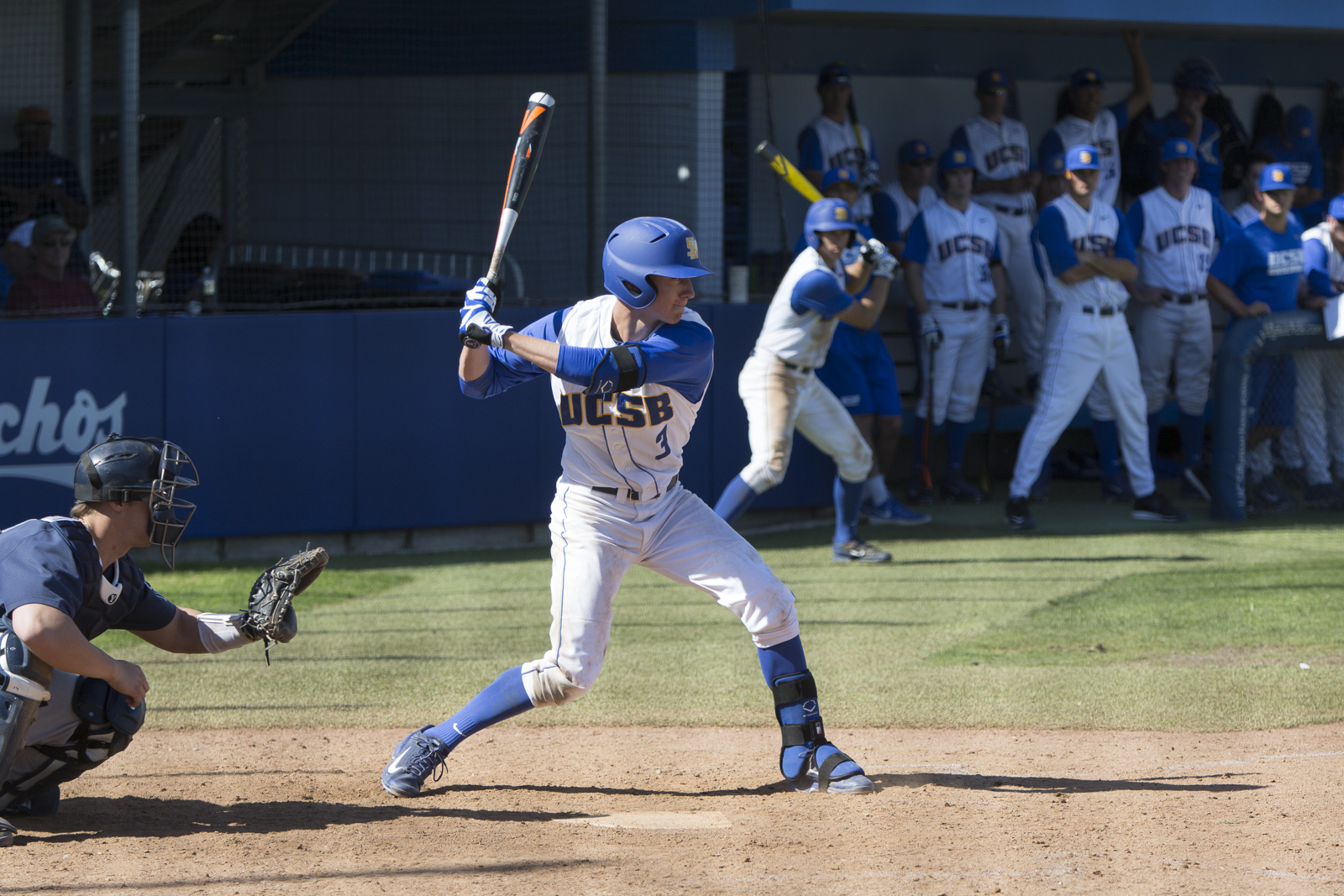 Clay Fisher prepares to swing at a pitch from BYU. Dustin Harris/Daily Nexus

With a 3-1 win over BYU in the second game of a Saturday doubleheader, the UCSB baseball team ends the weekend undefeated with one more game to go today in the season opening, four-game series against the Cougars.

With an 8-1 win on Friday, following a 6-0 win in Saturday’s first game, the team starts its preseason with a 3-0 overall record, as the Cougars enter today’s game 0-3.

“One of the worries was that we were going to trail off confidence wise, and staying on each pitch,” redshirt sophomore outfielder Andrew Calica said. “But I think we did a good job picking ourselves up as we started to slip off.”

In Saturday’s late game, both sides played a tight five innings as the Gauchos went to bat in the bottom of the sixth tied 1-1 with the Cougars. After a walk, and a base hit by senior catcher Campbell Wear, a hit by pitch loaded the bases. An RBI base hit by Calica brought home Campbell as the go-ahead run. The Gauchos’ second run scored that inning went down as an unearned run on a BYU passed ball.

“I felt like it was a good time to sit back on a pitch that I could handle well. It’s awesome to see that we had some good team at bats earlier that inning,” Calica said. “Good things happen when you get lead off guys on.”

“It was a weird situation going in with a double-header, but I went in there trying to treat it as a normal start,” Bieber said. “I tried to get comfortable with my pitches as I went on, and I ended up getting more and more comfortable with each inning.”

“Tate’s usually our closer, but he really did a good job,” Checketts said. “He was really in control of that game. He had a great start and was dominant for those innings.”

At the plate, UCSB’s lineup swung for twelve hits and six runs scored. Junior designated hitter Robby Nesovic recorded two of the teams four total RBIs, with three hits and one run scored. Redshirt senior second baseman Woody Woodward and senior catcher Campbell Wear made up the other two RBIs with one a piece.

“We were good early, but they’ve given us a lot [of runs] defensively. Even today, they gave us one on a pass ball,” Checketts said. “We’re going to have to earn more of our runs, than have them give them to us.”

In Friday’s season opener, the Gauchos kicked off their winning weekend in front of a crowd of 411 attendants. UCSB allowed twelve hits turning into only one run for the Cougars, as the Gauchos capitalized for eight runs on 10 hits from across the lineup.

The teams had Sunday off after Saturday’s double-header to prepare for today’s game. With the threat of going home empty handed in its first series, BYU must improve on its four errors made in the past three games.

“I’m sure the guys will come out and run around on their own to make sure that they’re ready,” Checketts said. “The big thing is it Domenic Mazza will be able to throw for us. That’s a big question, is if he’s ready to go.”

The teams will play today at 1 p.m. at Caesar Uyesaka Stadium for the last game of the series.