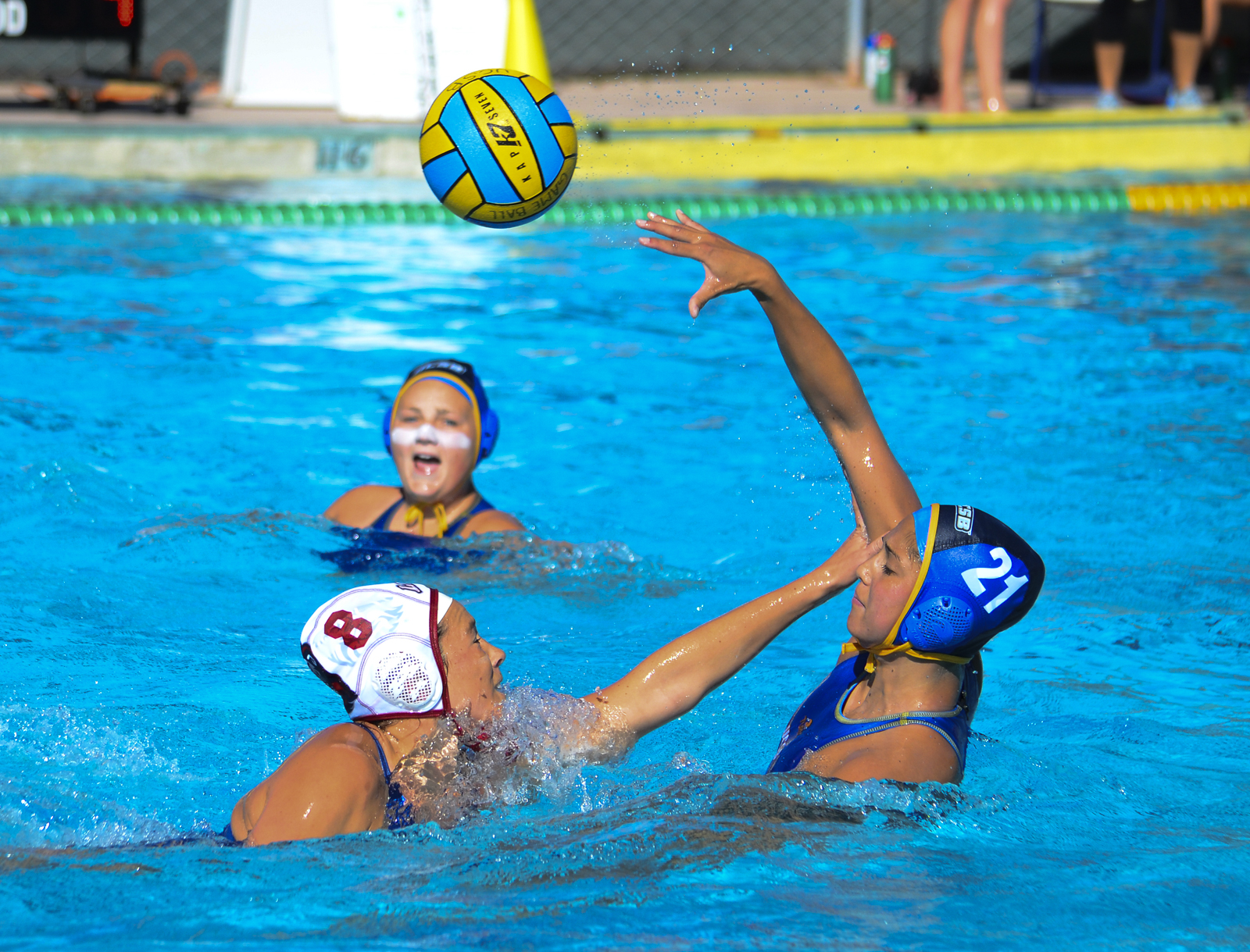 Samantha Murphy passes the ball to a teammate over the head of a blocker. Christina DeMarzo/Daily Nexus

Inconsistencies in establishing strong starts continue to plague the No. 17 UCSB women’s water polo team. After a commanding 19-7 victory over Concordia to start the Fresno Pacific Tournament, the Gauchos suffered another heart-breaking loss to No. 12 San Diego State, losing 7-6.

The split of games extends UCSB’s overall record to 7-7.

In spite of the Gauchos’ ongoing struggles of gaining momentum early, Santa Barbara had no trouble putting up points early against Concordia University.

The inexperience of Concordia freshman goalkeeper Madelynn Knust was advantageous for the Gauchos’ offensive attack. It was a shooting clinic for the team as ten different players scored at least one goal during Saturday’s contest.

UCSB took complete control in the second and third periods of the game, scoring a total of 14 goals.

Junior utility Samantha Murphy had a remarkable day, leading the Gauchos in scoring with five goals. Her hot hand helped maintain UCSB’s lead heading into and out of halftime as she scored two goals in both the second and third periods.

Sophomore utility Tayla Walsh and senior attacker Meg Dix were the only two players to put points on the scoreboard for Concordia. Walsh scored four goals in which three occurred in the third period as the Eagles tried to cut down their deficit.

Dix scored a total of three goals, but her team’s effort was not enough. UCSB had an answer for every move that Concordia made, handing the Eagles their sixth loss of the season and remain winless.

The anticipated rematch between UCSB and San Diego State was the perfect sequel to the Gauchos’ near comeback to the Aztecs in last week’s Triton Invitational.

San Diego State’s relentless offensive approach to start the game allowed it to earn a 3-0 lead in the first period. After being held scoreless, UCSB’s two goals in the second period shortened the Aztecs lead to 3-2.

After scoring a total of three goals in the first half, Benekou’s stellar play continued as she scored two more goals. Her goal with 5:14 left in the fourth period secured the Aztecs win, improving their overall record to 5-3.

UCSB’s two goals with 41 seconds left in the fourth period trimmed SDSU’s lead to 7-6, but it was too late as the Gauchos’ lost their second meeting with the Aztecs.

UCSB will make its last road trip before returning home next weekend playing in the UC Irvine Invitational; times are to be announced.