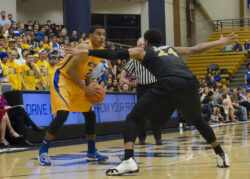 “We were flat out tougher, we just played harder, we were the more physical team,” Vincent said. “Mike had a big game, that definitely helped, Mitch had a big game rebounding. We really controlled [Long Beach’s senior guard Mike Caffey] this game.”

UCSB improves to 5-4 in Big West play and 12-11 overall while the 49ers drop to 7-3 in conference and 13-13 overall. The win avenges an ugly loss to CSULB suffered earlier on the year.

“I thought our toughness was pretty evident on how we went at the rim and we attacked, and I thought it was also really evident on the defensive end,” Head Coach Bob Williams said. “We were physical and I thought it’s probably our best defensive effort that we’ve had this year in terms of start to finish, and our commitment to defending.”

Santa Barbara traded buckets with the 49ers coming out of halftime and not until nine minutes in did they start taking control of the game. Vincent found sophomore guard Eric Childress open on the left side of the perimeter, who preceded to drain the shot to put the Gauchos seven points ahead. Childress returned the favor on the next possession with an assist to Vincent that gave UCSB a 10-point advantage.

Despite Long Beach’s best player in Caffey limited to only two points in the first half, he put the team on his back down the stretch as Long Beach went on a 7-0 run to cut UCSB’s lead to three with less than five minutes remaining; five of the points came from Caffey.

UCSB did not relent and answered back emphatically. Having already scored six straight points, the Gauchos put the nail in the coffin with a dagger from senior guard Zalmico Harmon, a three pointer that put Santa Barbara up by 10 with 2:12 left and that sealed the win.

“We were waiting for them to make a run. With a player like Caffey it’s a matter of time before he starts making some shots,” Vincent said. “… We came back and started hitting some shots so it didn’t hurt us as much. They went on their little run and then we went back on ours.”

In Big Al’s absence, Bryson has emerged as the main offensive weapon for the Gauchos; this is the fourth time he’s led the Gauchos in scoring with Big Al out.

Brewe delivered an all-around performance despite scoring only nine points and grabbing seven rebounds. His toughness setting screens and being physical played an important part in the Gauchos’ scheme.

“For the most part, I think I did a pretty good job clearing space on the defensive and offensive glass,” Brewe said.

Santa Barbara now travels south to face a very athletic squad in Cal State Northridge. CSUN came away with a surprising win over the Gauchos the last time the two faced off in UCSB’s conference home opener.

Throughout that game CSUN was red hot from the field and got an unlikely offensive contribution from senior forward Devonte Elliott. Elliott finished the game with a season-high 23 points on 8-12 shooting from the field and a perfect 6-6 from the charity stripe.

Senior guard/forward Stephan Hicks, CSUN’s leading scorer on the year, and senior forward Stephen Maxwell, are threats on offense and rebounding, respectively. Although the team has not played up to its capability, sporting a 2-9 league record and 6-20 overall, the team is very dangerous considering it has already beaten the Gauchos once this year.

“I think they have a better physical team than they did a year ago,” coach Williams said. “I think we’re in for a really crucial important game for us, to kind of get going what we want to get going in this second half of league.”

Tip-off against the Matadors is set for Saturday at 7 p.m. in Northridge.