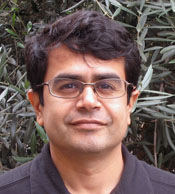 Chemical engineering professor Samir Mitragotri was elected to the National Academy of Engineering (NAE) last week, a professional distinction that honors individuals who have made outstanding contributions to engineering research, practice or education.

One of 67 newly elected members this year and the only faculty member from UCSB, Mitragotri was honored for his work with transdermal drug delivery systems done in part with the Mitragotri group, which he runs in the department of Chemical Engineering. The distinction joins his other honors of being elected to the National Academy of Inventors in 2013 and as a Fellow of the American Association for the Advancement of Science in 2012.

Mitragotri said he won academy membership because of the advancements he and his research group made in treating patients through medicinal patches on the skin instead of injection with needles.

“[NAE membership is] really a sort of validation and a culmination of the value of the work that we have been doing,” Mitragotri said. “It’s an encouragement to continue on the same path.”

According to Chancellor Henry T. Yang, Mitragotri is well-deserving of the prestigious election.

“Election to the Academy by one’s peers is one of the highest recognitions for an engineer, an acknowledgment of outstanding and pioneering research,” Yang said. “This distinction joins a long list of Samir’s other well-deserved honors and accomplishments.”

Mitragotri said he believes a large part of his recognition is due to the students and research group members who work with him.

“I really want to thank my students and my research group,” Mitragotri said. “They are the ones who do the hard work on a day-to-day basis, and the work that is recognized is really their doing.”

With his membership, Mitragotri said he looks forward to conferring with other engineers on making decisions for the future of the engineering field.

“It’s really an opportunity to participate in the future discussions of engineering at the national level,” Mitragotri said, “That could really be the key benefit and the key outcome of this election.”

“It doesn’t surprise me in the slightest, but it makes me very excited,” Sawaya said. “This appointment is simply an indication of the excellent faculty and students … and a reason we have one of the top chemical engineering departments in the country.”

“Really, it’s representative of UCSB science as a whole,” Sawaya said. “We are a top science university.”