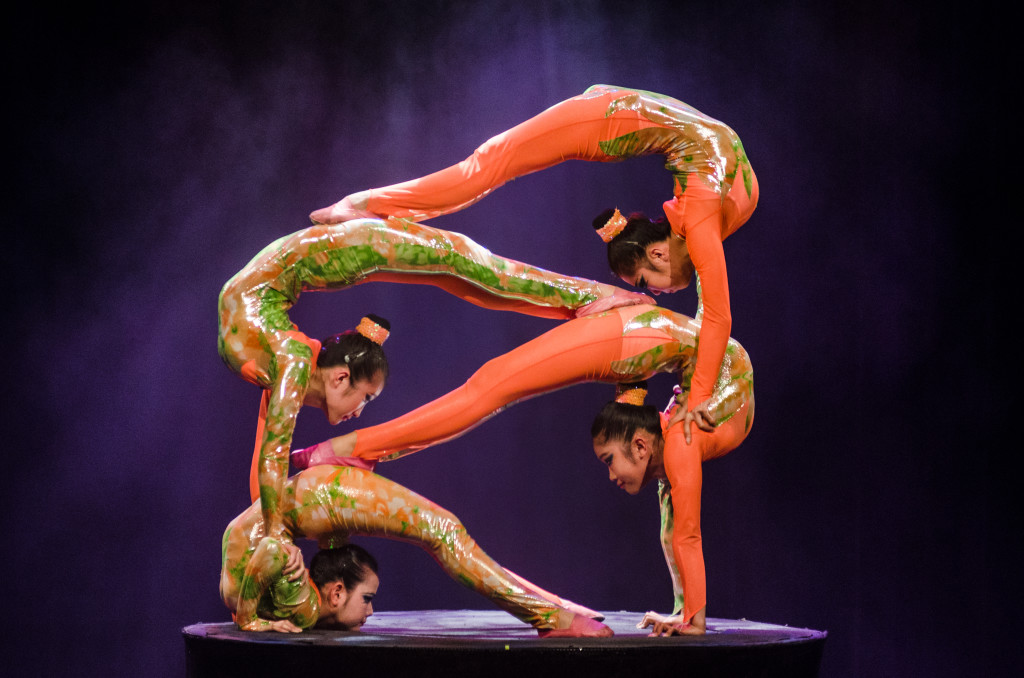 One might feel a sense of shame blended with awe when witnessing the Golden Dragon Acrobats contort, bend and balance so seamlessly. The Chinese acrobatic company performed their critically-acclaimed Cirque Ziva show in Campbell Hall on Jan. 24 to an audience of hyperactive children and restless parents.

Since 1985, the production has continuously stunned audiences with its sophisticated set design and jaw-dropping stunts. Audience members frequently clasped their fingers to their parted mouths as an indication of disbelief and shock. The performance glorified strength and grace, demonstrating the extreme physical capabilities of the human body.

In one segment, the performer balanced a mini glass structure atop her face, hands and feet as she nimbly knotted her body into inconceivable positions. As if the audience wasn’t already bewildered enough, she concluded her portion of the show by revealing that the mini glass structure consisted of smaller separate glasses brimming with water. Not a single drop spilled as the performer defeated the limits of human flexibility and balance. Did I mention she also elegantly breakdanced while upholding the fragile object?

Clad in glittery bodysuits and accessorized by plastic beads, the troupe dazzled the dark stage with costumes that honored Chinese culture. Those fortunate enough to sit near the stage were likely to hear the faint rattles of the elaborate costumes. The addition of this auditory perk encompassed another interesting dimension of reality and wonder.

The stunts grew increasingly dangerous with each round of applause and gasps. There was always the addition of another metal hoop for acrobats to fly through or the switch to a trickier and larger prop to spin. The troupe certainly played on the audience’s fear of height.

Another segment of the show involved a single acrobat stacking wooden chairs atop each another. With each addition of a chair, he boldly ascended and completed a handstand. Soon enough the chairs piled high until the acrobat stood on his hands while his feet grazed the ceiling of Campbell Hall. He occasionally shook the tower of chairs to either test its sturdiness or tease the audience, a question better left unanswered.

Cirque Ziva accomplished many more death-defying stunts that illuminated the art of symmetry. A common stunt included a band of acrobats gathering to climb atop one another in a flawless attempt to assemble various gorgeous human architectural feats. The performers demonstrated ultimate precision by balancing on top of one another with an arm, a foot and even the nape of a neck.

It’s challenging to capture and restrict the mind-bending stunts with words. Cirque Ziva is a feast for the eyes and a blessing to the curious inner-child within us.