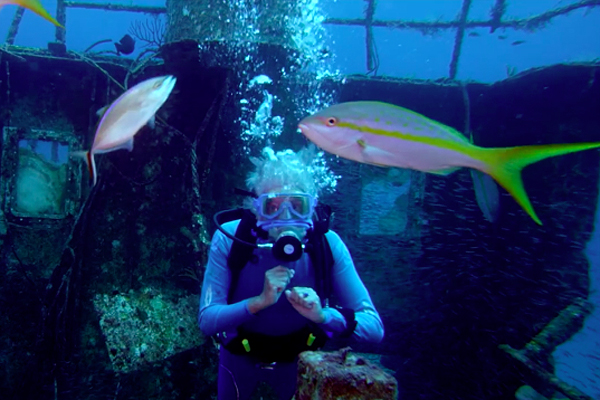 The second day of the Santa Barbara International Film Festival found the Arlington Theatre packed with many eager to meet the legendary Cousteau family. Jean-Michel Cousteau, son of ocean explorer Jacques Cousteau, and his children Fabien and Celine have dedicated their lives to the education and conservation of the Earth’s biggest natural resource. It’s no wonder they are the recipients of the 2015 Attenborough Award for Excellence in Nature Filmmaking.

Wednesday’s tribute included a screening of Jean-Michel’s first IMAX, “Secret Ocean 3D.” Though he had a clear method for presenting his message, he still encountered several difficulties in making the documentary.

“The real issue was having the right kind of equipment since we were working with prototypes,” Jean-Michel said. “But now, we can focus in slow motion on tiny things that you normally can’t see and we’re going to be able to put that on the big screen.”

The film certainly didn’t disappoint. While most documentaries cast the big fish (whales, sharks, dolphins and the like) as their stars, “Secret Ocean 3D” gives the smaller organisms their chance to shine on the big screen.

Narrated by Dr. Sylvia Earle, “Secret Ocean 3D” brings the audience up close and personal with some of the world’s most eerie and amazing creatures. Viewers, however, couldn’t appreciate these breathtaking scenes if it weren’t for the new filming tools utilized specifically for this documentary. Now, underwater shots can be made in 3D, Ultra-HD 4K, close up, macro and with motion control. “Secret Ocean 3D” takes full advantage of this technology and it certainly shows through the vibrant colors of the giant clam’s flesh, the smooth movements of the octopus, and the vivid colors of Christmas tree worms dotting the coral reefs.

Cousteau’s mission, however, is not just to inform. In uncovering the wonders of the ocean, he also hopes to show why humans must be proactive in protecting the ocean. Take plankton, for example. It’s a crucial source of food to many marine animals and produces more than half the Oxygen on Earth. So almost every breath humans take is “a gift from the ocean.” By showing the enormous impact of such tiny organisms, Cousteau demonstrates not just the important role plankton plays in the ocean food chain but also why humans need the ocean as much as the ocean needs them.

The screening was followed by a panel discussion with the Cousteau family moderated by Tim Matheson. Jean-Michel spoke fondly of his relationship with his father who strapped an Aqua-lung on his back at the age of seven and pushed him overboard into the water. That event soon spurred into family scuba diving in the Mediterranean sea, many adventures on board the ship, Calypso, and of course Jean-Michel’s legacy in ocean exploration. Even after creating countless films and publishing a best-selling autobiography about his father, My Father, My Captain, there’s one thing that continues to keep Jean-Michel excited about his commitment to saving the oceans.

“Every time I have the opportunity to look in the eyes of a child, I always say ‘I will never let you down because I want you to have the same privilege as I’ve had. And thus we need to do everything we can to protect our life support system and that’s the message I’ve been trying to pass on. Fortunately it has impacted those two there,” said Jean-Michel, gesturing to Celine and Fabien.

Celine has a different approach in ocean conservation and spoke about her work regarding the indigenous tribes of the Vale do Javari reserve in the Brazilian Amazon. Deforestation, illegal activities and oil exploitation have negatively impacted the tribes and help contribute to their enormous health crisis. But through multi-media content such as film and photography, she hopes to be able to bring awareness to such people and educate others on their changes they can make to better conserve the environment.

“For me, it’s very important to put the human being at the center of every story. That’s how you connect to a wider audience and have them understand their connection to any place, ecosystem, or issue.”

Fabien, for his part, strives to showcase ocean exploration as an adventure through a project called Mission 31. For 31 days, Fabien and his team lived in an underwater habitat, exploring the ocean at 63 feet below the surface as well as connecting such discoveries with the world.

“For the first time ever we invited the world to live at the bottom of the sea. We did Skype with classrooms and Google hangouts and were able to share a lot of the discoveries that were happening in real time. It was really important to tell the story in a more immersive way, pun intended, in a way that can have young generations dream.”

The work of the Cousteau family has expanded over three generations and though Jean-Michel, Celine and Fabien have accomplished much in their lives, there is still work to be done. Pollutants, climate change and overconsumption have negatively impacted our environment but there is still hope. And the first step in making a change is education and awareness.

“This is our life support system and why we exist,” Jean-Michel said. “If we protect the ocean, we protect ourselves.”