The Daily Nexus
On the Menu
Greece Without Grease: Santorini Island Grill
February 5, 2015 at 5:01 am by Nura Gabbara

I’m a huge fan of Greek and Mediterranean food, so naturally when I heard about Santorini Island Grill’s grand opening in the University Center, I had to check it out. According to the Santorini Island Grill website, the owners of the chain, Takis and Eleni Vartelas, were vacationing in Santorini, Greece when they were inspired to open up a Greek restaurant in the United States. The couple discovered delicious family-owned restaurants offering a variety of “grilled items marinated and cooked in a way that was practically unknown to the Greek mainland. The food was cooked fresh, served fast, tasted great and was reasonably priced.”

On a Thursday evening, I found myself in the UCen, and my friend and I finally decided to see what this restaurant had to offer. Santorini Island Grill is located on the second floor of the UCen, replacing Dominos. I walked inside and the dining area was empty, perhaps because it was a Thursday evening. There was a chef working the kitchen and a cashier, and both provided customer service and were very friendly.

Having heard that Santorini was known for its healthy food and reasonable prices, I found myself scanning the menu to see how accurate that claim was. To be honest, the menu looked great. The prices did correlate well with the portions offered. There were many choices of Greek salads, pitas with gyros and combination plates, but not too many to overwhelm. Entrée items included gyros, falafel, chicken, and combination meals that came with two sides: Greek salad, rice, French fries or roasted veggies. I decided to order the quarter pound lemon chicken with Greek salad and rice as my sides. My meal was about $10 including a fountain drink, so the price was reasonable for what I had ordered.

After ordering, I sat down in a booth and scanned the restaurant. Inside, Santorini was very clean, orderly and had been freshly remodeled. There were booths lined along the side of the restaurant and tables in the center area. The lighting was calm, and aside from being empty (my friend and I were the only two customers in there), it was a nice experience. The colors were very island-esque, with touches of orange to enhance that Mediterranean feel. It was rather quiet though, and there was no music playing in the background. There was a small patio outside with outdoor seating to complement the restaurant. 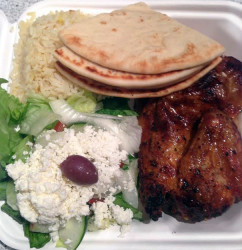 My meal took about 10 minutes to prepare because most of the items on the menu were already cooked and just had to be heated up. I was a little bit disappointed that my meal was served in a to-go box, but the presentation of the food was appealing. The portion size of the chicken was great, but the portions of the sides were small. I understand that the salad and rice were “sides,” but I enjoy hefty portions of rice and salad whenever I eat chicken. The entrée and sides also came with pita bread, tzatziki sauce and a red wine vinegar dressing for the salad.
The Greek salad was made of lettuce, tomatoes, red onions and feta cheese with an olive on top. I drizzled some of the red wine vinegar along with some of the tzatziki sauce for flavor. I took a bite, but was disappointed with the overwhelming flavor of feta cheese. It wasn’t as flavorful or as yummy as previous Greek salads I have had, but it still satisfied that Greek craving and the ingredients were fresh.

Next, I tried the pita bread, which I dipped into the tzatziki sauce. The taste was good, but the bread was cold. The rice was also okay: warm, but not fresh and hot as I would have preferred. The chicken, on the other hand, was delicious, with its spices and lemon flavoring. It had already been cooked but I watched the chef pop the chicken back onto the grill to reheat it. Although it had a high bone to meat ratio, the chicken was the best part of the meal since it was fresh off the grill.

Overall the food was good and the service was good, but I wasn’t as satisfied with my meal as I hoped to be. I was disappointed with my experience and expected more unique Greek flavors incorporated into my meal, as I am so used to eating Greek and Mediterranean food. Also, there needed to be background music to make up for the quietness of the restaurant. That being said, Santorini brings a spin to Greek cuisine with its healthy food with reasonable prices, and is a nice alternative to burgers and pizza, which I almost always find myself eating. I recommend trying Santorini out for yourself, but it’s probably a better idea to eat there for lunch rather than dinner.

Greek Food rules. That is all.