The Daily Nexus
Film & TV
A-List Celebrities Flood to the Arlington for Virtuosos Award
February 5, 2015 at 10:55 pm by Bin Nguyen 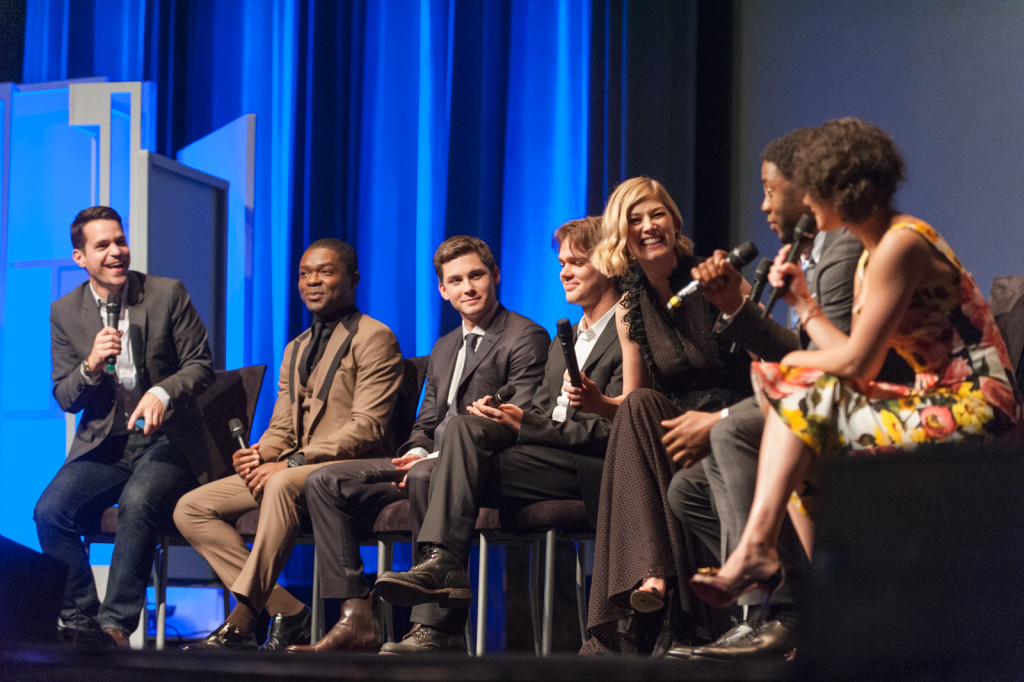 The Daily Nexus was exclusively among the journalistic press on the red carpet and spoke to every honoree before they received their grand award.

Q: Growing up, did you have similar experiences as your character, Mason in “Boyhood?”

A: Yeah, I mean a lot of them, more and less. I was homeschooled so what I was doing was kind of different, but emotionally and psychological, definitely. I was always kind of right there with Mason … that was an incredible outlet to have, everything I went through, and you’re trying to figure out so much, especially as a teenager, and [I was] able to take those things in fiction and look at them somewhat subjectively.

Q: What do you remember when you were six years old auditioning for this film?

A: I remembered it was a long audition process and Richard didn’t have the script written or anything. So it wasn’t like most auditions where you go and read lines. It’s just kind of an understanding, he was trying to get to know me … I brought in art and he talked to my parents and it was very casual.

Q: Welcome to Santa Barbara. What is your impression of the SB so far?

A: I had a great time so far. I came up early yesterday morning, we spent a day on beach, had a picnic [and I] went to La Supa Rica last night with my partner. My two sons [are] here, so we’ve just been building sand castles and playing in the waves; it’s wonderful.

Q: This role is such a revolutionary role for women in Hollywood. How does it feel to be chosen to play such a complex character?

I think the point is she is not a monster. She is just sort of [a monster], for the sake of a screenwriter having fun writing this villainous character. [But] she’s totally grounded in reality; I know exactly where she comes from. It’s just the extreme we’re not used to seeing.

Q: What was it like to shoot these scenes over and over again? I know David Fincher and he’s a perfectionist.

A: Well I am [a perfectionist] too, so we had a meeting in mind on the part. I never mind[ed] how many times I had to do it; I’d rather get it right.

Q: What was it like filming that particular scene with Neil Patrick Harris?

A: That’s the nature of David Fincher filming: his foresight, his planning was like a military operation. We’d do one scene and it [would] be a blood bath, the sides of the set would go up, and the bed would be wheeled out.

Q: How many showers did you take for the scene?

A: I’m not going to give anything away but in the near future you will see some English designers coming soon.

Q: What did you see in this role of Fletcher that first drew you in?

A: Everything that an actor is looking for in a part is telling a compelling story, and [playing] a character that I can really sink my teeth into.

Q: Playing an evil character is much more fun…

A: It can be. But I’m glad I don’t play it all the time because it’s nice to go back and forth and play different types of guys.

Q: Was it fun to slap your co-star Miles Teller repeatedly?

Q: What’s it like to play different characters and not being put in a box?

A: That’s always the goal; good writing is always a joy to do. Bad writing is hard to act and when you get boxed in doing a stereotypical character, those could be long days in the office.

Q: How does it feel to be nominated for an Oscar from a film that was made in only 20 days?

Q: Damien is only thirty years old, which is pretty young…

A: He was twenty-six when I first met him, [that’s] when his journey started.

Q: The magnitude of this film — what was it like to work with all these amazing actors?

A: I felt really lucky to be in good company and they pushed me to play as I’ve ever been before.

Q: Did they teach you anything during the process?

A: They taught me a lot about myself, my personal limits, what it’s like to break those limits and what happens on camera and in scenes. I learned a lot from them.

Q: Were there any pranks going on during the filming?

A: No, it was a pretty serious set. But it was a great experience, it really was.

A: Not that I’m aware of. I know the fans would really like it and I really want another one. They’re fun films, they are really fun to make, but I haven’t heard anything about that, so I don’t know. I think we all are getting a little old to play those characters, so I wouldn’t hold my breath necessarily.

Q: Welcome to Santa Barbara, how does it feel to be here?

A: I love Santa Barbara; I always have a good time every time I come here. It’s nice to come here and get an award.

Q: What was it like to prepare for this role, such an iconic character?

A: It was challenging but it was also incredibly rewarding. The most rewarding thing is to see people respond so beautifully to the film.

Q: I know you recently marched with Oprah this past MLK Day in Selma. How did it feel to march down the town’s incredible history?

A: It was a full circle for us because Selma still has a lot of problems. [It’s] economically deprived [and] there is still segregation down there, not officially, but practically speaking there is. Hopefully the film brings attention to the community in a way that helps it.

Chadwick Boseman (“Get on Up”):

Q: What was it like being a playwright in New York and now getting to play all these iconic characters?

Q: I hope that you do come back to theater.

A: Who says I left theater. Maybe I’ll go to New York and train with a teacher, do some workshops. All that [can] happen, you just haven’t seen it.

Q: How do you feel when people categorize your film as an “abortion romcom?”

A: Well you are the only person that has said that to me. I would say that when you see the movie, you’ll see that it is a story about one woman in our world right now. [She’s] making appropriate decisions for herself, and finding joy in that, and finding the complexities.

I understand maybe why the media would call it an abortion comedy because it seems like a buzzy phrase. [The phrase] doesn’t mean much to me. As you can see from the work we did, our film is beautiful and complex.

AND NO DIVIDING THE LAST OLYMPIAN IN TO TWO PARTS! IF THEY DO, I’M GONNA LOSE MY COOL! THIS ISN’T HARRY PLOBBER, THE HUNGOVER GAMES OR DIVERGENT SLUTBUNNY, OK FOX? DON’T SPLIT IT UP! If The Last Olympian is only one movie, then I can die a hero.