The Daily Nexus
Film & TV
Eddie Redmayne and Felicity Jones Honored with the Cinema Vanguard Award “Theory of Everything” Stars Speak to the Nexus on the Red Carpet
February 5, 2015 at 10:51 pm by Arasch Blurfrushan 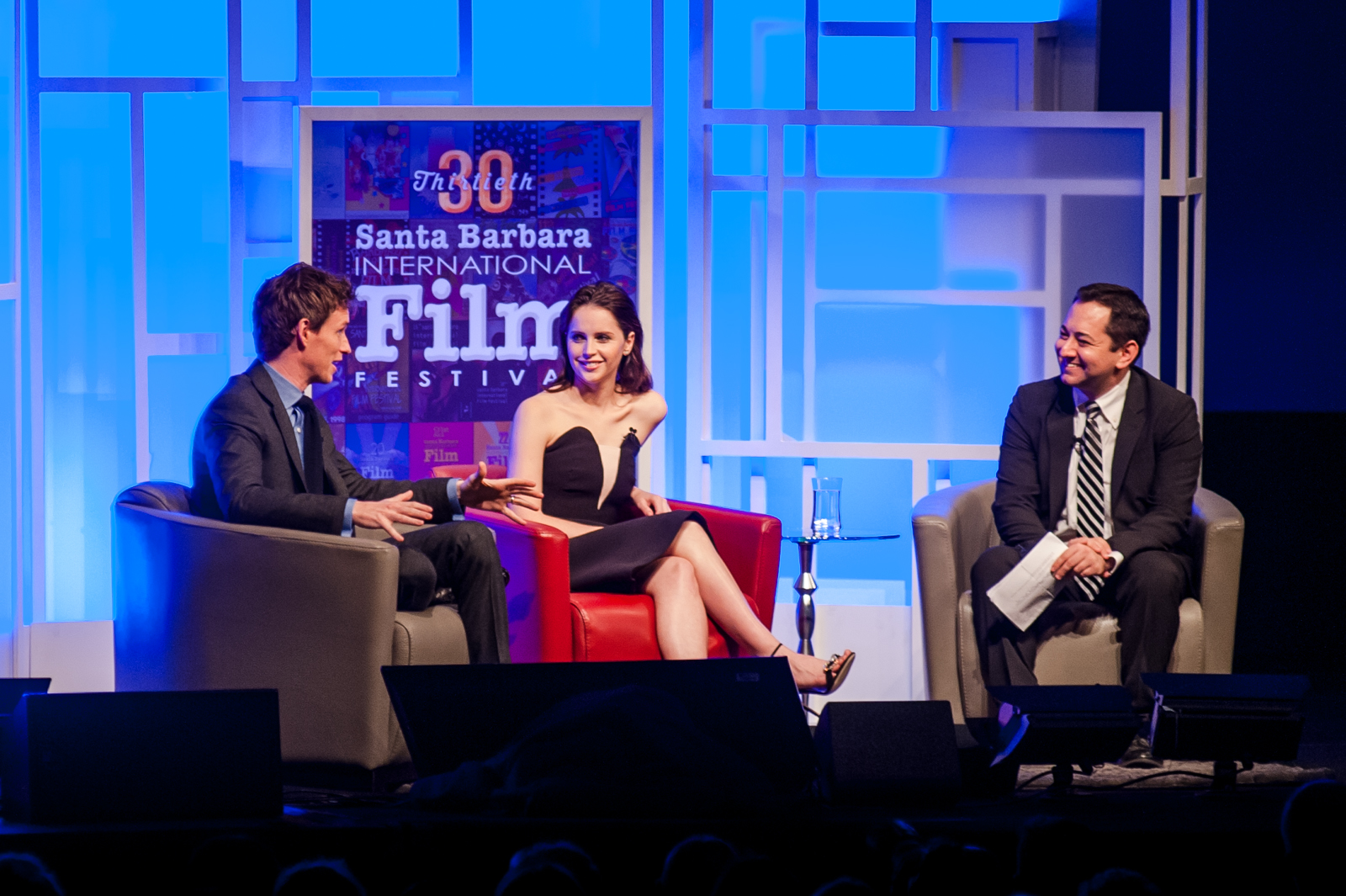 Eddie Redmayne has been on a roll lately. Nominated for over 25 awards for his leading role as Stephen Hawking in the biographical film “The Theory of Everything,” the 33-year-old British actor has already won the Golden Globe and Screen Actors’ Guild Awards for Best Actor in a drama. He’s a strong contender for a BAFTA and an Academy Award.

Felicity Jones, 31, who played Stephen Hawking’s wife, Jane Wilde Hawking, was also nominated for many awards, including all listed above. But last Thursday, Jan. 29 at the Arlington Theatre, both leads were recognized with the Cinema Vanguard Award. The SBIFF tribute celebrated their outstanding careers, particularly their acclaimed performances in “The Theory of Everything.”

The night began with a red carpet event featuring Redmayne and Jones accompanied by Anthony McCarten, screenwriter of the film. The stars met and greeted fans before walking along the line of reporters, starting with the television journalists and moving down. I waited patiently toward the end of the line, and although Redmayne ran out of time, I did get the opportunity to ask Jones one question: How did she feel about playing such an important role in giving Jane the credit she deserves for the impact she had on Stephen’s life an achievements?

“That’s the whole reason I’m here, because of that woman,” Jones said. “[Jane], in many ways, was a bit of an invisible woman, and it’s been an absolute honor, and very important, to bring her story to light. That has always been the main focus for all of us, in making the film, to shed light on this phenomenal woman.”

After the meetings with reporters, and when the photographers finished taking all the red carpet snaps they needed, the procession moved inside the theater for the main event. Roger Durling, executive director of the film festival, gave a short speech and introduced Scott Feinberg, writer for Entertainment Weekly, who moderated the evening. The Q&A was interspersed with three clips from “The Theory of Everything” as well as clips from past films starring the actors including “Savage Grace,” “My Week with Marilyn” and “Les Misérables” for Redmayne, and “The Tempest,” “Like Crazy” and “The Invisible Woman” for Jones.

Feinberg asked them many questions, starting with if they knew each other before the film. The two had met before, having auditioned for a few of the same films, none of which either of them earned, they joked.

Meeting Stephen and Jane Wilde Hawking was an honor for the pair, and they described how nervous they would get whenever one of the Hawkings visited the set during production. They also talked about the difficulties of portraying the different stages of Stephen’s ALS, which included Jones acting out the changing methods Jane would use as his disease progressed. This was especially difficult considering that scenes, for budget reasons, are not filmed in chronological order. Luckily, both Stephen and Jane loved the actors’ performances, saying it was like watching themselves.

Drawing away from “Theory,” the two elaborated on their earlier work. Redmayne described his incredibly awkward but amusing experiences playing Julianne Moore’s son in “Savage Grace,” which is about an incestuous mother-son relationship. While filming “My Week with Marilyn,” he remembered how insensitive he sometimes was about how difficult it was for Michelle Williams to play an icon like Marilyn Monroe. The insensitivity came back to haunt him during his trial and tribulations while acting as Stephen.

Jones also discussed the interesting experience she had filming “Like Crazy.” The film did not have a formal script, just a very detailed story outline around which the actors improvised all of their dialogue. She said this was a difficult but rewarding experience, and did improvisation again with the same director in “Breathe In.”

The Q&A ended with Feinberg introducing screenwriter McCarten to the stage to present the Cinema Vanguard Award. His moving and funny speech praised the stars for their talent, wit and most of all, their young age. “Their combined age is 35,” he joked. He also thanked them for their extraordinary performances that brought his screenplay to life and gave them their award, ending the beautiful night in downtown Santa Barbara.

You late a little with this.