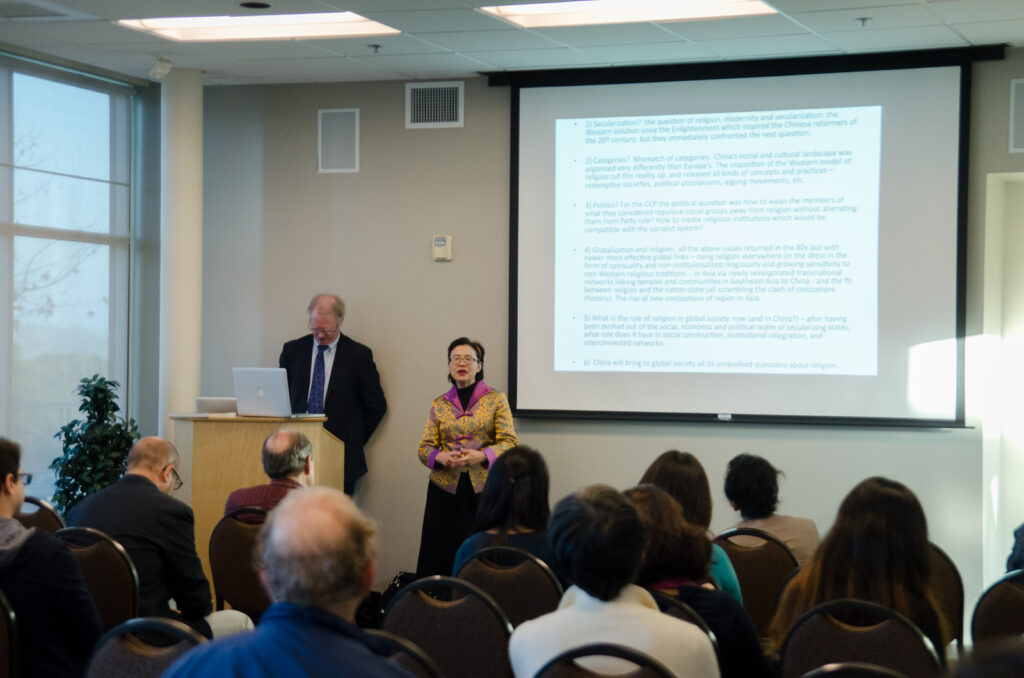 Two professors from McGill University and the Middlebury Institute of International Studies gave keynote lectures at the Mosher Alumni House to celebrate the opening of the Confucius Institute on campus yesterday.

The first lecture, “Globalizing Regions: the Spread of Southeast Chinese Daoist Ritual Traditions to Southeast Asia,” was given by East Asian Studies Professor Kenneth Dean of McGill University. Immediately following Dean, Professor of Trade & Economic Diplomacy at the Middlebury Institute and Institute for Trade and Commercial Diplomacy President Robert Rogowsky gave a lecture entitled, “U.S.-China Trade Policy: Productive Collaboration or Managed Rivalry?” Religious studies professor and Cultural Studies Director of the Confucius Institute Mayfair Yang began the meeting by giving a summary about what the opening of the Confucius Institute means for the university.

“We will emphasis academics and research more than most Confucius institutes,” Yang said, “We still will be in the business of educating the public, promoting China studies, strengthening understanding of Chinese history, culture, society, religion, philosophy, literature, economics, and politics.”

During the lecture Dean discussed the background of Southeast Asia’s cultural history presented his findings from his long-term ethnographic studies focused on Southeast China. According to Dean, ethnic communities with distinct dialects provide cultural benefits to its surrounding region.

“The dialect communities provide a lot of strength and resources for communities,” Dean said.

Afterward Rogowsky gave a lecture on the trade relationship between the U.S. and China, highlighting economic issues brought about by China’s rapid industrialization.

“The growth of the middle class in China and in particular Asia is huge,” Rogowsky said. “It’s good but is also somewhat problematic. Problematic in the sense that people in the middle class eat a lot more than people who are poor … so it increases the demand for food tremendously.”

“[There is] lots of debate on Chinese issues but there is one consensus that I think everyone would agree,” Zhang said, “that it’s worth the research about China.”

Second-year religious studies graduate student Sarah Veeck said she was interested in Dean’s analysis on the changes in the Putian plain over the last hundred years.

“There was a lot of depth. There also with the transnational connections continuing to impact local religion in China,” Veeck said. “I would be interested in dong long-term ethnographic study on a community that does rely on local temple associations to provide assistance for education, infrastructure projects, funerals for people who can’t afford them.”

Yang said Dean offered a historical perspective of Fujian that maintained a locally-oriented account of its regional impact throughout Southeast Asia.

According to Yang, the two keynote speeches illustrated the Confucius Institute’s as well as China’s “globally important” role on campus and in the world.

“It’s a dynamically changing society.” Yang said. “All these global transnational problems, you need China on board. You need to engage with China. Just because you don’t agree on a few things doesn’t mean you cannot include China because China is a dynamic society. It can help the rest of the world a great deal.”