The Daily Nexus
The Brew Review
Bomber Diary 1: Victory at Sea
February 4, 2015 at 5:00 am by Allison Wright, Peter Mounteer and David Jackson

bomb.er /’bämər/ noun, 1) an aircraft designed to carry and drop bombs; 2) a large bottle, typically 22 oz., of craft beer
di.a.ry /ˈdī(ə)rē/ noun, a book in which one keeps a record of events 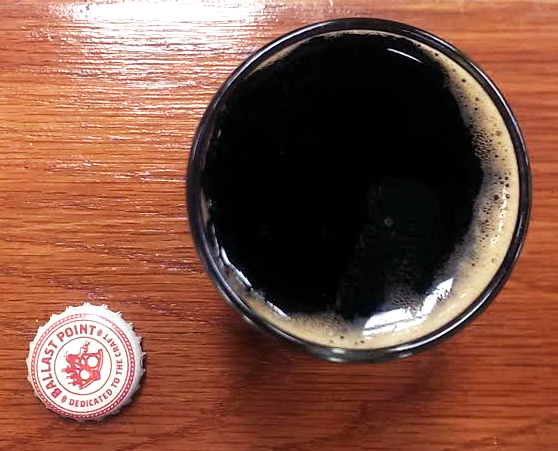 With every sip and every typed word, you are born. Welcome to existence! As your creator, allow me to explain your premise.

The local liquor store has an entire aisle lined with tall boys, with beers, six or more bottles deep, floor to out-of-reach shelves of bombers. Finding the beer that someone told you was exceptionally dope can be like catching Mew back in 1996. After spending what seems like an eternity scouring bottles and seeking out rare releases, I have caught the fever. My first bomber purchase, a mere Sierra Nevada Pale Ale cradled in the crook of my arm, left me thinking gotta drink ‘em all.

Of course, setting off on this journey alone would be foolish, which is why I’ve roped a few fellows to join me. Our course is set. We begin our search for the new and notable, the weird and wonderful. While not every beer we select will fill us with delight, we can at least take note for the future. That’s where you come in. We hope that we never forget a beer that we’ve consumed, but perhaps our brain cells will become addled in the process. So here you are! Consider yourself an alcoholic Pokédex or ship’s log.

To fill your first pages, we unleash the torrents of a stormy brew from San Diego’s Ballast Point. Adorned in familiar fashion, the bottle entices the curious with a creature from the sea. But rather than a majestic blue fin with mouth agape or a similar swimmer, Victory at Sea hosts the skeletal form of a ship captain and his loyal parrot. With a bony hand gripped to the equally osseous helm, our troubled ruffian sails troubled seas. This imperial porter isn’t unlike its portrayer. Tenebrous and dark, with an electric bitterness somewhat counteracted by trustworthy vanilla, this middling beer has me gripping the pint as if it controlled the rudder. It isn’t a perfect brew, but the dramatic drink makes it worthy of a swaggering swig.

Victory at Sea is a winter offering from San Diego’s Ballast Point Brewing Company, a brewery well known among beer geeks and hop heads as the crew behind the deliciously fruity Sculpin IPA. The brewing team at Ballast Point concocted this coffee creation with 3/4 oz. of cold-brewed joe per pint, along with fresh vanilla beans. For me, the brewery took on a challenge with this beer by attempting to blend both coffee and vanilla into the already complex flavors offered by the roasted malts of a porter. Ballast Point then seemingly upped the stakes by slapping “imperial” on the bottle and boosting the ABV to 10 percent. This alcohol-heavy brew, if not done right, risks doing itself more harm than good; the porter style’s commonly thinner body might have a tougher time concealing the alcohol burn of a 10 percent beer than a thicker imperial stout. As someone who honestly prefers dark beer over water, and loves coffee, vanilla and the prospect of fusing flavors into interesting combinations, my expectations for Victory at Sea were high. I evaluated the beer on four basic sensory factors and its aging potential and gave it an overall rating of its quality based on the five criteria. 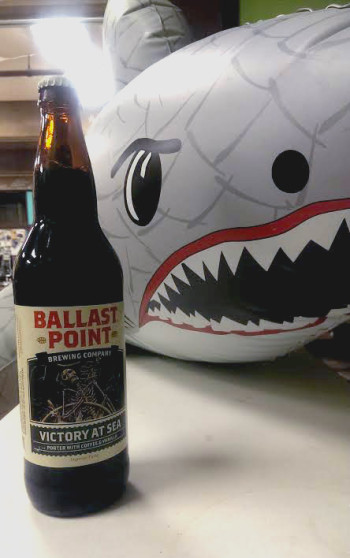 Appearance 8/10: Once settled in the glass, this coffee porter appeared a dark, ebony color that looked, well, pretty similar to coffee. The beer was as murky and dark as the seas sailed by Horatio Beerson,* so holding it up to the light didn’t get me very far. To see the bottom of a glass of Victory at Sea, I had to start drinking.

Smell 4/10: The aroma of this brew was possibly the strangest part of the whole experience. Right off the bat I got the harsh aromatics of a cup of Starbucks with a shot of something Russian thrown in. Karsk, anyone? Swirling the glass around, however, pulled out some of the finer points of this beer, with the coffee and roasted barley malt coming through more firmly as the glass approached my lips.

Taste 6/10: Victory at Sea hit the palate harder than I expected but had no noticeable alcohol bite, despite its dubious aroma and double digit ABV count. Initially, the taste was fairly burnt and slanted heavily in the direction of smoky espresso, dark chocolate and cranberries. Despite a rough debut, patience with this beer rewarded the drinker, as it glided into softer flavors of brown sugar, vanilla, cocoa and toffee around mid-palate. The coffee complimented the vanilla instead of completely overpowering it, although it definitely dominated. At about halfway in, the vanilla became more prominent, and the beer grew creamier, sweeter and more drinkable, and then finished dry but clean, without any heavy coffee aftertaste the way cold-brewed java usually does.

Mouthfeel 6/10: It was something of a middle-of-the-road dark beer, not too thick but not too thin, typical of a porter. Part of what really impressed me about this beer was that the finish, despite its bitter start, allowed my palate to seemingly cleanse itself, setting me up to relive the whole experience over and over again. Plus, the carbonation was pleasantly light, so if your liver can take it, it would be possible to put away a whole bomber and not feel bloated or burpy.

Aging Potential 8/10: Aging heavy beers can work wonders to smooth out the less pleasant ethanol burn and charred bite of a dark beer like this one. Victory at Sea was not particularly rough around the edges in terms of a burning sensation and could therefore be drunk upon purchase, if you feel so inclined. However, six to 12 months of hanging out at the back of your fridge could seriously mellow out the more bitter initial flavors.

Overall Rating 6/10: Victory at Sea is adequately executed and an interesting offering for the winter season. Instead of the usual spiced ales fraught with cinnamon and nutmeg or the fresh-hop pale ales of brewers to the North, this San Diego coffee and vanilla porter offers something fresh by attempting to do a dual-flavor twist on a time-tested classic. Good intentions aside, the beers suffers from an initially rough taste and altogether unpleasant aroma and only begins to deliver nicely a few minutes in. The coffee and vanilla play off each other well and give way to a rich, sweet porter that makes drinking the beer an adventure, but not quite worthy of the legacy of Admiral Horatio Beerson.

*Excerpt from the diary of Admiral Horatio Beerson, Commander of the British Navy and Master of the High Alcohol Content Seas. Restored by Hopstorian Heff Wiseman.

As I record to you my account of our victory over the French fleet of the savage despot Napoleon in the year of our Lord 1805, a heavy burden of guilt lies on my shoulders. I must confess, that day at the Battle of Trafalgar I had a secret ally, by the name of Ballast Point Brewing Company. Their Victory at Sea Imperial Porter was the origin of my legendary courage. How else could I have sailed into the jaws of near certain defeat at the bows of hundreds of French Man-of-War ships unless comfortably inebriated by a smooth cold brewed coffee, vanilla porter?

At first gulp, I had my suspicions on the merit of this dark concoction, but upon further reflection, or rather further drinking, its charm grew on me like vineyards on an old church in East Wales. Though the beer could not fairly be called “robust” as the bottle boldly proclaimed, Victory at Sea certainly possessed its share of noteworthy brewing virtues. First, its ample alcoholic content of 10 percent proved to be sufficient enough to remove my inhibitions to initiate a cataclysmic battle, while its mild flavor with hints of vanilla undertones soothed my anxious nerves the way a burst of Sun through the clouds calms a stormy sea. Next, the roasted coffee flavor saturated my tongue, sadly lacking the veracity I had anticipated and yearned for, yet it was a welcome progression as I awaited a final malty aftertaste. Despite the beer’s shortcomings in boldness and flavor intensity, it compensated with its smooth caramel texture, devoid of the alcoholic bite to be expected of a 10 percent brew. While Victory at Sea may not be the first choice of the pretentious wine-drinking buffoons who reside in Paris, for myself, and the rest of the Royal Navy, it got the job done. And more importantly, it saved the British Isles from the tyranny of French saisons.