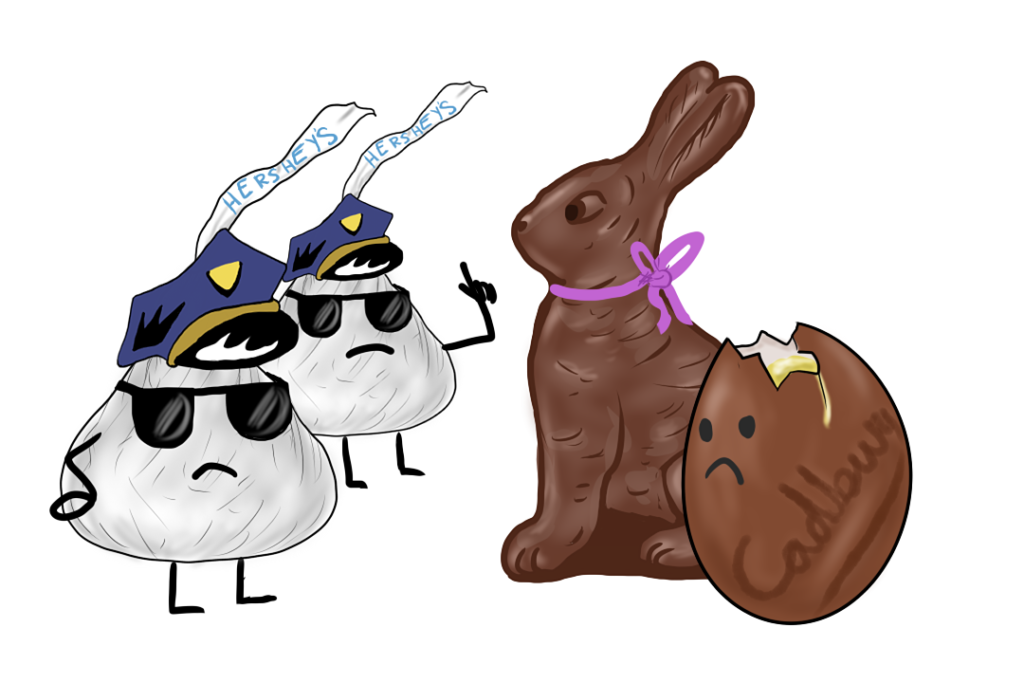 Have you heard about the chocolate feud of the century? It’s a big deal people (unless you don’t eat chocolate and in that case there is something seriously wrong with the way you live your life). As a foodie and avid chocolate consumer, this issue is on the top of my list of concerns.

Okay, I’ll stop being dramatic. Here is the deal: The Hershey Company has struck up a deal with Let’s Buy British Imports (LBB) ensuring the end of mass Cadbury chocolate imports to the United States. According to a CNN report, The Hershey Co. originally filed a lawsuit in August claiming trademark infringement because some Cadbury products look too similar to Hershey products. The article quoted Hershey spokesman, Jeff Beckman, saying, “we work hard to protect these important intellectual assets and defend them against infringement.” Some people may agree that Hershey’s has this basic right to protect its intellectual property … don’t get me wrong, I think the Copyright Clause in the constitution is extremely important for the advancement of this country, but not when it gets in the way of the pressing issue of being able to satisfy American tastebuds.

I’m not the only one upset about the end of British-made chocolate in the United States. A #BoycottHershey trend has taken to Twitter. British chocolate fans everywhere are enraged. Twitter user @Footnotegirl posted “@hersheys I’d #boycotthershey but lets face it, I don’t eat your crap chocolate anyway. If U can only compete by blocking, just give up.” The outraged are also raising their voices against the Hershey’s lawsuit with a petition on MoveOn.org which already has over 31,000 signatures and is still growing!

Now, the agreement between LBB and the Hershey Co. does not mean there will be no Cadbury chocolate in the U.S., it just means there will be no British-made Cadbury chocolate. This is where the major earth-shattering problem comes into place. The Hershey Co. has a license to manufacture Cadbury products in the United States, and they have shamelessly changed the recipe, ruining the iconic Cadbury Dairy Milk chocolate taste. According to New York Times’ Tatiana Schlossberg, American-made Cadbury bars include emulsifiers that reduce the viscosity of chocolate, giving it a longer shelf life. Those emulsifiers also make it taste like crap. Okay, I added the last part, but that does not make it totally untrue.

British chocolate is so much better than American chocolate because the two countries have different standards as to what exactly constitutes as acceptable chocolate. British law states that a milk chocolate product must contain at least 20 percent cocoa and milk solids whereas in the U.S. the percentage is just 10. That, without a doubt, makes a huge difference in the way the chocolate tastes. The result: an unacceptable, cheaply-made candy bar which tastes much less rich and delicious than it was originally intended.

To some, the anger and disappointment among British chocolate lovers may seem to be an unimportant topic. After all, we are just discussing chocolate, right? But to those people, I say never underestimate the wrath of a chocolate lover’s broken heart. Just take a look at trade values. The Hershey Company stock has declined significantly since the announcement of their deal with LBB became public. In just one day, Jan. 29, the stock fell by 6.1 percent. I think this plummet can be attributed to the fuming U.K. Cadbury fans and their seek for vengeance.

I will leave you with one last note. There are still some Cadbury chocolates on store shelves. Run and stock up fellow chocolate lovers before it’s too late — just make sure it says made in U.K.!

HSY’s stock didn’t drop because English-made Cadbury products will no longer offered in the US. It’s because HSY didn’t make its Q4 numbers. Even though this is an Op-Ed, you might want to check your facts a little more thoroughly before publishing your articles.

Overall, this is a good article…but I agree with Lauren, you need to fact-check more thoroughly before publishing (yes, even for an op-ed). Trademarks are governed under the Commerce Clause, not Art. I, §8 (what you referred to as the Copyright Clause).