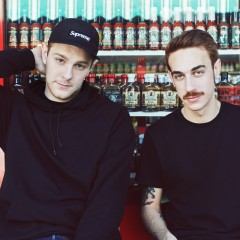 There are many pros to living in the quant seaside town of Santa Barbara: the model-esque beach bums, the year-round sunshine and, of course, the unbelievably cheap ticket price to see festival-headlining acts.

In an altruistic act of maintaining the good name of the Santa Barbara music scene, We The Beat and UCSB DJ Club are bringing out the best and brightest in Trap-style, G-House and NuDisco-Funk. LOUDPVCK, Djemba Djemba, AC Slater and Zimmer will be vibrating chest cavities of hundreds of young people with low frequency bass wobbles and over-looped high hats at the Earl Warren Showgrounds this Saturday, Jan. 31.

Comprised of trap-style wonder kids Kenny Beats and Ryan Mark, LOUDPVCK has come a long way from the remix-only project that started when they met at Berklee College of Music in 2009. In 2012, they soared up in charts during the explosive popularization of trap music riding the coattails of Baauer, Flosstradamus and RL Grime.

However, the cannabis-enthusiast trap duo proved to be more than another set of EDM flavor-of-the-week DJs. In late 2013, as the ever-fickle electronic music scene left the iconic sound of the dirty south behind in favor of an obnoxious monotony of Big Room House synths, the PVCK remained tried and true to their hip-hop roots.

While their latest releases feature far more sophisticated layering than early hits like “NV$TY” and “DIP’N IT,” the soul of gangster rap which built their fan base is still brimming in tracks like their A$AP Rocky bootleg. Also, if having a featured set on the radio show “Sway in the Morning” doesn’t certify these guys’s authenticity as hip-hop souls, little else can.

Also on the bill for Saturday is underdog producer prodigy Djemba Djemba. It’s hard to know what to make of this kid. Andrew Swanson, as his parents know him, is a camera-shy enigma, a rarity in EDM culture where it seems the newest sound is as important as the most fashionable haircut.

Swanson’s social media is littered with psychedelic paintings of jungle cats and sideways photos of him hunching his shoulders in playfully awkward poses. But don’t let that fool you — this guy is no slouch. He has served as the primary audio engineer for several of the biggest names in the industry, most notably Diplo.

Swanson is a producer of phenomenal talent whose reach extends beyond his solo project. His name pops on just about everything from track credits on “The Hunger Games: Catching Fire” soundtrack to Chris Brown’s latest solo album, X.

Those familiar with his Boiler Room set will know the DJ disdains being encapsulated by one genre of music. For a prediction of the nature of his set on Saturday, check out his SoundCloud feed. True to his versatile tastes, Swanson’s SoundCloud is comprised almost exclusively of the latest and greatest in electronic music by artists you’ve never heard of.

Next up, AC Slater of Dim Mak fame needs no grand introduction. He was a pioneer for heavy bass, going one deeper before it was cool. The Tchami signature bass wobbles that now fill main stages across the world owe Slater a kiss on the cheek for paving the way over four years ago.

But don’t expect fist pumping and jumping during AC Slater. His will be a slower, tempo hip-swaying clubby set, a welcome refresher to counterbalance the headlining act.