The Arbor is home to people of all varieties. You get UCSB clubs trying to fundraise, outside groups promoting their causes, and we all remember how it was around the last election. However, while many come and go, one man who keeps coming back is Larry Cavaletto. Many would recognize Larry from his warm smile and Peanuts-inspired “Got Questions?” booth. I decided to talk with Larry to see if I could learn a little more about why he does what he does. 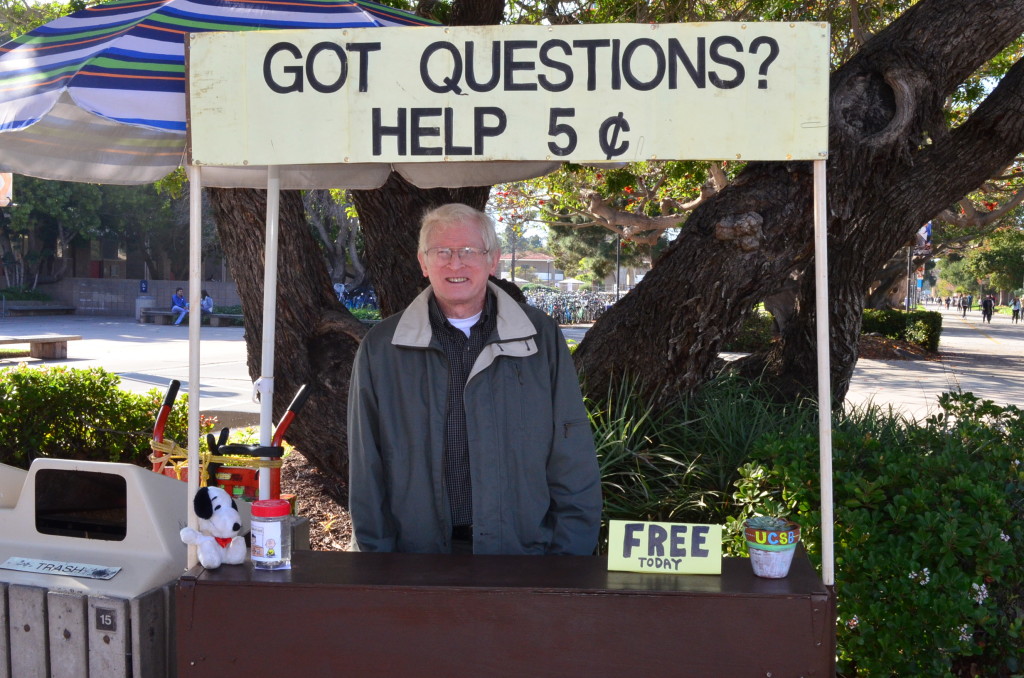 Evan Swerdfeger: Where are you from originally?
Larry Cavaletto: Goleta, born in SB at St. Francis

ES: What were you doing before you started here?
LC: I was a farmer, relatives were a farm family. We grew lemons, avocados, and even Christmas trees for 25 years.

ES: And you’re done with that now?
LC: Well, I make a joke, I’m self-employed. When you’re self-employed you don’t have to work, but if you don’t work you don’t eat. So right now I’m selling firewood, trying to make a little bit of an income.

ES: When did you start with this booth?
LC: I started just over the summer… I have a heart for young people, I’m not educated but just with long life I get life wisdom. You’re supposed to learn a lot from all of the mistakes that you make, so I should know a lot.

ES: Do you find that your best conversations happen with people who are spiritual, or non, or is it about equal?
LC: Of course the spiritual conversations seem to have more meaning. But there’s hurting people that just don’t know what to do, and if you can just encourage them to hang in there… There’s stuff in life that’s really hard but you gotta do it… It’s a long race and you just gotta do it. But a lot of people are lazy, they’re not self-starters… So sometimes I try to get people just to realize that they just have to do something.

ES: What kinds of reactions did you get from people at first?
LC: I haven’t really gotten much negative. I got one girl that came up here and wanted to know if this was a religious booth and I said no. I was honest, because it isn’t about religion, it’s about relationship. Then she backed off… I don’t get in any arguments with them, because I can’t convince them. In fact, as far as authentic Christianity, I tell people, “I could probably talk you in to it, but if I could talk you in to it someone else could talk you out of it.”

ES: Do you get people that keep coming back?
LC: Yeah, I do. A lot of secular people that have watched me, one guy watched for a while and knew what I was doing. There was a guy a month ago that was here, that was very offensive, trying preach the gospel. 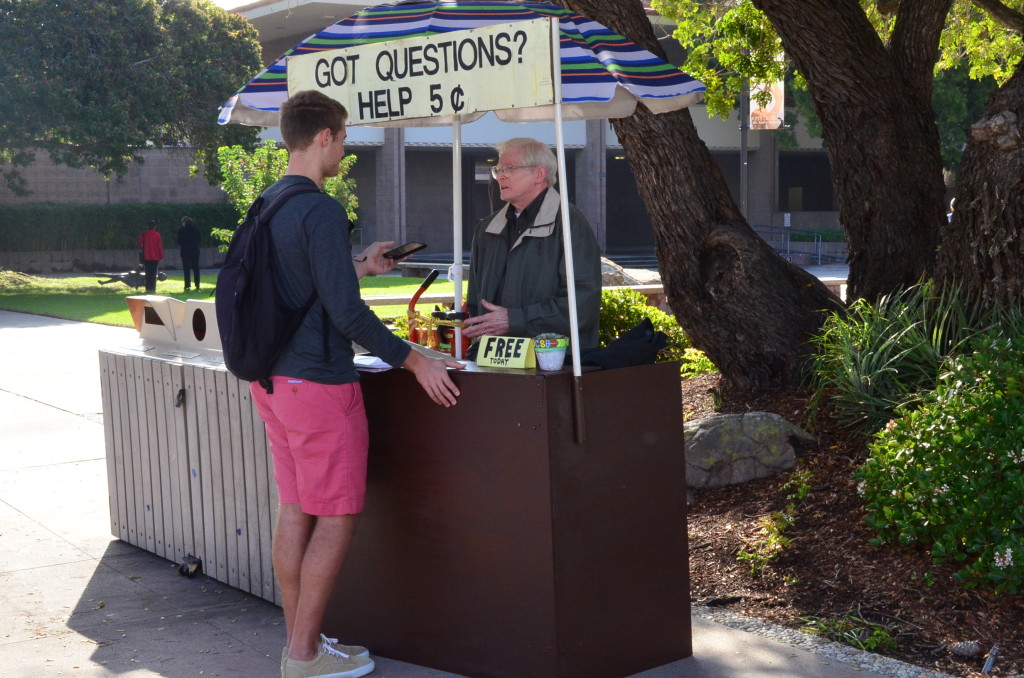 ES: I remember him, you seem to have an opposite approach.
LC: Yes. And the secular guy who had been talking with me, he noticed that. He said, “you guys are here for the same purpose.” And I said, “Well… bottom line we both probably… want people to come to know the Lord.”… I don’t really believe that God has called him to preach in that way, and he was very preachy. He wasn’t here to have a discussion. So there was a difference, and this secular guy noticed that.

ES: It’s the difference between talking with someone, and talking at someone.
LC: Yeah, so I’m here to have a discussion. Ill talk about anything, best I can. And like I said, I’ll try to bring up questions… So sometimes I’ll close our conversation if it got in to a spiritual issue. I’ll say, “Okay so I’ve given you some information which I believe is true. You’re an adult; you’re going to be responsible for this. Now you can go away, and you can follow up on it, and see if what I said is true, or you can say ‘That old man is crazy’”. And, of course, they laugh… it’s just a process, it takes time. If I can be part of that process then that’s what I’m here for.

ES: Have you enjoyed doing this? Has it been what you hoped it would be?
LC: I’ve enjoyed it immensely. There can be times, an hour or two, of not talking to people. And that’s okay… There hasn’t been a day go by where there hasn’t been at least one in depth conversation with someone. Maybe not even spiritual, but just trying to help them make it through the day, and trying to tell them that it’s alright.

ES: Do you plan to keep doing this?
LC: I hope to. I try to come a couple times a week, but life is out there too. But I enjoy it. And I believe, from my past experience, that working with any type of people it’s a consistency, and building up trust. I do also believe that authentic Christianity, when people see authentic Christianity, they see people loving one another.

ES: A Relationship?
LC: A relationship. I mean, we were built for relationships. Not just with God but with one another… Another illustration I love is… this guy (who) took his son, maybe four or five years old, to a birthday party and they had this big blow up water slide that his son wanted to go down but he was scared. So his dad went down the water slide with him over and over and over. Finally he talked his son in to going down the waterslide himself. His son was so scared, but he went down himself… I think, in life, there’s a lot of things we would love to do, but we’re so scared to do it. We need to find someone to help us through, someone that’s gone down the waterslide. Once we’ve done something… then we can help someone else.

ES: You said you don’t see this primarily as a religious booth, what is this place here for?
LC: “Got Questions”. You could call it giving back to the community. I mean, whatever years I have left, I don’t know but I’m here… not for religion, but for relationships… I don’t want that stigma that comes with the label of being “religious”. I just want to be available to help people that have questions answer whatever questions they have. In that way, it stays pretty secular.

As we’re wrapping up a girl walks up to Larry’s booth, looking timid at first. After a pause she asks him simply if she should drop her math class. With that, Larry is right back in action. So the next time you are passing through the Arbor, whether you’re going through some existential crisis or you are just confused over your schedule for next quarter, give Larry a chance. After all, he has been down the waterslide plenty of times before. 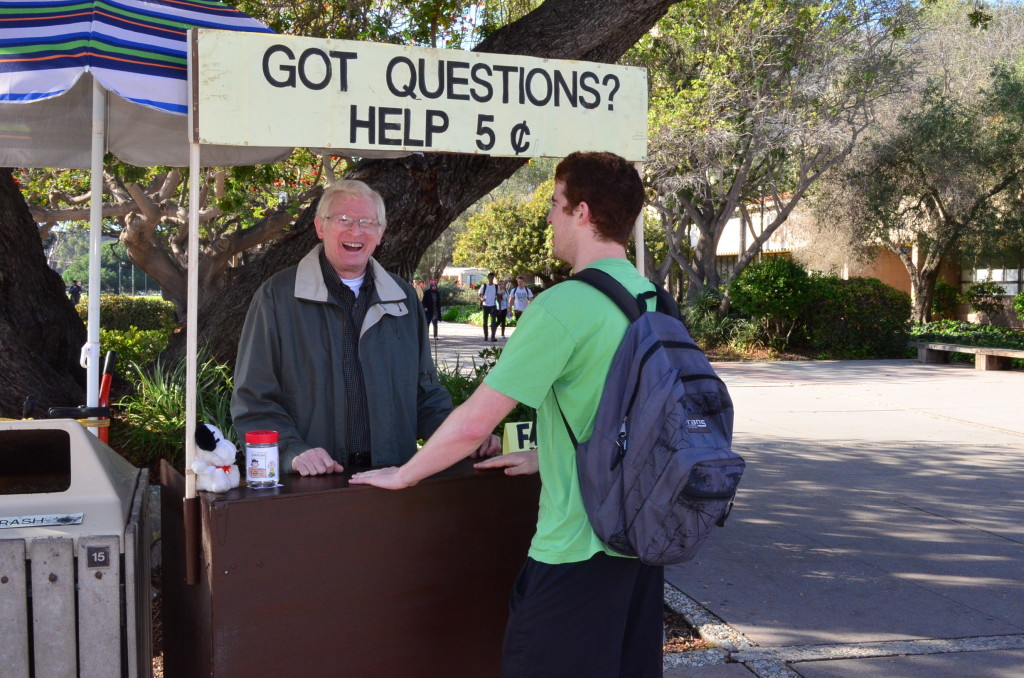