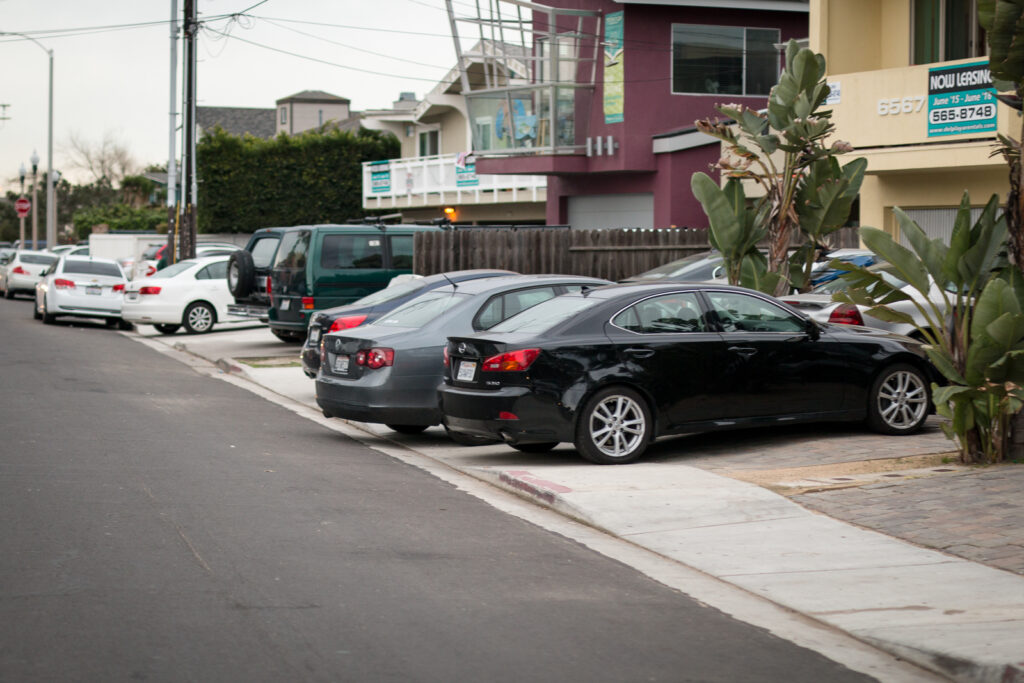 Vehicles parked in a manner that is on or blocking sidewalks will soon be cited by Isla Vista Foot Patrol. Stephen Manga/Daily Nexus

Last week, Isla Vista Foot Patrol announced a policy stating all cars in Isla Vista that are parked on or blocking a sidewalk, even in front of residents’ driveways, will be cited for traffic violations starting Feb. 15.

The new restrictions are part of enforcing California Vehicle Code § 22500, which prohibits sidewalk parking. According to IVFP officials, deputies began notifying I.V. residents and property managers in November to make residents aware of the rule change come Feb. 15. The purpose of the new citations, according to the policy, will be to increase pedestrian visibility on the sidewalks and therefore increase their safety by keeping them out of the street.

According to IVFP Lieutenant Rob Plastino, the high population density in I.V. causes residents to park illegally on sidewalks to make room for more cars.

It’s the lack of space on the sidewalks when there are parties. If the streets get crowded when students come out to party, how can they think about moving them all onto a sidewalk? – First-year sociology major John Michael Joseph

According to a statement from IVFP, the practice of parking on the sidewalk forces pedestrians out into the street and into the path of oncoming traffic. Citations will also be issued to allow pedestrians with physical limitations safe use of the sidewalk.

Third-year biochemistry major Sam Perez said he has not ever seen law enforcement officers try to keep people out of the streets in I.V.

“I’ve never seen I.V. Foot Patrol, or any law enforcement for that matter, make an effort to keep students out of the street here,” Perez said.

Plastino said the law wasn’t enforced in the past because I.V. lacked a complete sidewalk network.

“You go over to Goleta and you’re not going to see a whole bunch of people just standing in the middle of the road, because they have sidewalks there,” Plastino said. “So the thought was: If you’re a pedestrian and you’re walking down DP, you need to be on the sidewalk; you can’t be in the roadway.”

“It’s the lack of space on the sidewalks when there are parties,” Joseph said, “If the streets get crowded when students come out to party, how can they think about moving them all onto a sidewalk?”

If people want to walk on the sidewalk or stand on the sidewalk, they’re free to do that, but the roadway needs to remain clear. – IVFP Lieutenant Rob Plastino

Plastino said California law states that cars cannot park in a way that blocks sidewalks and that now that DP has a sidewalk running its full length, IVFP can enforce the law correctly.

“I’m hoping that people start realizing that the sidewalks are there now, and sidewalks can be utilized for pedestrian use,” Plastino said. “If people want to walk on the sidewalk or stand on the sidewalk, they’re free to do that, but the roadway needs to remain clear.”

First-year biopsychology major Adam Chukhman said it would be hard to keep everyone off the street even with the new restrictions because people simply don’t want to walk on the sidewalks.

First-year chemical engineering major, John Stair said the he does not think citations would keep people from walking in the street.

“It’s clear that they want people to stay off the street and stay on the sidewalk, but that’s just never going to happen,” Stair said.

According to a statement from IVFP, I.V. will need more funding to be able to complete sidewalk installation along El Nido, Trigo, Seville and Madrid roads, as well as the 6500, 6600 and 6700 blocks of Sabado Tarde.

I love how people this age immediately turn stupid the second you tell them to do something differently. Like any normal town is overflowing with people who just don’t want to walk on the sidewalk. Stop being an idiot just because an adult told you what to do.