The Daily Nexus
Sports
Winless Gauchos Continue Search for First Win at UCR
January 22, 2015 at 5:06 am by Michael Jorgenson 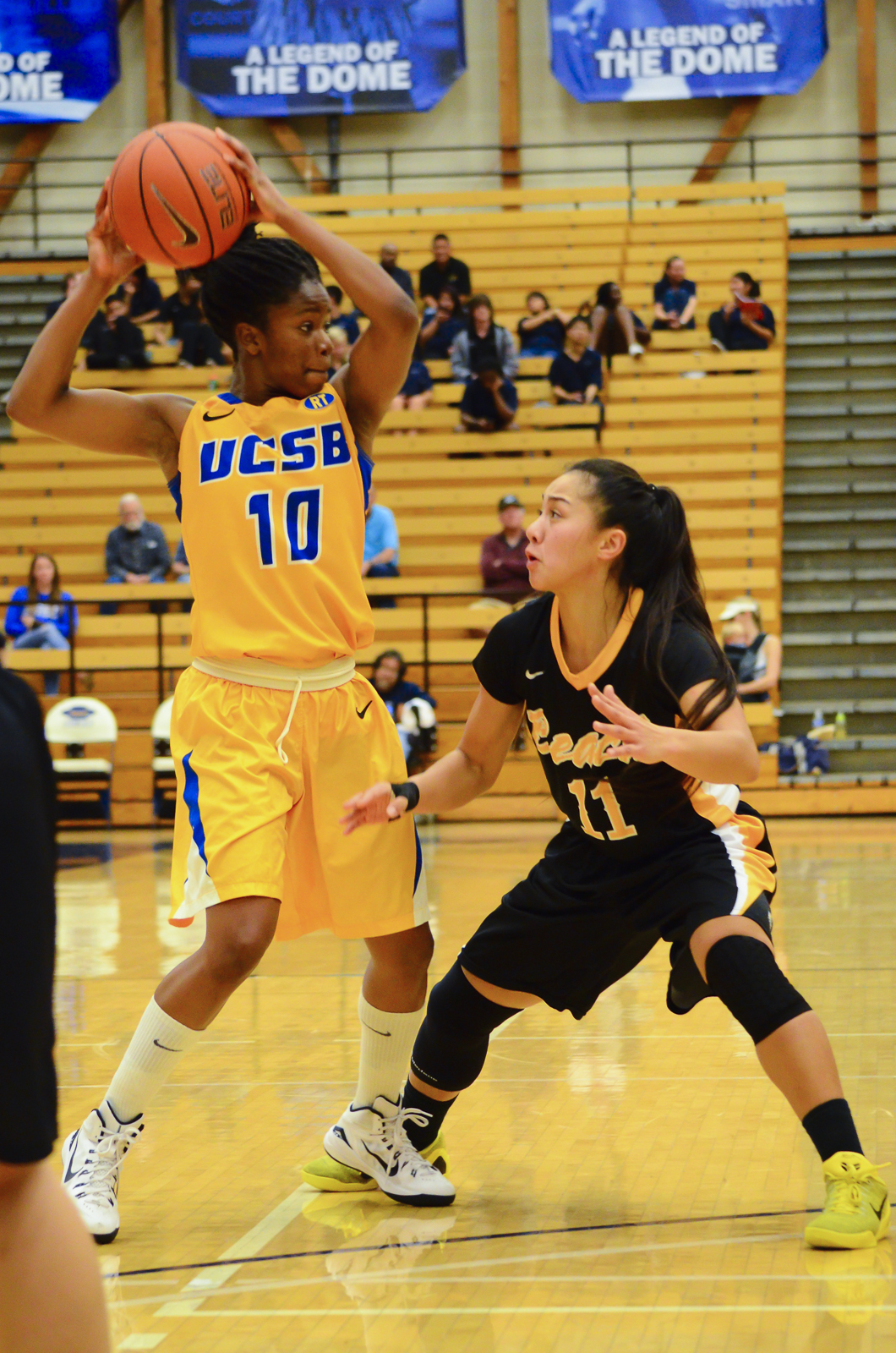 In the match against Long Beach State, Onome Jemerigbe looks to pass to a teammate. (Christina DeMarzo/ Daily Nexus)

After taking beatings against two of the conference’s best teams last weekend, the UCSB women’s basketball team heads on the road tonight to face UC Riverside and the likely leading candidate for Big West Player of the Year in junior guard Brittany Crain.

UCSB, who has not won a meaningful game in over 11 months, finds itself at 0-16 overall and 0-3 in conference now well past the midway point of the season. The Highlanders have managed a respectable 10-8 overall record but haven’t gotten off to the best start in Big West play at just 1-3.

The main problems that have been bringing UCSB down all year haven’t improved since Big West began two weeks ago, as both its scoring average and margin of victory have decreased.

The Gauchos find themselves in last place in the conference in a number of categories including scoring, field-goal and three-point percentage, rebounding, assists and opponent shooting.

Where UCSB has done well is in ball control, where they rank fourth at 16.2 turnovers a game, a strength they will need going up against one of the better defenses in the league.

Sophomore point guard Onome Jemerigbe has been a bright spot all year as she has assumed a leadership role within a team that has lacked an identity since the first game of the season. Jemerigbe comes in at sixth in the conference in assists with 3.7 a game while leading the team in both scoring (8.2 ppg) and field-goal percentage (44.1).

Coming in off the bench, guard Makala Roper has provided a spark all year with her long-range shooting, accounting for 65.8 percent of her team’s total three-pointers with 25. The freshman knocks down 2.64 threes per 40 minutes, good for eighth in the Big West.

On the defensive side, senior center Clair Watkins has held down the middle averaging the second-most blocks per game with an average of 1.9.

Statistically, Riverside has been a near mirror-opposite from the Gauchos. Led by Brittany Crain, the Highlanders possess a potent offense that ranks third in conference scoring at 69.1 points per game and second in three-point percentage at 34.9. Crain has piled up a conference-most three Big West Player of the Week awards this season due to her ability to excel on both sides of the court. Along with being the Big West’s leader in points per game (23.6), steals per game (2.3) and free throws made (74), she has shown her efficiency, coming in at second in three-point percentage (39.8) and fourth in free throw percentage (78.7).

Backing up Crain on the offensive side are sophomore and junior guards Simone DeCoud and Annelise Ito, who average 12.9 and 11.6 points per game, respectively. Ito is also fifth in the conference in rebounding, pulling down an impressive 6.9 a game. Redshirt senior guard Dynese Adams will likely put pressure on the Gauchos’ frontcourt, as she is neck-and-neck with Crain for first in the Big West in steals, Crain with 42 and Adams with 41.

Despite Crain’s excellence, this hasn’t turned into a whole lot of wins for Riverside, as it most recently dropped back-to-back nine-point losses at UC Davis and Hawaii last week, falling into seventh place in the conference at just 1-3.

UCSB and Riverside are set to tipoff tonight at 7 p.m. at the UCR Student Recreation Center.