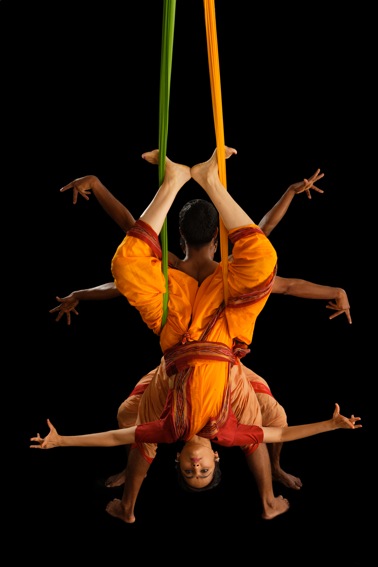 In the midst of telling a classical Indian folktale, dancers Shivani Thakkar, Leah Vincent and Joanna Marie Collins called for their favorite groove. Their prayers were answered by the almighty sound board operator, and “All the Single Ladies” resounded through Hatlen Theatre. The performance, “A Story and a Song,” was part of the UCSB’s South East Asian Dance Festival, Dances of India. Stretching over four days, Dances of India featured live performances, a seven-hour conference and film showings of “Nrityagram: for love of dance” and “Kamhaka. Through Prayerful Eyes.”

But let’s get back to Beyoncé’s arrival at the show. Wild energy caught on like fire in the audience, who was delighted by this impromptu shout out to modern culture. Quickly, however, the jamming trio was reined in by principal dancers Dr. Aparna Sindhoor and Anil Natyaveda, who returned to the story of the Flowering Tree. Though it is never a bad time to jam out to Beyoncé, the use of her music in this performance was particularly well-timed; the energy from “Singles Ladies” settled slowly, but did not dissipate. Instead, it allowed for a vibrant sub-energy to permeate the regal beauty of what second-year dance major Mary Forbes described as “hardcore classical [Indian Dance].”

This performance of Bharata Natyam, a classical Indian dance style, was brought to UCSB last Thursday night by Navarasa Dance Theater (NDT), a contemporary dance company from Boston. Bharata Natyam was originally danced in temples by devadasis, female servants of deities. Sculptures in the temple to the Lord of Dance, Nataraja, served as the inspiration for many Bharata Natyam poses.

One of the principal dancers, Dr. Sindhoor, doubles as NDT’s Artistic Director, having founded the company in India in 1991. Natyaveda serves as half of two co-directors, the other being S. M. Raju who was unable to attend the conference with his colleagues. Dr. Sindhoor choreographed the performance with the goal of the dance being the story, rather than the dancer’s hand motions telling it. For example, instead of posing as a tree during her transformation, Dr. Sindhoor used aerial silks in front of a projection of trees to achieve an ethereal embodiment of the girl’s answered prayers.

Forbes attended NDT’s performance and Amrapali Ambegaokar’s performance of “Kathak: The Essentials.” “Both [performances] really oriented towards the audience, but the Bharata Natyam was scripted whereas the Kathak was a medley of dances.” Forbes’s analysis rings true; Ambegaokar took a more casual approach in her performance of Kathak, explaining her dances throughout the performance with help from her mother and guru, Anjani Ambegaokar.

After months of hard work, the UCSB Dance Department put on the Dances of India festival. Senior lecturer Valerie Huston and department affiliate Kay Talwar spearheaded the idea and worked for four years to bring artists and researchers together in a monumental celebration of dance.

“We wanted to create a complete package for the students so they get the class experience, they get to see a performance and then they get this on a more academic, scholarly level,” said Huston.

Throughout the four days, three forms of Indian Dance were brought to UCSB: Kathak, Bharata Natyam and Odissi. Odissi was originally performed in temples to a form of Krishna known as Jagannatha by female “chosen ones” known as maharis. Odissi was presented in the form of the film, “Nrityagram: for love of dance” shown on day four of the festival. Nrityagram is a residential school for dancers wanting to study classical dance styles. Literally translated as “dance village,” Nrityagram was founded in 1990 by Protima Bedi, who intended it to be a haven for dancers. Fifteen years later, Odissi is the only form gets taught in the village.

At Friday’s seven-hour long conference, the first guest among many to present research was Kathak dancer and researcher Pallabi Chakravorty.

“I want to dance rather than present my critical analysis right now,” she laughed as she looked around at the saris of all colors and designs hanging along the walls. Chakravorty is an assistant professor and the Director of Dance at Swarthmore College and has devoted many years to researching the gradual sexualization of Indian dance over time.

A highlight of the conference was an incredible panel of three mother-daughter guru relationships: Kathak dancers Anjani and Amrapali Ambegaokar; Bharata Natyam dancers Viji and Mythili Prakash; and Mohiniyattam dancers Bharati and Vijayalakshmi Shivaji. Mohiniyattam literally translates to “dance of the enchantress,” and is generally characterized by soft and fluid movement.

Unlike the dancers in the haven at Nrityagram, the panel ladies underwent their training while living a contemporary lifestyle. Amrapali Ambegaokar and Mythili Prakash both received degrees from the UC system, at UCLA and Berkeley, respectively.

Most of the women, mothers included, studied other forms of dance in addition to their specific classical style, a difficult feat.

“Learning a different dance form enhanced my experience and my ability to understand Bharata Natyam, [but] I feel one cannot do more than one art form in one lifetime,” said Viji Prakash.

The difficulty of learning another dance form accounts for the specializations of each mother-daughter pair.

In an interesting point of the conversation, all three daughters failed to recall hours of training to achieve their dance prowess. Instead, they experienced an “osmosis”-like effect from watching their mothers. Vijayalakshmi Shivaji, the only daughter raised in India, eloquently described this process. “As [my mother] embarked on her journey of Mohiniyattam, I would just quietly watch and observe … It’s a wonderful blessing to be part of a family where you’re always in this atmosphere of music and dance… we just absorb it by osmosis,” she said.

Similarly, Mythili Prakash remembered learning by observation of her mother’s classes and students. Amrapali Ambegaokar recalled being taught to dance the way her mother Anjani envisioned, rather than the way Anjani herself would dance Kathak. Even so, there was no lack of emphasis on the importance of observing her mother. Along these lines, a quote from the film “Nrityagram” described the guru-disciple relationship as one in which the student must “imbibe the spirit of the teacher rather than their knowledge.”

Hopefully, through this four-day-long celebration of Indian dance, UCSB’s dance majors and other participants have been allowed a good opportunity to “imbibe the spirit” of all the teachers who came to share their culture with our community!

A synopsis of the fairytale the performance “A Story and a Song” adapted can be found at earbox.com/stage-works/a-flowering-tree.

To learn more about Pallabi Chakravorty’s research, check out the book Bells of Change: Kathak Dance, Women, and Modernity in India.