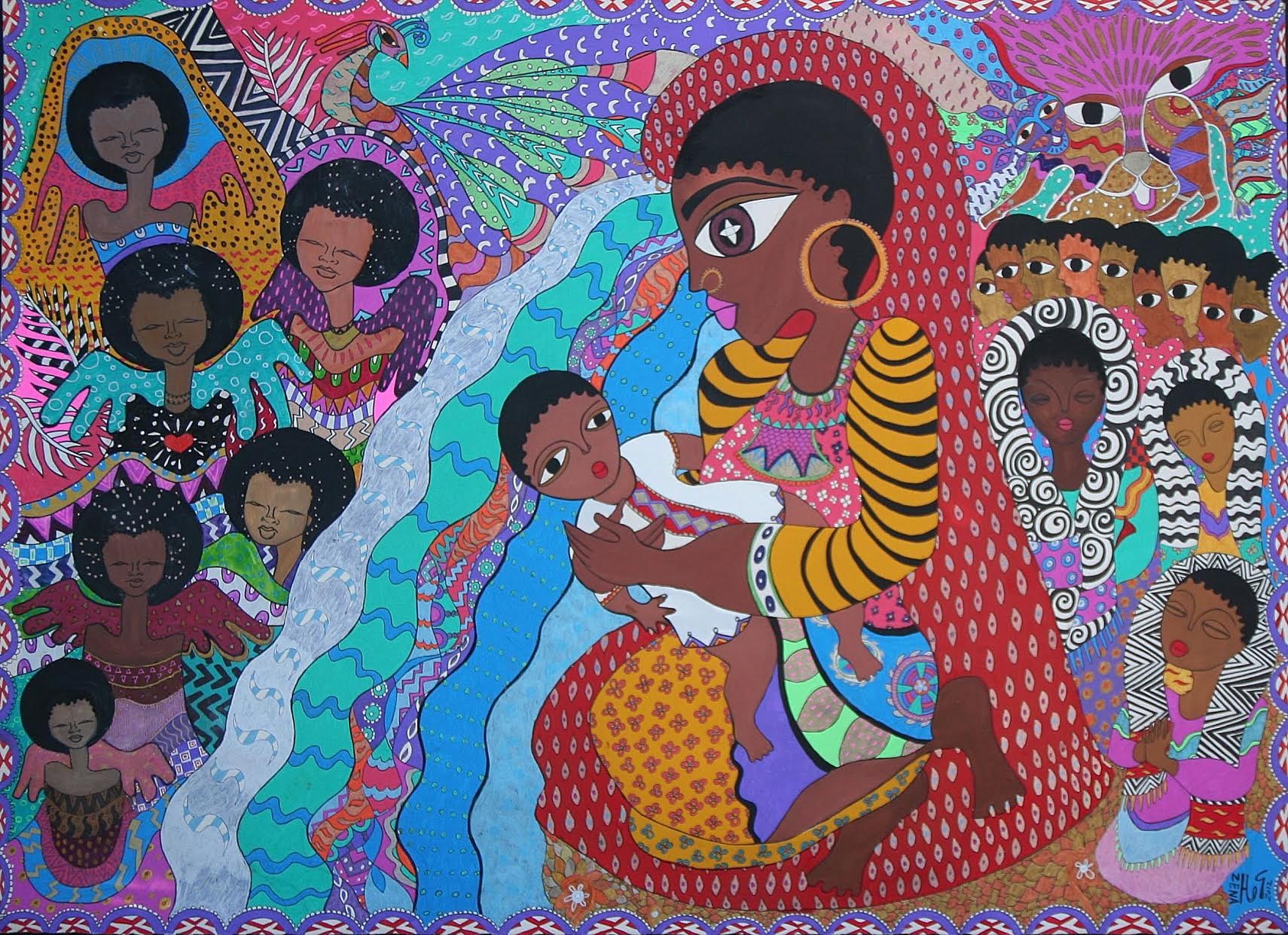 Time and time again, the MultiCultural Center transforms itself into unique spaces for poetry, visual art, music and overall cultural education. At this very second, the ordinarily bare walls of the MCC Lounge are embellished with the recent and eye-catching work of painter Zéna Carlota Pearl Allen.

A self-trained artist, Allen graduated from Antioch University Los Angeles with a B.A. in Urban Community and Environmental Studies in 2010. After graduation, she explored themes of cultural knowledge and preservation through the mediums of painting, sculpture, storytelling and music.

Jumping to today, Allen is an established writer, educator, musician and traveler whose inspirations come from a range of sources. As a child, the young female was “inspired by the folklore and iconic imagery [she] encountered while [traveling to] the Caribbean, Latin America, and East and West Africa.”

Based on the ritual, mythology and dreams in Diasporic African and Indigenous cultures, Allen’s most recent project is called “Of Water and the Spirit.”

“My goal is to use art and music to create experiences for human beings to reimagine themselves, their history and what hinders them,” she said in an interview with the Daily Nexus.

Currently located in our very own MCC Lounge, the exhibit was created with minimalism in mind. Each piece is centered on a white border inside of a black rectangular frame. The white border allows ample space in between the eight vibrant paintings. Descriptions are offered in three pieces of the overall wondrous display.

Observed together, the images explore the meaning of identity and liberation for people of diasporic African and Indigenous cultures. The term “diaspora” comes from the ancient Greek word meaning “to scatter about.” Allen’s work focuses on African and Indigenous cultures that have dispersed all over the world, and gives a backdrop in which to honor their traditional history.

“What was lost, what was gained” is a limited edition giclee print that asks its viewers to think about “What [it is] we keep, lose, accept and resist in the process of leaving our homelands?” Illustrating an Ethiopian woman during her migration to the U.S., the right-hand side holds two pale blank faces that speak for the young woman’s unknown venture to America. Around her neck hangs a cadmium orange and picton blue boom box that demonstrates how hip hop music and other aspects of African-American culture have influenced her journey.

“Birth” provides a darker insight on life. With dark green leaves placed against a purple and black backdrop, a woman sits and cries as a supernatural character lifts only one of two girls from her womb. The watercolor and ink on mulberry paper is dedicated to Allen’s twin sister, Zara. She captions the piece “Birth: Not all that is lost, is forgotten.”

Allen’s personal favorite, “Mami Wata,” is an illustration of a water spirit pantheon that can be found in the African diaspora. Depicted as a mother, nurturer, protector and enforcer of the balance of life, a serene woman — whose hair is like that of waves and snakes combined — is one with the earth. “This piece embodies the spirit of the exhibit because it demonstrates the inherent relationship [between the African diaspora’s rituals and traditions and the natural world],” Allen said.

Emphasizing the main theme of interdependence between the African diaspora and the natural world, the visual artist hopes to apply her same commitment to art to her “future work with communities locally and abroad.” Specifically, the determined young woman wants to share her love of ethnomusicology, folkloric studies and healing arts with fellow women and girls in the African diaspora.

For now, Allen is reaching out to UCSB’s student body by displaying her vibrant and story-like images on campus. The devout artist’s work will be on display until March 13. Feel free to stop by the ever-changing MCC Lounge and explore the meaning of individuality and liberation by taking a walk through “Of Water and the Spirit.”