The Daily Nexus
Sports Blogs
San Francisco 49ers: Harbaugh Out, Tomsula In
January 20, 2015 at 5:01 am by Edward Moss 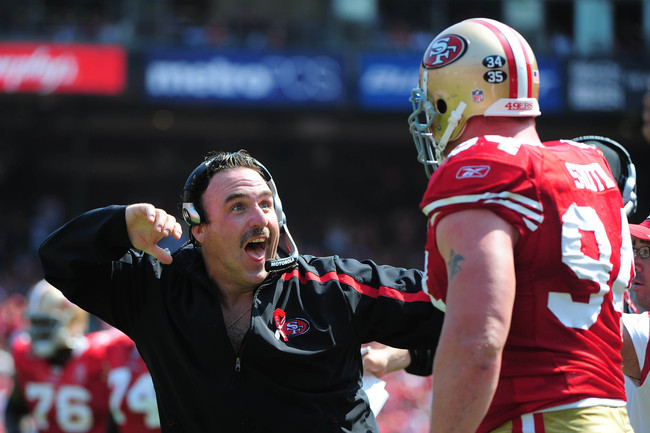 ​I don’t like the decisions the San Francisco 49ers are making so far this offseason. After going 8-8 with a team that some people thought could have made another run deep into the playoffs, it was evident that changes were going to have to be made. But I see contradictions in what the 49ers management is doing and I am confused about the direction of the team.

​Yes, head coach Jim Harbaugh had to go. He had a fantastic run with this team, with a 44-19-1 record over four seasons and going to three NFC title games and the Super Bowl. His time with the 49ers will be viewed as a success that unfortunately timed out. And I’m sure he’ll do well as the head coach for Michigan.

​The 49ers then quickly turned to defensive line coach Jim Tomsula to be the team’s new head coach. Tomsula has been with the 49ers organization since 2007 and has been instrumental in the team’s success over the past few years, yet he does not have any NFL coaching experience and he is too mild-mannered for my liking.

He knows football and has coached at all levels, from being an assistant coach living out of his car at Catawba College, his alma mater, to being a head coach for the Rhein Fire in NFL Europe in 2006. Tomsula is also a polar opposite to Harbaugh in his presentation.

Tomsula’s press conference was nothing like Harbaugh’s were. He was quiet and he mumbled and he spent an hour giving truthful, yet unpolished answers. But maybe the change is what the 49ers need. He is someone from within the organization that the management can have control over, who knows the system already.

These decisions would make more sense if the 49ers had kept the rest of their staff. San Francisco will only return running back coach Tom Rathman with everyone else being told to move on. By choosing a coach from within the organization, I would have expected the 49ers to keep the rest of their coaches in order to continue playing with a similar system. Instead, management wants to almost completely retool and take on more power in the decisions for coaches and players. It appears omsula will not have much say in the decisions for new coaches on his staff as management wants to increase its influence on the team itself.

I would have wanted to have the management select defensive coordinator Vic Fangio for the head coaching position and for the 49ers to keep the majority of the staff in place. But instead, management wants to retool, yet keep a coach from the past era. I think its better to completely rebuild the staff or to promote one and keep the rest. Now Tomsula will be trying to implement the system management wants without familiar coaches available.

The 49ers have a good team. They were riddled by injuries this year and didn’t perform to their capabilities. For the team to do better next year, everything on the field rides on quarterback Colin Kaepernick’s shoulders. This year, he had trouble passing in the pocket and did not utilize his speed enough. For the 49ers to be successful, Tomsula will have to let Kaepernick run free and help him to continue to grow as a passer at the same time.

I expect to see more changes for the 49ers this offseason and for management to play a large role in all of them. Hopefully they can turn this team around and we can remember 2014 as a fluke season in between years of success.

you said: jim haurbagh had to got, and yet, failedto explain why. You said that management want more control of the team, yet they know foot ball as much as I do, haurbagh was in the NFL as a player, he knows the game. May be I am ignorant but what are the credentials of this ”managment” meaning balkee and jed york? what collegeof NFL team they play?

Your comment is on point, front office is really trying to kill this team, they were 8~8 because of front office squabbling with Harbaugh and making poor off-season moves this past year. Prepared to have a downward spiral the next couple of years. How many successful teams have a front office that involves it’s self to much in team other than operational and discipline.