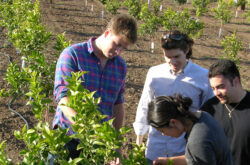 Apeel Sciences is a start-up that aims to reduce worldwide food waste and pesticide-use through ultrathin film-like crop sprays that extend the shelf life of produce and camouflage the growing crops from pests. James Rogers, CEO and founder of Apeel Sciences in 2012, first came up with the concept while partipicating in UCSB’s Technology Management Program and engaging in post-doctoral research in UCSB’s Materials Research Laboratory under Gui Bazan.

The Apeel Sciences team created three products, each targeting a different agricultural issue. Their formulas are made of all-natural ingredients which are edible, tasteless and invisible.

“We take the parts of the plant you’re not eating, so that’s stems, leaves, grape skins, an orange peel, etc. and we blend them up and extract a subset of molecules from that blend and turn that into a water-based formulation and then reapply that to the surfaces of the parts of the plant that you are eating,” Rogers said.

The first application of this concept is a water-based molecular camouflage solution called Invisipeel.

According to Rogers, biotic stressors such as bacteria, fungi or insects identify a potential host or food source by looking for certain molecules on the crop’s surface. Invisipeel works by covering crop surfaces with a micro-thin chemically-contrasting mix of molecules, masking the crop from the pest. Instead of using health-hazardous or environmentally detrimental pesticides, Apeel uses natural elements already present in the plant to cloak it from pest detection.

The second agricultural issue addressed by Apeel’s product development is abiotic plagues to fresh produce, which include oxidation, water loss and bruising. In the industrial world, refrigeration is used to slow the breakdown of fresh produce, a technology often unavailable in developing countries.

After founding the company, Rogers enlisted the help of Jenny Du, a fellow postdoctoral researcher, in the Bazan Lab.

“A lot of things, as soon as you pull them off the tree or the mother plant, basically, the clock is ticking on how long it’s going to last,” Jenny Du, Director of Extraction Engineering at Apeel Sciences, said.

To combat this issue, the team created two products to extend the shelf-life of grown goods: Edipeel, a protective finish for picked fruits and vegetables, and Florapeel, an application of a similar formula, but to fresh-cut flowers. Both products work by inhibiting desiccation and oxidation, two main culprits of aging in plants.

“We take natural plant extracts and we turn those into a water-based formulation which we then apply to the surface of the parts of the plant you are eating which acts as an ultra-thin diffusion barrier against water loss and oxidation, allowing the produce to last longer by creating essentially a modified atmosphere inside the produce,” Rogers said.

“I think a good way to boil it down is 50 percent to 55 percent of the specialty produce that we grow ultimately ends up in a landfill, and considering we’re using 80 percent of our freshwater to irrigate that, the problem is obvious,” Rogers said. “I think we saw this as an opportunity to look at an old problem from a new perspective. You have to be willing to take the risk.”

The patented molecular coating approach may also hold potential use in designing a coating to eliminate odor from clothes. The same concept could be useful in preserving fresh-cut fruit, making healthy snacks more accessible.

“There’s cool things you can do with a platform technology like this,” Rogers said. “It makes me excited to be here.”

Above all, the company is most passionate about using their technology to reduce global suffering.

“I think the reason a lot of us are here is because there’s a major opportunity to implement this technology in the developing world for people who don’t have access to any technology,” Rogers said. “So if we could distribute our products as a powder that people can mix with water on location and apply to their produce in order to make it last longer, they can have leverage in some sort of a negotiation with a potential buyer — we think that can uplift a lot of people out of poverty.”

Apeel Sciences hires primarily out of UCSB and looks to work with individuals passionate about their vision.