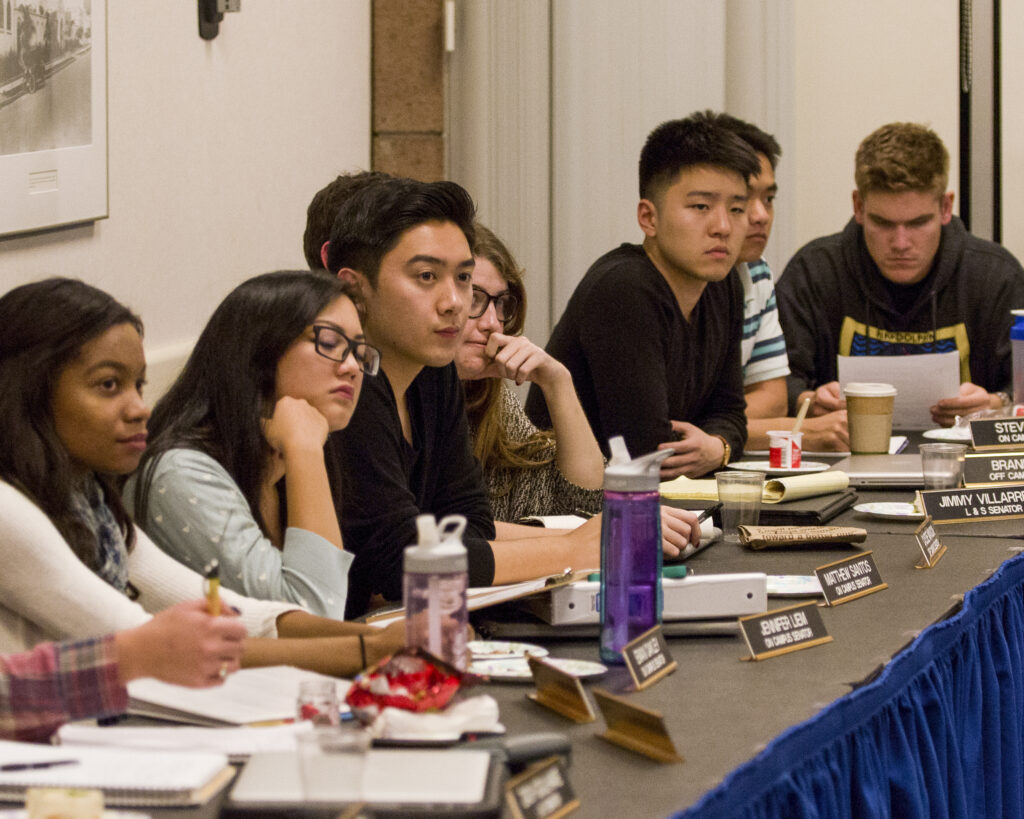 Last night’s A.S. Senate meeting propositions a new entrance to the A.S. Main Office and addresses an IRS ruling to pay A.S. Program Board via stipend. Will Tran/Daily Nexus

The Associated Students Senate met in the Flying A Room at the UCen last night to discuss potential campus construction projects and issues surrounding A.S. Program Board member payment.

Among topics discussed during last night’s meeting was a proposal for new construction of the A.S. Main Office, currently located in the MultiCultural Center (MCC), in order to create a space providing easier access for students. In addition, an Internal Revenue Services (IRS) ruling to pay A.S. Program Board members via stipend instead of honoraria was also addressed.

A.S. President Ali Guthy said her proposal for additional construction to the A.S. Main Office would extend the building to create a new campus entrance.

“This is not an expansion of the presidential office,” Guthy said. “It’s actually demolishing the Office of the President to create a new entrance to A.S. Main [Office] to make it more accessible for students.”

According to Guthy, while there is no money currently underway to be spent on the project until further consultation from all of A.S., she wants to “explore the idea” and has an image in mind for the construction.

“The idea is to create a huge main entrance next to the ticket office,” Guthy said. “Then we would probably enclose that top balcony area to create more of an office/conference room space, because currently it’s really underutilized.”

During the meeting there was also an issue regarding an IRS ruling mandated that A.S. Program Board staff get paid through stipend instead of via honoraria.

Chairman of the Senate’s Finance and Business Committee Jimmy Villarreal said the IRS does not believe the work A.S. Program Board does mandates an honoraria-based salary and that A.S. needs to change the way they are paid.

“The fact that they have staff that directly supervises them … Program Board is one of the few [groups] that actually has a staff and supervision,” Villarreal said. “So for those reasons and others, the IRS doesn’t want them to be paid through honoraria. Instead we’re going to pay them through stipend, or at least that’s the idea right now.”

Guthy said there needs to be a change in A.S. Legal Code language regarding how payment is issued to students in student government.

“I’m actually going to ask some senators … to draft new language for the bylaws to instruct that we are actually managers of our own time and resources,” Guthy said. “That’s a big confusion for the IRS, as they are under the assumption that for stipend-earning students, that we have a staff supervisor.”

According to Guthy, although the IRS disagrees, A.S.’s independence justifies the continuation of their specialized honoraria-based salaries.

“That’s the completely amazing thing about student government is, we are our own bosses and our own supervisors of our own time,” Guthy said. “We don’t report to a staff member.”

In regard to the Program Board stipend issue, A.S. Executive Director Marisela Marquez said she is looking to further discuss how to pay students in A.S.

“I am in the middle of a conversation with execs and finance board … to discuss the budget process as well as a new element, which is the stipend class of students,” Marquez said. “We’ll be discussing that a little bit more.”

External Vice President of Statewide Affairs Melvin Singh also talked about what his office is working on in the coming months, including events and campaigns like Gaucho Consent, which will help educate students about sexual violence. Singh said his office will possibly host a Red My Lips Campaign to bring awareness to sexual assault awareness month in April.

“The idea is combating the slut-shaming that goes on in regards to gender-based violence,” Singh said. “Basically women are invited to wear red lipstick all week or all month to kind of counter that image.”

A version of this story appeared on page 7 of Thursday, January 15, 2015’s print edition of the Daily Nexus.

“Senate Proposes Construction to A.S. Main Office” We definitely did not. President Ali Guthy is exploring the idea, and she proposed the idea to the senate.

This was also not proposed. Ali is doing the research for an idea.

These articles are never really about the main things covered at our meeting, and I expect more from you all at the Nexus.