The Daily Nexus
Sports
Conference Play Continues for Winless Gauchos
January 15, 2015 at 4:15 am by Michael Jorgenson 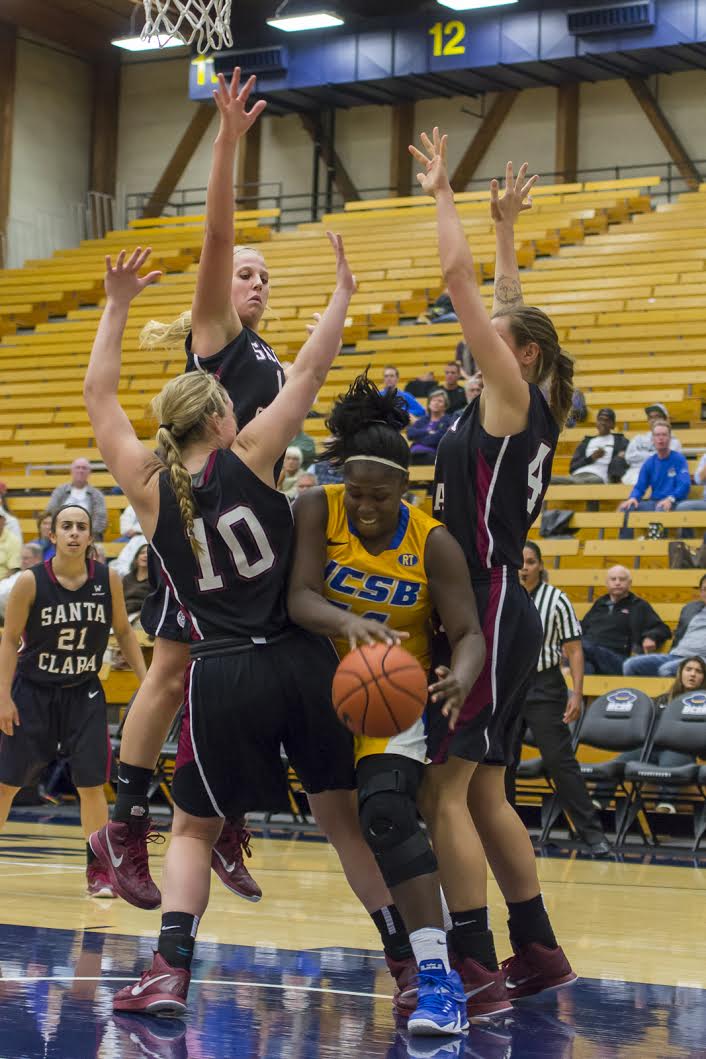 A disappointing, winless first two months of the season doesn’t get any easier this weekend for the UCSB women’s basketball team with a pair of games against the Big West’s top two overall records. The Gauchos will head to Cal State Northridge tonight for a one-game road venture before returning home to play Long Beach State this Saturday.

Santa Barbara has yet to scratch in the win department this season, coming into this weekend at 0-14 overall and 0-1 in the conference. Long Beach, meanwhile, has been a mirror opposite of the Gauchos so far, going a nearly unbeatable 15-1 overall and 2-0 Big West. The Matadors boast the conference’s second-best overall record at 11-5, 1-1.

“I think it’s just small details that are hurting us,” junior guard Jasmine Ware said. “We’ve just got to come into practice every day and focus on the team that we’re playing next and focus on defense and getting better offensively.”

While there have been signs of improvement for UCSB in recent games, it still has yet to figure out a winning formula now with one conference game under its belt. Sophomore point guard Onome Jemerigbe has emerged as a leader on the offensive side, leading the team with averages of 8.1 points per game and 41.1 percent shooting. Ware has provided a strong scoring punch at times as well, recording double-digit scoring performances in the Gauchos’ last two games and averaging a second-best eight points per game for her team.

“Everyone knows that on any given night it could be their name called, but the problem is that right now we don’t have a person who has shown consistently that they will have the ability to step up in the game,” Head Coach Carlene Mitchell said. “At the end of the day, we ask our kids to take the easy shots so when there are contested shots you don’t feel as much pressure to knock those down.”

For UCSB, one of the keys to lowering its -20.4 point differential will be its ability to shoot the ball and defend the three-point line. The Gauchos shoot just 31.8 percent from the field, compared to 44.9 for its opponents. The difference only gets worse from three-point range, as they have allowed teams to shoot an incredible 40 percent from downtown while shooting just 19.4 percent themselves.

Consistently being outrebounded has also held the Gauchos back this season, with the team averaging nearly ten less rebounds per game than opponents.

“The biggest thing for us is that all year long we haven’t rebounded, and we’re turning it over a little more than I would like,” Mitchell said. “If you do both of those things against talented teams then it will be a long day and that’s two things we can control.”

Coming off a 53-46 win over Hawaii last Saturday, the Matadors will host UCSB in their third consecutive home game to open up conference play tonight. A deep backcourt powers this team with senior guards Ashlee Guay, Janae Sharpe and Cinnamon Lister all averaging double-digit scoring. Guay, who leads the way with 15.6 points per game, is just two weeks removed from moving into No. 10 all-time in the Big West in career steals.

“CSUN is the most experienced team in the conference. They have all five starters back and they were the team that represented us in the NCAA last year,” Mitchell said. “We know they’re extremely talented, they have the ability to score in all five positions. It’s one game at a time for us.”

A 7-1 home record for Northridge could spell trouble for the Gauchos. However, UCSB’s inconsistent offense, which has been the main cause for its troubles, has surprisingly been more efficient on the road this season, averaging six points more per game on a higher shooting percentage while turning the ball over less.

“We’re taking it one game at a time,” Ware said. “Northridge plays a lot of zone and it’s something that’s really good on their end so that’s one thing that we’re really focusing in on.”

On Saturday, the Gauchos will welcome an extremely hot Long Beach State to town. The 49ers are currently riding a 13-game winning streak, their longest since 1990-‘91, with their only loss this year coming in an overtime thriller against USC. Their outstanding play heading into Big West play has begun to earn them national recognition, as they tied for 35th in this week’s AP Women’s Basketball Poll.

“I think they’ve proven in the pre-season that they have the skill, the talent, and two or three players coming off the bench to beat the BCS level schools,” Mitchell said. “They’re gonna mix it up defensively, so for us it will be a mindset of handling changing defenses.”

Despite their record, Long Beach does not possess a particularly dominant offense, averaging just 60 points per game on just under 40 percent shooting. Instead, the 49ers rely on their defense to win games, holding opponents to just 23.6 percent shooting from three-point range, good for fourth in the nation. They are also very efficient with the ball, ranking 13th in the nation with a 6.6 turnover margin.

“I think the 0-14 is what’s pushing us to keep going and keep trying to get that win,” Ware said. “Most teams probably would just lay down, but with the type of coaching staff we have and the type of people we are, we’re not going to give up that easy. We’ve still got a lot of games left.”

The Gauchos are set to play Northridge tonight at 7:00 p.m. in the Matadome and will host Long Beach State on Youth Night this Saturday at 2:00 p.m. in the Thunderdome.