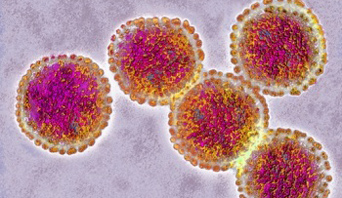 Santa Barbara County announced the first official influenza-related death of this flu season early last week when an elderly man over the age of 65 died due to complications directly caused by influenza.

Public health officials have not yet released the identity of the individual. With influenza cases on the rise in Santa Barbara County, officials continue to encourage preventative action.

According to Deputy Director of the Santa Barbara Department of Public Health Susan Klein-Rothschild, the victim was at a higher risk due to age.

“It’s always sad when somebody dies, especially from something that’s preventable,” Klein-Rothschild said. “The youngest and oldest members of our society are the most at risk of influenza-related deaths. In this case, it was somebody who was over the age of 65.”

According to a press release by the Center for Disease Control and Prevention (CDC), elderly people are at a higher risk of hospitalization.

Klein-Rothschild said there is not currently an epidemic in Santa Barbara County, though the number of influenza cases has continued to rise.

“As of the week of January 3rd, we have had 41 tests for influenza come up positive,” Klein-Rothschild said. “We are seeing regional activity. There has been an up-kick in the number of cases of the flu.”

Due to the rise in hospitalizations and deaths due to influenza, the CDC advises Santa Barbarans to receive preventative vaccinations and seek additional medical help if necessary.

“Nationally the country is likely to continue to experience several more weeks of flu activity as flu spreads to other states that have not yet had significant activity,” the press release stated. “CDC recommends vaccination and rapid treatment with antiviral drugs for people at high risk from flu.”

Klein-Rothschild said limiting influenza illness is important, and there are several ways to prevent the sickness.

“We want to do our best to prevent future deaths,” Klein-Rothschild said. “There are three suggestions I make to protect yourself from getting the flu. First, get vaccinated. Vaccination is the best way to prevent illness. Second, practice good hygiene and wash your hands frequently. Lastly, when you’re sick, stay home so you don’t infect others.”

“We as students should do all we can to ensure that the spread of illness is limited. This means making sure we get vaccinated, wash our hands and of course see a doctor if symptoms persist,” Davidson said. “The most important part in preventing this is of course seeing a doctor if necessary and taking prescribed medication to ensure that the spread of influenza is limited.”