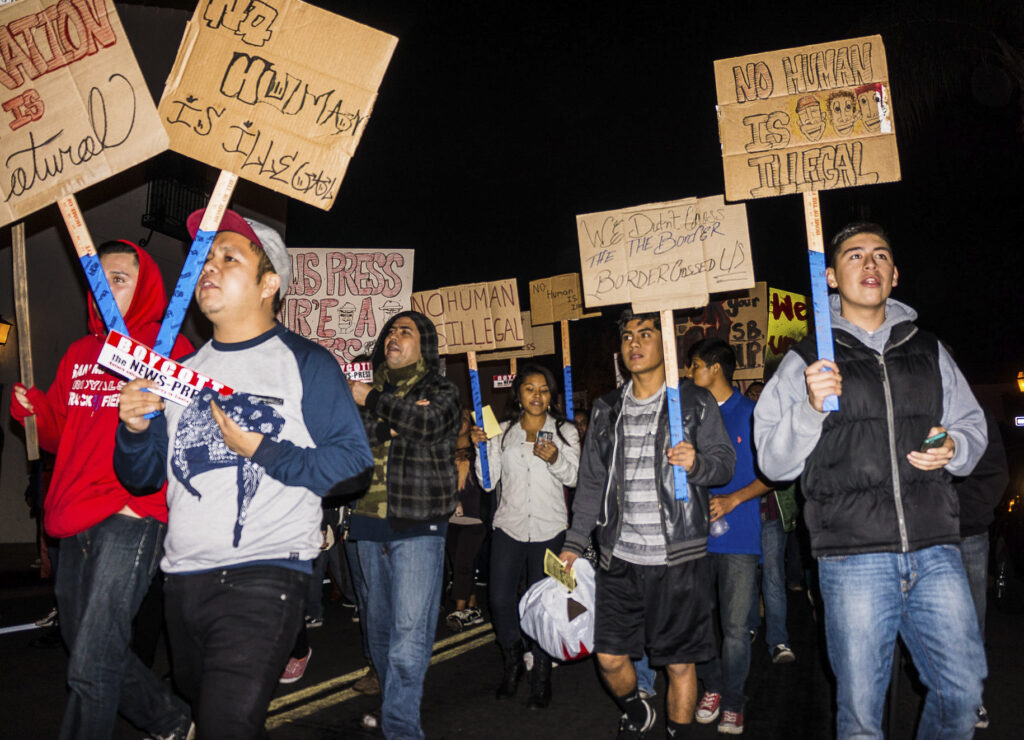 Protesters chanted slogans and urged the boycott of the Santa Barbara News-Press while they marched up State Street on Thursday night. John Clow/Daily Nexus

Students and Santa Barbara residents assembled at De La Guerra Plaza in downtown Santa Barbara Thursday night in a protest against the Santa Barbara News-Press for running an allegedly offensive headline regarding undocumented immigrants in their Jan. 3 issue last Saturday.

The protested article’s headline read “Illegals Sign Up for Drivers License” and discussed Assembly Bill 60, a law which allows undocumented individuals living in California to apply for driver’s licenses through a special program created with the California Department of Motor Vehicles. The protest was organized in part by community advocacy group People Organized for the Defense and Equal Rights of Santa Barbara Youth (PODER) and featured several speakers followed by a peaceful march down State Street in which protesters dressed in Native American clothing and performed by drumming, dancing, shouting and singing.

During the demonstration protesters also chanted, “What do we want? Justice!” and “When do we want it? Now!” in Spanish.

According PODER member and protest speaker Nayra Pacheco, the aim of the protest was to send the News-Press a message condemning using the label “illegals” to characterize undocumented individuals. Pacheco also said nearly 2,000 petitions were signed across the nation calling for a correction to the headline.

“We have signed 2,000 national petitions to make it known that something like this needs to happen in order to see change in the business world like the newspaper,” Pacheco said. “The petition also wants to make the newspaper change it’s wording as well. These terms need to change.”

45-year-old Santa Barbara resident and protester Humberta Ruiz said she thought the headline was disrespectful because it demeans a large demographic in Santa Barbara County.

“It’s important to remember that this is a small town newspaper and they want to make it seem spectacular by making money off of ruining reputations of people,” Ruiz said.

“It makes me feel like we aren’t anything,” Carlos said. “Some people are actually dedicated and don’t live bad lives full of crime. People come here and have dreams.” 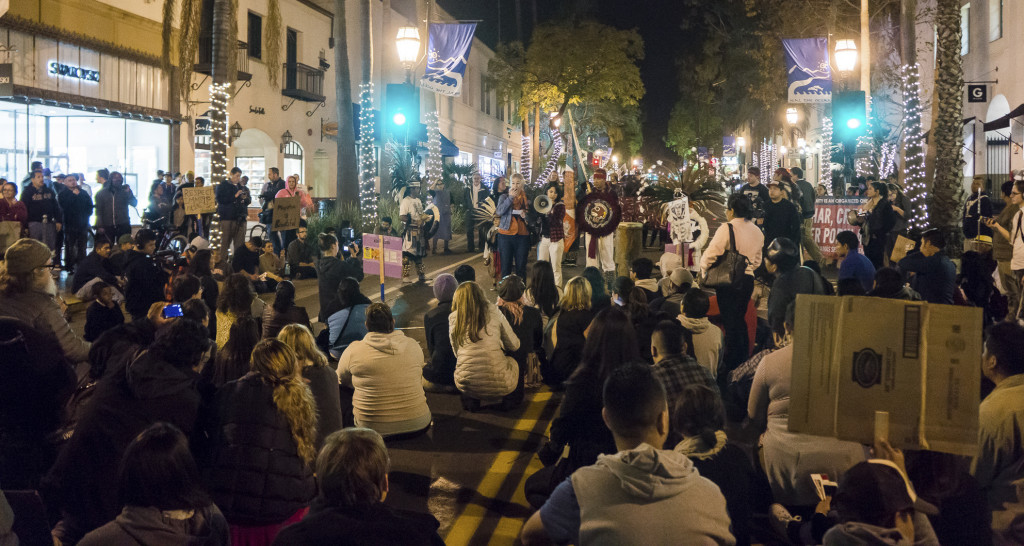 According to Carlos, undocumented individuals should not be considered or treated differently than others living in the U.S.

“We are not different than any other, and we are the same,” Carlos said. “We are part of this. Nobody is better than anybody, and we really are like any other person.”

According to Pacheco, use offensive language by a newspaper is a “big issue” in Santa Barbara and puts residents at risk for stigmatization.

“It has become a custom in news sources to generalize Latinos as gang members, illegals, and imply that every person in that line was illegal,” Pacheco said. “This puts people at risks in their own community who are losing jobs and it is not just a regular headliner. It simply puts innocent people at risk.”

Carlos also said use of the word “illegal” to describe entire groups of people is offensive and hurtful on a national level as well.

“I think it hurts people in the nation as a whole,” Carlos said. “The term ‘illegal’ just offends me and makes me real angry. I am Mexican-American and that’s how I want to be known. I am a normal human being, and not entirely different. We want to change how things are.”

John Michael, 67-year-old Santa Barbara resident and member of the Santa Barbara chapter of Clergy and Laity United for Economic Justice (C.L.U.E.), said that he did not agree with the use of the term, “illegal,” to classify undocumented people.

“People are not illegal,” Michael said, “No human being is illegal.”

Michael also said the characterization of undocumented individuals as “illegals” is “racist,” “terrible,” and politically incorrect.

“From any standpoint, it is wrong to call someone ‘illegal,’ and by law this isn’t improving,” Michael said. “On top of that, it’s discouraging to refer to someone as ‘illegal.’ A person has his or her own word to name something which is separate from the law.”

What a crock. I snuck into Canada for some free meds, treatment for a bunion and cheap maple syrup a few years back. When the Mounties figured out I was in the country illegally (I was denied entry because I was convicted of posession of dope in 1990 – a crime that makes me undesirable in Canada) – they made me feel bad by calling me an “illegal”. Same thing happened in Mexico last year when I did the same thing (only it was Mescal instead of prescription meds) and the Federale beat me up, took my car, threw me… Read more »

Ooh, you went to Canada. Congratulations. What, you want a medal or something?

And what you call clueless, the rest of the world calls people with general intelligence.

You might be able to learn something from them.

Freedom of speech. Interesting that the protest took place on the same day in France where magazine staff members were assassinated for the content.