The Daily Nexus
Opinion
Why I Can’t Make Up My Mind About Technology
January 7, 2015 at 7:48 am by Alyssa Evans 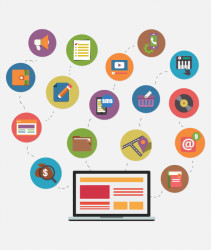 There’s a lot of dissatisfaction with my generation. You don’t value the importance of things. Social media cuts you off from the real world. Technology is dissolving your brain.

They may have a point. My younger brother can spend an entire day in a different world, one where guns eject plasma streams and little aliens run around the screen screaming “WE’RE ALL GONNA DIE!!” There’s a setting my brother particularly loves called “Grunt Birthday Party,” and once this setting is turned on the afore mentioned aliens will, when shot, squeal happily and explode into a pile of confetti. Arguably better than Nazi Zombies. Still a little worrying.

Not that I can talk … My relationship with technology is (bluntly put) unhealthy. I love my phone, but in no way can I justify the amount of time I spend on it — texting, snapping, checking the same news feed over and over again. What worries me most is how my fingers creep to it, craving that meaningless stimulation.

My leading downfall is Netflix. I know everyone has binge sessions and jokes about them, but I still think it’s disturbing that I can let an entire day slip away from me when I put my mind to it. Even worse, although I crave these binge sessions, I don’t feel remotely satisfied after them. Watching an entire season of something in a short period of time is akin to eating Freebirds for both lunch and dinner: it just shouldn’t be done.

And look, I know I’m not the only one who thinks this way. Not understanding our generation is a common trend. I can’t tell you how many times I’ve heard peers say that they don’t think they belong in this time, with these people. Some of this can probably be blamed on the usual feelings of angst (hormones determined to convince us we don’t belong) but I also think a large portion of people are genuinely baffled by our time. It’s hard to take a breather in a world that moves so fast, and it’s even harder to step away from screens when they have become crutches on so many levels. Social media in particular is fascinating because it connects people on the surface while isolating them individually. There have been multiple studies done that show social media has a way of making you feel ultimately worthless. So why do we gravitate towards things that make us feel alone?

I don’t really have an answer. I have a few theories, the primary one being that we’re socially crippled. That sounds a little dramatic, but what I’m trying to convey is this: we have a dysfunctional, and sometimes unhealthy, reliance on technology and social media. We can’t be sure yet how it will affect us in the long run, but it’s interesting to think about, to consider that we may be creeping towards the dystopian societies presented by novelists such as George Orwell and Kurt Vonnegut.

Even more interesting is to consider that we might already be living it. Big Brother could be upon us, and disturbingly, I can’t bring myself to care. Doesn’t it seem so remote? So fictional? Unrealistic really, never mind that NASA spent billions of dollars spying on citizens and it’s now clear the CIA became quite efficient at using torture techniques on possibly innocent people. These things happened, but it’s hard to see if it actually worries anyone. I know I can acknowledge the severity of these actions without feeling the fear that should accompany it.

So we come to the crux of this piece: I can’t make up my mind about technology. On the one hand I can observe the benefits, because technology, for all its presumed evils, has done wonders for aspects of our society. What gives me most pause is the niggling fear that screens ultimately separate us. What if we forget how to empathize properly? An individual’s interest in politics is at an all-time low. Partly because it’s impossible to gather all the necessary information, partly because it’s now cooler to obsess over trivial things like Nicki Minaj’s butt. Then there’s the issue of privacy, because how can there possibly be any semblance of privacy in the world we live in? Technology is a powerful, powerful tool, and there are people out there who have a much better handle on it than you or me.

This turned a little ominous. Let’s end on a good note: look at my brother. He’s 12 and he’s a stand-up guy. He may have a weird obsession with exploding aliens and he may spend far too much time on Minecraft, but he finds time every morning to ask me how I’m doing, and he is somehow (at the age of 12) mature enough to read BBC news every morning. That’s more than I can say for most adults. Not to mention, in between video games he listens to NPR podcasts. And he loves Monty Python. I have the coolest brother in the world.

So, if this susceptible, impressionable little boy can manage to be incredible despite his dependence on technology, I think the world might turn out okay.

Alyssa Evans is keeping her fingers crossed until further notice.