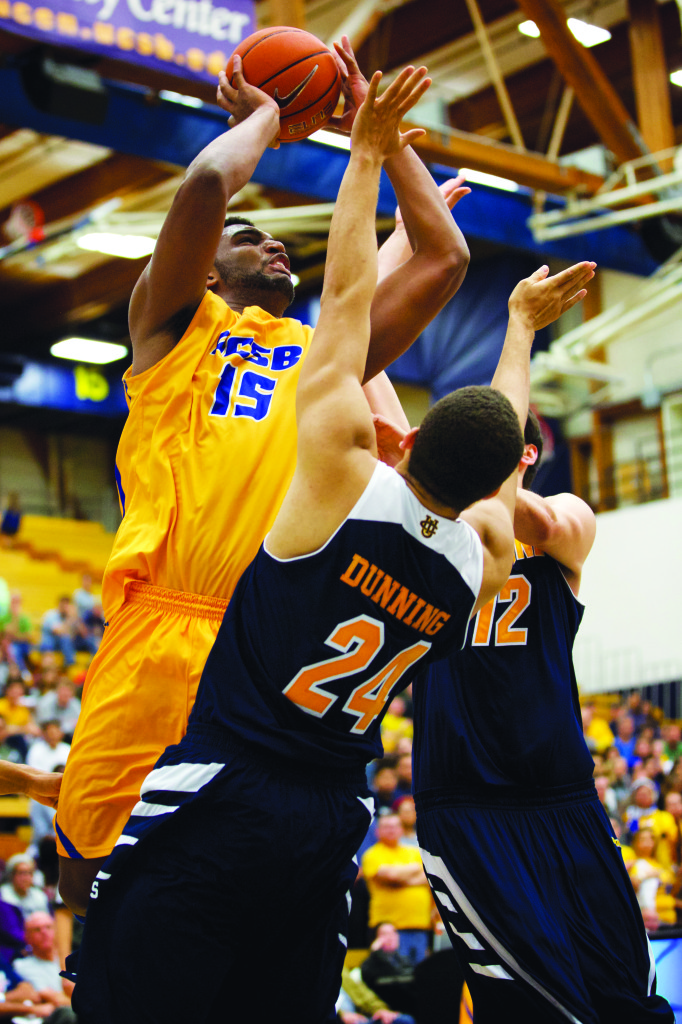 Alan Williams was held to five points in the first half, but finished with 18 on the night. (Daily Nexus File photo)

A lackluster first half performance was too much to overcome for the UCSB men’s basketball team last night at the Thunderdome. The Gauchos were unable to take command of their troubles on offense and contain San Diego’s hot shooting display, losing to the Toreros 79-65.

“[San Diego was] just hitting everything. They were playing well, they were executing,” freshman guard Gabe Vincent said. “It seemed on offense we couldn’t get it going at times. They took full control of this game. We didn’t come out ready to play, our minds weren’t in it.”

With its first home loss of the season, UCSB drops to 4-5 while San Diego improves to 5-5. USD entered as the most challenging opponent the Gauchos have faced at home so far, and took advantage of Santa Barbara’s sluggish start to the game.

San Diego shot 71 percent from three-point range — making 10 on 14 attempts — and 46 percent overall for the game, compared to the Gauchos’ 40 percent shooting from the field. Most of the Torero’s damage on the perimeter came courtesy of their starting backcourt in seniors Johnny Dee and Chris Anderson.

Both players were points of emphasis on defense coming into the game, however, the Gauchos failed to neutralize both, with each shooting 3-4 from beyond the arc. Dee finished as the leading scorer of the game with 22 points and added six rebounds; Anderson totaled 17 points, second most on the team.

“[Dee] had big shots and Chris Anderson got it going as well coming off ball screens,” junior guard John Green said. “We just weren’t ready to play at those times and moments when they came up big for their teams.”

An uncharacteristic first half from senior center Alan Williams also contributed to the Gauchos’ lack of scoring. Big Al looked flustered in the half, scoring only five points and turning the ball over on four occasions.

UCSB trailed 41-26 out of the break, but responded primarily with Big Al and junior guard Michael Bryson. Bryson ended the first half with no points but poured in 13 in the second.

Williams’ bounced back, falling just short of a double-double with 18 points and eight rebounds.

A key turning point came early in the half when Vincent, one of the team’s best scorers, picked up his fourth foul two minutes in, sending him to the bench. Vincent did not return until the 10 minute mark with the Gauchos trailing 53-44, ultimately fouling out later on.

UCSB trailed 57-50 with less than seven minutes to play, but like how most of the game went, as the Gauchos crept closer, the Toreros kept knocking down shots to further the distance, ultimately putting Santa Barbara away.

“This was a disappointing performance on our part, very disappointing,” coach Williams said. “…We better use it as learning experience. We hope they respond to it and we hope that they take responsibility.”

With two losses in both games played this week, the Gauchos now take a full week off and are back in action next Friday at home against San Diego Christian.